A WELL-KNOWN RESULT, BUT WITH AN UNUSUAL STORY: HOW SENNA BECAME A SUPERKART CHAMPION, 39 YEARS AGO

In December 1982, Ayrton Senna already was one of the biggest names in Brazilian motor sports. The driver had already won both the British and the European Formula Ford 2000 titles that season, and was expected to be a serious contender in the 1983 British F3 championship.

But even as he inched closer and closer to Formula One, Senna was still very much in love with karting, and was invited to take part in a special closing race for the Superkarts season, a category that had just been created in Brazil.

During the practice sessions, Senna showed his adversaries had their work cut out for them. Even though he had never driven that type of go-kart, with two 125cc engines and full livery, Ayrton scored the pole position, with a time of 46s43, braking the record of the Interlagos go-Kart track, which now is named after him. All other drivers were a second or more behind Senna.

In the first heat, Ayrton was caught up in a crash at the start, along with 20 other go-karts, and was forced to make up for the lost time. He fell down to 11th place, but was able to finish in third. 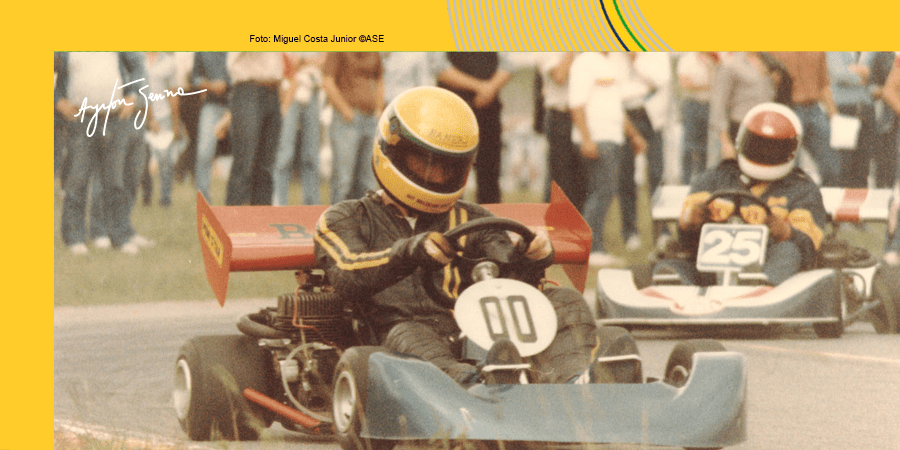 In the second qualifying race, Senna took the lead in the first lap, and stayed there until the end. IN the final heat, now with just 30 drivers, Senna started in fourth and once again took the lead right at the start. From then on, he put up a show at Interlagos and won with a 15-second advantage over the runner up, Carol Figueredo, one of the greatest go-kart drivers at the time.

After celebrating the win, Senna gave a press conference, in which he stressed the importance of karting: “Karting is, more than anything, a school. And, sometimes, it’s good to go back”, joked Senna, who, in the previous month, had won the Pan-American Go-Kart Championship at the Tarumã go-kart track, in Rio Grande do Sul.

When he was given the trophy, on the podium, Senna made sure to give the prize to Carol. “I was just a guest at this party and it made no sense for me to take home the trophy. The real prize was being able to take part in the race, along with so many talented drivers”, said Senna to O Globo newspaper.

Tributes to Ayrton Senna on 05/01 are highlighted in Cristo Redentor, in soccer and with relics in social networks