On October 1, Nike and Corinthians unveil a never-before-seen collection honoring Ayrton Senna, including the team’s new third kit. The collection #LuteAtéSerEterno [fight until you’re eternal] is a tribute to the 30th anniversary of the driver’s first world title, which he won at Suzuka, in Japan.

In a partnership with the Ayrton Senna Institute, the collection is inspired in the color scheme of the Lotus, which is considered one of the most beautiful F1 race cars ever. Ayrton raced for the team in the 1985 and the 1986 seasons. Knowing that sports are an important educational tool, Nike and Corinthians will revert part of the revenue from the Nike Corinthians Ayrton Senna Collection to initiatives of the Institute. 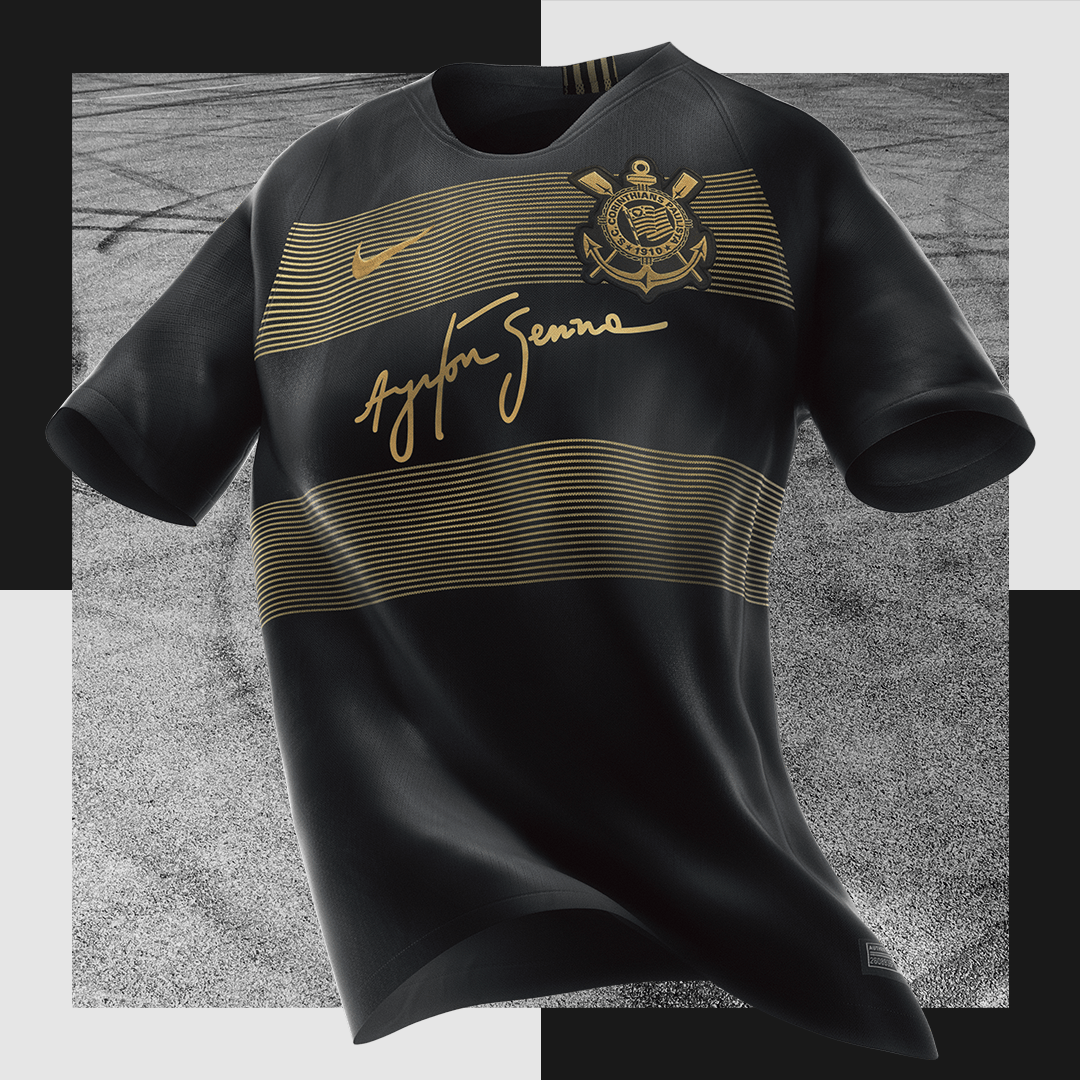 The third Jersey has a crew neck and is predominantly black with golden accents, with lines in the same tone as the ones in the car. These lines adorn the front part of the jersey, and they represent each of the driver’s 41 wins throughout his career.

Inside the collar, in the back of the Jersey, the text SENNA SEMPRE [Senna forever] alludes to the driver’s everlasting legacy. The shorts, which are all black with golden accents, along with the socks in the same color, have “ETERNO” [eternal] written on them, completing the kit.

“It’s very special to be acknowledged in such a strong way by a team like Corinthians and a brand like Nike. It’s very gratifying to develop items that not only honor a historic achievement but are also part of an inspirational campaign, motivating everyone to fight for their goals and overcome their limits, just like Ayrton Senna did”, says Bianca Senna, the Branding Director for Ayrton Senna, the Ayrton Senna institute and Senninha.

Gustavo Viana, the Football Director for Nike Brazil, thinks the tribute also proves that the driver still influences several generations. “Ayrton is still present in the memories of Brazilians, and now this connection will be seen in one of the most relevant jerseys in the world of football”, says the Director.

“It’s a beautiful tribute to the amazing trajectory of a great driver, Brazilian and Corinthians fan, who fought, lost and won, but never gave up from doing his best.  It’s like the plaque in his honor at Parque São Jorge says: ‘In the chest of a cold driver, beat the heart of a Corinthians fan’”, celebrates Luiz Paulo Rosenberg, Marketing Director for Corinthians.

The complete collections, which also includes a jacket, a casual shirt and a cap, is available for purchase starting today, October 1, at Nike.com and at the Arena Corinthians store. Starting on October 4, it will be available at other stores.

Fans out of Brazil:

We’re very happy with the fact that the launch of the special Corinthians collection honoring Ayrton Senna, an icon who transcends motor sports and sports in general, has generated interest in other territories. But, for now, this effort is focused on Brazil, and lead by Corinthians, the Ayrton Senna Institute and Nike”.