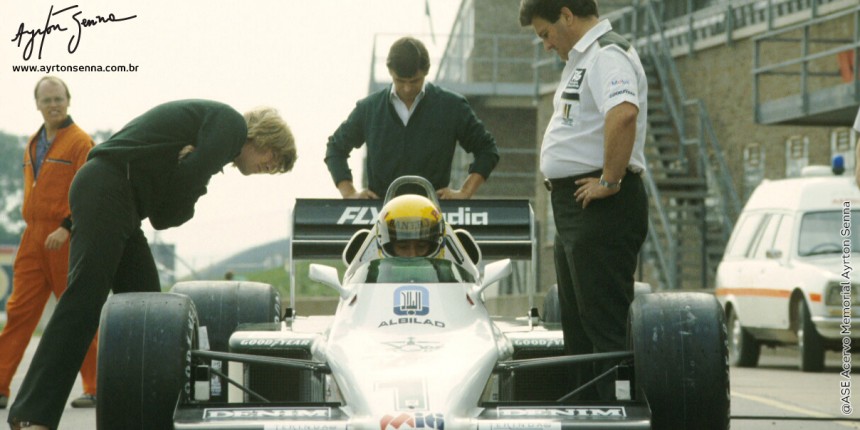 1983 was one of the most important years in Ayrton Senna’s career. It was a real watershed, since was when he made his first test with an F1 car, a Williams– the previous year’s champions – in Donington Park. That’s the most widely known one – it was even filmed by a TV Globo news team, headed by journalist Reginaldo Leme – but the Brazilian driver had three more test sessions with F1 teams, that year.

Besides the Williams test, in which he broke the track’s record and completed a few laps faster than the team’s main drivers, Senna also drove McLaren’s, Toleman’s and Brabham’s cars. As if these amazing tests weren’t enough the São Paulo-born driver was also the 1983 British F3 champion.

In November 14th, 1983, when he was about to decide for which team he’d make his 1984 F1 debut, Ayrton had his last test with a 1983 car. This time, the machine was the Brabham-BMW driven by Nelson Piquet, who had just become a two-time F1 champion.

The test took place in Paul Ricard, France, a regular stop in the F1 championship, at the time. Ayrton was invited by Bernie Ecclestone, the team’s principal, to take a few laps, along with other drivers, like Colombian Roberto Guerrero and Italians Mauro Baldi and Pierluigi Martini.

At McLaren, Senna made a big impression, as Ron Dennis admitted years later, when hiring him as main driver for the 1988 season – the year Senna won his first F1 title. Two other drivers were invited for the same session – Britton Martin Brundle and German Stefan Belof – but Senna remained unflappable and was quicker than both. Finally, the Brazilian had a test with Toleman.

During the session, also held at Silverstone, Senna was faster than the team’s main driver, Britton Derek Warwick, both on dry and wet conditions. Senna finished his best lap in 1m11s5000. He ended up signing with Toleman for his debut at the category in the 1984 season.

Formula 1 before and after Senna