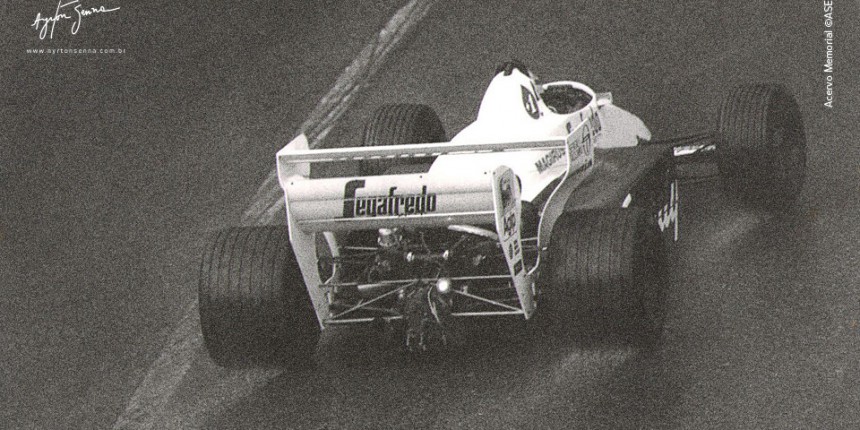 It was already a noteworthy debut season: Ayrton Senna had scored points at the Belgian and South African Grands Prix with his Toleman. He finished sixth in both races – no small feat, considering the first one, in Kyalami, had been just his second race ever in Formula One. The good results made the Brazilian confident enough to start building a name for himself in the year of his debut, 1984, but what was about to happen on the streets of Monte Carlo would place, for the first time, Ayrton Senna among the biggest names in the category.

After qualifying, Senna sat down on the low wall of Monte Carlo’s improvised garages and started going over the starting grid:

“I believe this number will one day bring me some luck.”

The number was 13, of his 13th placing in the starting grid, as had already happened in South Africa and in France.

The first row had McLaren’s Alain Prost and Lotus’ Nigel Mansell. The second row had Ferrari’s Rene Arnoux and Michele Alboreto. Derek Warwick and Patrick Tambay, both driving for Renault, were going to start from the third row.

The race officials decided to postpone the start of the race in 45 minutes due to the rainstorm falling over Monte Carlo. The race started under a downpour, the perfect stage for Senna’s first spectacular Formula 1 race.

Soon after the start, Ayrton began to gain ground. He finished the first lap in 9th place. And, by lap 10, he was already in 7th.

At the front of the pack, the duel was between Prost and Mansell. The Britton took the lead on the 8th lap and peeled away from the rival.

From then on, it was Ayrton’s rave. The Brazilian entered the points-scoring zone when Michele Alboreto had car trouble. Right after that, things looked harder since he had to pass 1982’s world champion, Keke Rosberg. Ayrton, however, went for it and elegantly overtook the Finn. 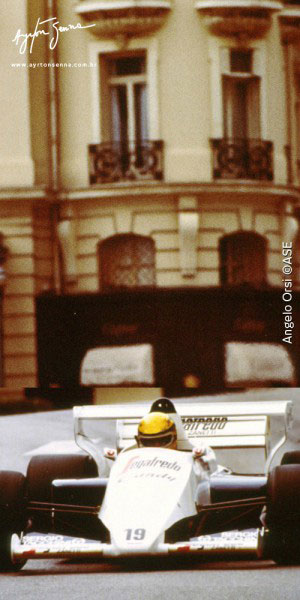 On lap 14, Arnoux also ceded to pressure by Senna, who was much faster than the competition and started being followed by the TV cameras. He was the race’s protagonist, despite his lack of F1 experience and his rookie status in Monte Carlo.

Soon after that, on lap 16, the race’s leader, Mansell, showed how hard it was to keep an F1 car on that track: the Britton lost control of his Lotus and found the guard rail near the Casino Turn. That meant Senna was already on the podium, in third place.

Prost took back the lead, followed by Lauda – both from the team to beat that year (Mc Laren) – with Senna in third. The crowd watched in disbelief as Senna gave a masterclass in wet track driving.

The Brazilian got closer and closer to Lauda. And, at the start of lap 19, he made an incredible passing on the outside of Saint devote corner. No one could believe that a Toleman was able to beat a McLaren, the car that had won four out of five races that year.

Passing each driver, one by one, Senna had a new mission: close in on the race’s leader,  Alain Prost, from McLaren. And that’s exactly what he did in Monte Carlo. It was a marvelous performance: Senna shone on a race track where all other drivers had a hard time.

Such was his superiority that, on the 24th lap, Senna scored the quickest lap, with 1min54s334 – the first in his career.

On the 31st lap, when he was ready to take the lead, things took an unfortunate turn: the race was called off by the race director, Jacky Ickx, due to track conditions, with Prost in first, Senna in second and Stefan Bellof in third –the German driver  would later be disqualified due to car irregularities, placing Arnoux in third. It was Senna’s first ever F1 podium-finish – to be followed by more than 80 of them.

As far as the championship went, only half of the points from the second placing were tallied. But that was incidental: the world would look more closely at the talented Brazilian driver from then on.

Had 13 been his lucky number after all? Senna made a face in disagreement:

At the end of the year, however, the points Prost failed to gain when the race was cut short would be sorely missed. After all, he lost the title to his McLaren teammate, Niki Lauda, for half a point. The Frenchman would have been a champion even if he had finished in second place, and Senna in first, after a full race, since he would have scored six points, instead of 4.5. It was the start, even if in a roundabout way, of one of the biggest rivalries in sports history. 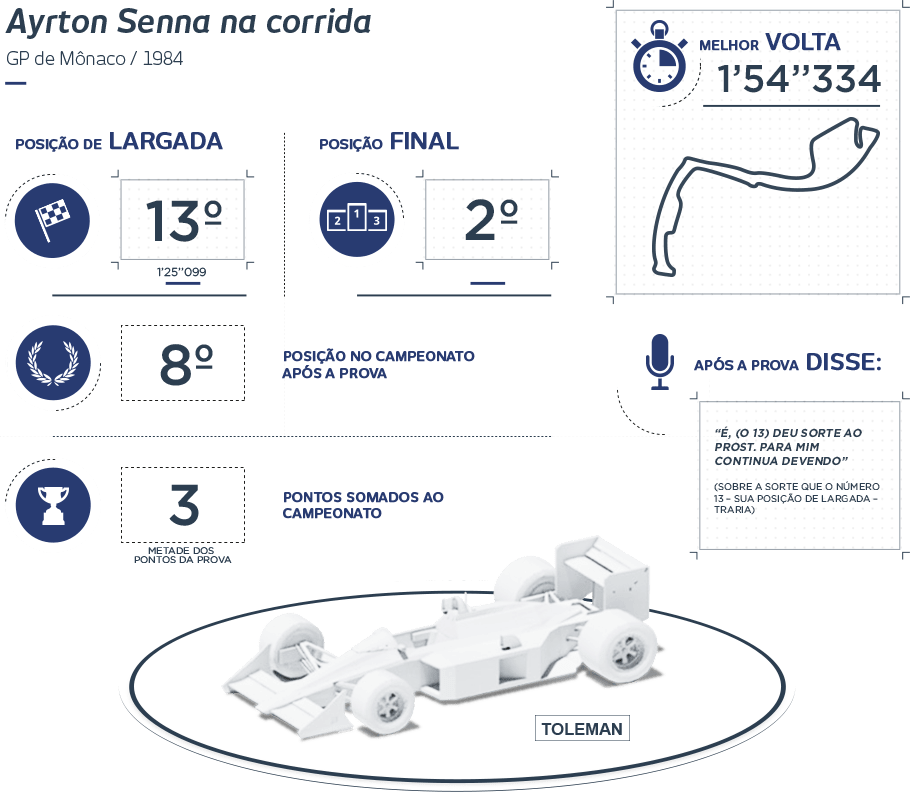