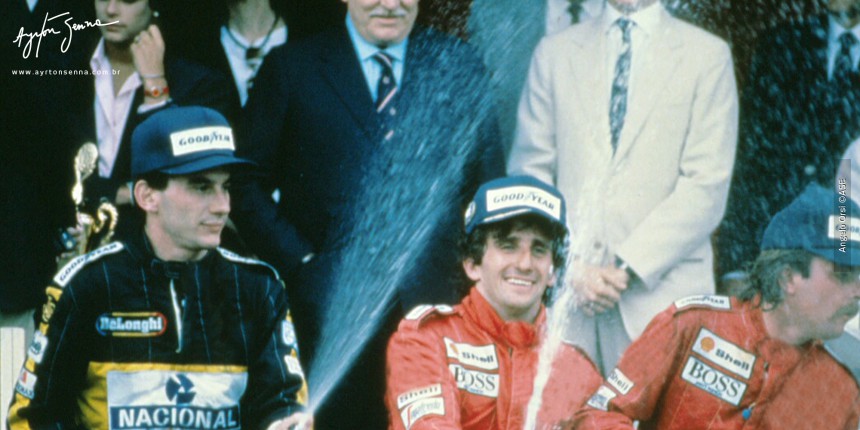 The 1986 season was marked by Brazilian one-twos that made clear that the country had two high level drivers racing to win in the major motor racing category – Ayrton Senna and Nelson Piquet. The title didn’t come to Brazil in ’86, but they scored three one-twos, starting right at the first Grand Prix of the season, in Rio de Janeiro’s Jacarepaguá raceway. The other two took place in Germany and Hungary..

Facing problems similar to those in 1985, in which the Renault engine was not reliable in handling challenges over the course of an entire race, Senna secured two victories, in Spain`s Jerez de la Frontera and in Detroit, USA. At the American race, Senna did something that would become a trademark throughout his career: holding up the Brazilian flag to celebrate a victory. The first time that happened, the Brazilian national soccer team was facing France for the 1986 World Cup quarterfinals, and ended up losing the penalty shoot-out. Ayrton described what happened at the Roda Viva TV show, aired in December 15th 1986 on TV Cultura.

“It was 1h50 PM. I entered the pit garage very slowly. I had just scored the pole-position, and an engineer was holding a sign that said “Brazil 1-0 France”. Brazil had just scored a goal. I got out of the car and went straight to my hotel room to watch the match. I had a press conference to go to. They got pissed off! They said I didn`t care about the press. I all I wanted to do was watch the match. My car designer is French and all the Renault engineers were French (laughs). Conclusion: after the match, I didn’t even show up at the garage where the guys spent the afternoon preparing the car for the following day, because I knew they were going to give me a hard time, right? So I didn’t go to the garage until Sunday morning, for the race, because Brazil was out of the World Cup. But thankfully we won the race. And the interesting thing was there were a lot of Brazilians there. When I crossed the finish line, and slowed down, I was spent. It was a physically demanding race. And I saw a Brazilian guy on the other side of the fence, behind the marshal, holding a Brazilian flag. Then, my instincts took over. I stopped and waved to the guy beyond the fence, but he couldn’t come. The marshal next to me didn’t understand anything. I said [changing his voice to sound like he was calling from far away]: “flag!” Until the marshal looked at me, looked at the guy and got it. Then the marshal went up there and took the flag from the fan who had climbed the fence. He understood me, and that’s the wonderful thing, isn’t it? The fan brought me the flag and I took a lap with it”, said Senna.

In 1986, Senna also climbed on the podium six times and did eight pole-positions – half of the possible ones, an incredible feat. The Lotus driver finished the championship in fourth place, with 55 points, behind champion Alain Prost, Nigel Mansell and Nelson Piquet.

When asked in Roda Viva if he deserved all the credit for closing out the season in fourth place, Ayrton was emphatic: “No. In Formula One, no one person is the sole responsible for anything. The credit goes to the whole team – the engineers, the designers, the sponsors who fund the equipment, the engine and tire suppliers… Anyway, it’s a whole host of people.”

Senna was also asked if, the following year (1987), he would face more pressure in Brazil to be world champion. As usual, he showed great confidence in his work: “No one puts more pressure on me to win the championship than myself”.

The biggest change for the following year would be an engine switch. Lotus would stop using Renault motors and start using the Honda ones that would rule F1 for the next few years, winning with Piquet in 1987, for Williams, and scoring four world-titles with McLaren, three of them by Ayrton Senna (1988, 1990 and 1991).

The first time Senna lifted the Brazilian flag in F1