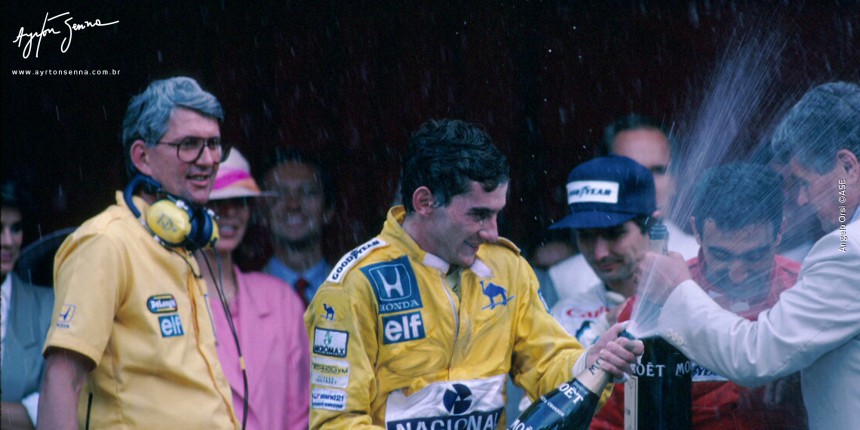 Senna was excited about the new Honda engines at the start of his third and last season with Lotus, but ended up watching the gradual decline of his car’s competitiveness up to the final races of the season. The Brazilian finished the World Drivers’ Championship in third place, with 57 points, two wins and eight podium finishes. Senna was only behind Piquet (57) and Mansell (61). Alain Prost was fourth in the final standings, with 46 points.

The season’s opening race took place in Rio the Janeiro, Brazil, on April 12th. Ayrton led for a few laps, and held on to second place for most of the race. But an engine problem stopped him from climbing back on the podium in his home country.

In San Marino, Senna scored his only pole position of the year – the first ever by a car with active suspension. During the race, however, the quality of the Williams spoke louder, and Nigel Masell won. Senna had a good race and finished in second.

In Belgium, Senna started better than Mansell. But as the Britton tried to get back in the lead during the first lap, both drivers ended up crashing and retiring from the race. The Brazilian would recover two weeks later, with a historic win in Monaco.  Ayrton was – and still is – the first Brazilian driver to ever win an F1 race in the Principality.

Ayrton jumped to the top of the overall standings after winning the Detroit GP. Once again, the Brazilian beat Nigel Mansell and scored his second triumph in the streets of the US.

His Lotus didn’t perform as well as in the previous races, and Senna finished the French GP, at Paul Ricard, in fourth place. At Silverstone, the season`s seventh race, Ayrton finished in third – it was the last time he would lead the championship. He had 31 points, Mansell and Piquet had 30 each and Prost had 26.

Nelson took the championship’s lead at Hockenheim after a victory and a third place finish by Senna. In Hungary, both Brazilians repeated the previous year’s one-two, once again with Piquet in first.

The year’s tenth race took place in Austria, on a track that favored the Williams’ stability. Mansell won, and Piquet was second. Senna finished in fifth place.

In Italy, Nelson Piquet and Ayrton Senna fought an incredible duel. Eight laps from the end, the Lotus driver’s was ahead. But a mistake on the Parabolica corner made it easy for Piquet to overtake him, bringing him even closer to the title.

The following race, at Estoril (Portugal), was won by Prost, with McLaren. The race was marked by Gerhard Berger’s first pole position – he finished in second place, with Ferrari. Piquet finished in third and Senna scored a modest seventh place.

The Spanish GP had witnessed the most exciting finish in the history of Formula One in the previous year, in a dispute between Senna and Mansell. This time, victory went to the “Lion”. The Lotus’ performance kept getting worse, due to the team’s lack of investment in the car. Senna started the race in fifth place, the same position in which he finished it.

The race in Mexico put Mansell back in the fight for the title. The Britton won again and the gap between him and Piquet shrunk from 18 to 12 points, two races away from the end of the season. Ayrton left the race just nine laps before the end.

In the next to last GP, in Suzuka (Japan), Senna had one of his best races in the season. He started in seventh place and finished in second. Victory went to Berger, who had also secured the pole position. Since Mansell had an accident during the Friday qualifying sessions, Piquet didn`t even had to race to become champion, frustrating the Japanese audience.

The season`s final race took place on the streets of Adelaide, in Austria. Berger won again, and several of the main drivers didn`t even score any points. Ayrton was disqualified due to an irregularity in his brake pads. Piquet and Prost retired due to brake issues. And Mansell didn`t even race, since he was recovering from the crash in Japan.

That year, Ayrton Senna signed a contract to race for McLaren starting in 1988, initiating the most victorious period in his Formula One career.