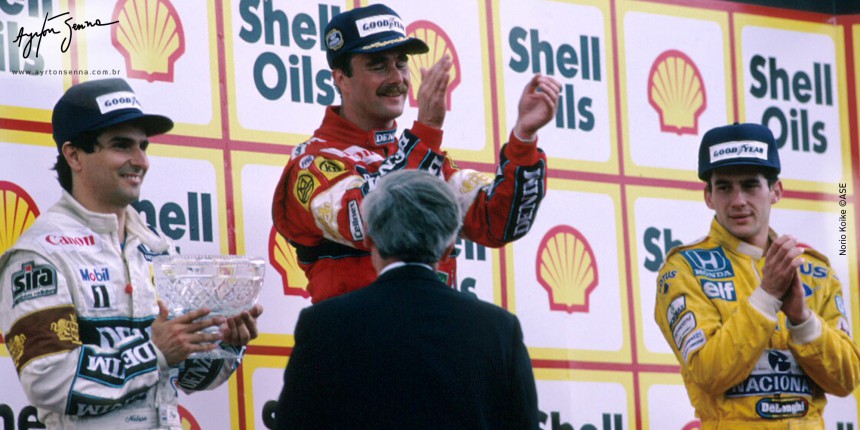 As the championship’s leader before the British Grand Prix, the season’s seventh race, Ayrton Senna knew how hard it would be to face the Williams in a race without any incidents. The Brazilian’s victories with Lotus, in 1987, had taken place in Monaco and Detroit, both street circuits, where the driver had proven to be a cut above the competition.

Even though he had won several times at Silverstone in the entry categories to Formula One (Formula Ford and F3), Ayrton had never even finished in the top-three at one of his favorite circuits since his F1 debut. But there was an explanation for that: Silverstone and Brands Hatch took turns hosting the British GP – a tradition that would end in 1987. Therefore Senna had driven an F1 racecar at the UK’s most celebrated track only once, in 1985, when his Lotus led the race up until lap 59 – six away from the end – but had to retire after running out of gas.

In the qualifying sessions, the Williams confirmed their status as favorites. Nelson Piquet secured the pole position with a time of 1min07s110. Nigel Mansell was just 0s70 slower than his teammate. Senna would be in the third row, right alongside Alain Prost. The first three had Honda engines, which was crucial in a fast track like Silverstone.

On Sunday, Silverstone were packed to capacity. The British audience was looking forward to a victory by their home driver, Nigel Mansell, especially after the “Lion” had won the previous GP, one week earlier at Paul Ricard, France.

At the start, Prost got more traction and took the lead with his McLaren, only to be overtaken a few corners later by Piquet and Mansell, who regained their original positions. Senna finished the first lap in fourth place.

As soon as the second lap started, Ayrton Senna passed Prost, who shadowed him for a few more laps. And even before the fifth lap was over, the McLaren driver returned the favor, taking back the third position. Those were the first stages of a beautiful duel that would thrill F1 fans for years to come.

With Prost and Senna fighting it out, both Williams distanced themselves from the rest of the pack. On lap 12, Mansell started complaining to his team about tire issues. Goodyear, that season’s tire-maker, had assure the teams that they should be able to finish all 65 laps without any trouble. That meant that a pit-stop could be a huge setback for any driver.

Even though Mansell was reporting vibrations in his car, Piquet wasn’t able to put much space between the two of them, and the Britton didn’t leave his rearview mirror for the 20 initial laps.

The Williams mechanics were on standby for a possible pit-stop by Mansell, but that only happened on lap 35, when his tires gave out completely.

Even before that, Alain Prost had been the first among the leaders to make a stop, on lap 29. The Frenchman had been pushing his car too hard, which allowed him to gain 10 seconds on Senna, but he ended up squandering that advantage to change his tires. The 1986 champion returned in fifth place, behind Alboreto (Ferrari), and would have to climb his way to the top-three all over again.

Prost kept up a good pace and soon was back in fourth place, 13s behind Senna after 34 laps. Mansell also came back from his pit-stop with a fast car. Racing at home, the driver started posting one quickest lap after the other, chasing down Piquet.

At the end of lap 42, Piquet was 23s7 ahead of Mansell. Nelson’s strategy was to keep the same set of tires until the end. Senna was still 13s ahead of Prost, who couldn’t get any closer to the Lotus even with a new set of tires.

In eight laps, the gap between Mansell and Piquet shrank to 10 s, and the British crowd started to believe that the “Lion” could actually win. On lap 54, Prost had engine issues and was forced to retire. Senna’s third-place finish was pretty much a guarantee, since Alboreto also had had problems and left the race two laps before the Frenchman. Japanese driver Satoru Nakajima (Lotus) had the fourth place handed to him on a silver platter, making Honda’s party complete – the company provided engines to all the race’s top-four drivers.

On lap 58, just eight away from the end, Mansell posted once again the quickest lap in the race, with 1min09s832, finally reaching Piquet.

His triumphant passing maneuver came on lap 63, two away from the end. Close to the Stowe corner, Mansell tricked Piquet, pretending he was going to attack from the outside. Instead, he moved his car to inside of the track, in a very narrow space, taking the lead. They almost collided, which would make Senna the winner.

Mansell won the British Grand Prix for the second time in a row – the Britton had already won at Brands Hatch in the previous year – securing the second place in the standings. Senna, who finished in third, kept the tournament’s lead, with 31 points, only one more than Mansell and Piquet, who were tied.

After crossing the finish line, Mansell stopped his car close to the place where he had just overtaken his teammate and kissed the pavement, making the fans that had stormed the track go wild.

What did he say after the race
“The two Williams were much superior and there wasn’t much I could do to oppose them.” 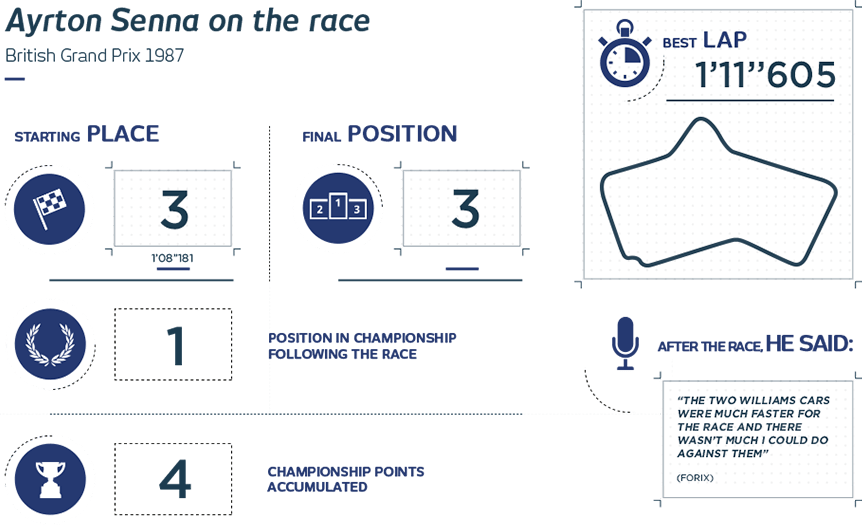