After tem race in the 1987 season, Nelson Piquet (Williams) was at the top of the standings, with 54 points, followed by Ayrton Senna in second, with 43, and Nigel Mansell (Williams) in third, with 39, and Alain Prost (McLaren) in fourth, with 31 points.

The 11th Grand Prix, at Monza, favored those teams that used Honda engines, the strongest at the time, especially due to the Italian track’s long straights. It was no secret that Williams had a better car, but the problems that would plague the team on the following year were starting to show – it was in Italy that the Japanese announced they wouldn’t be providing engines for the team owned by Frank Williams in ’88. 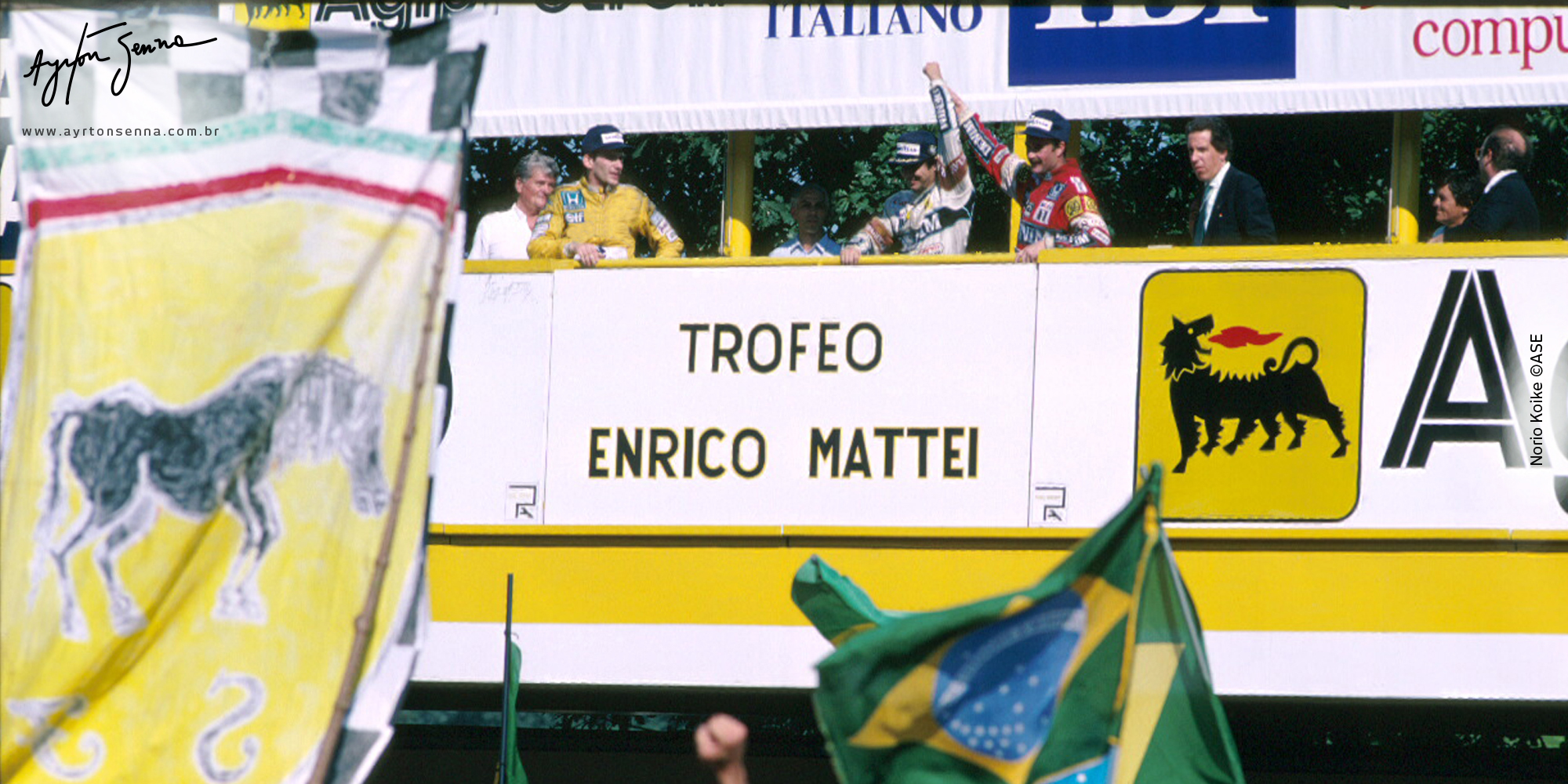 Despite the incipient crisis, Piquet and Mansell staked their claim on the first row. Piquet beat Mansell for just 0s099 to secure the pole position. Gerhard Berger would be starting in third, in aa surprisingly good performance by Ferrari, and Ayrton Senna was in fourth. The Brazilian’s Lotus wasn’t performing very well at the qualifying sessions, unlike in the previous year, when he scored several pole positions. The third row had Prost in fifth place and Thierry Boutsen (Benetton) in sixth.

At the end of the qualifying session, when Ayrton Senna returned to the boxes, the engineer, Gérard Ducarouge, scratched his chin analyzing the grid.  Together, Senna and Ducarouge thought, calculated and arrived at the conclusion that a driver would only have a chance at victory if he did not change tires during the race. The engineer was well aware of the danger of racing on worn tires, especially on that track. Senna didn’t hear him, or pretended not to.

It was a bold plan, but it could work. At the start, Piquet took a while to move. Mansell took the lead but made a mistake when shifting gears even before the first corner, and his teammate recovered his original position. Senna had a bad start and was overtaken by Alain Prost and Thierry Boutsen – the Belgian had just jumped from sixth to fourth place. Prost remained in fifth.

On the second lap, Mansell had to hold Berger back, and the Brtitton ended up making a mistake at the second Variante. To avoid crashing, the Asutrian was forced to brake, but he still bumped into Mansell. That set the stage for a beautiful maneuver by Boutsen, who overtook both rivals and jumped to second place, behind Piquet.

Before the second lap was over, Berger took advantage of Mansell’s momentary confusion and took the third place. Meanwhile, Ayrton Senna trailed Prost, trying to find space to take the fifth position.

On lap four, Satoru Nakajima, Senna’s Lotus teammate, stopped at the gravel trap and lost the front of the pack from sight. The Japanese driver still managed to return to the race.

In the very next lap, Ayrton Senna went after Prost and took the fifth place at the Variante Ascari. Two laps later, Ferrari’s Michele Alboreto also took advantage of Prost’s poor performance and overtook the Frenchman to enter the points-scoring zone.

On lap 17, Mansell stepped up and passed Berger’s Ferrari at the pit lane straight. Right after that, the Britton put his Honda engine to good use and overtook Boutsen, regaining his original position in the race.

The 21st lap marked the start of Senna’s successful strategy. In less than four laps, he gained three positions. Mansell made a pit-stop that lasted more than 11 seconds, returning behind the Brazilian, who was already on Berger’s and Boutsen’s heels. At the end of the 22nd lap, Senna overtook the Austrian at the main straight. And at the middle of the following lap, he passed Boutsen and secured the second position.

Both drivers felt that they were being outperformed by Senna’s Lotus and decided to change tires on the following lap, which basically took them out of contention for the win.

It seemed like Piquet, in the lead, had his 20th win in F1 all but assured. But his pit-stop at the end of lap 23 meant he lost the lead to Senna.

Piquet came back just a second ahead of Mansell, who was in third, while had a 10 second advantage over his fellow Brazilian.

The gap shrunk over the following laps, but Senna held on to a 5-second advantage, and was able to keep the lead until the 43rd lap, when he made a mistake and Piquet took the lead. Ayrton was trying to pass Ligier’s Percarlo Ghinzani, a backmarker, at the Parabolica corner, but the Lotus driver was let down by his tires and ended up at the gravel trap. Ayrton was able to return to the track, but the lead already belonged to Piquet.

At that point, Mansell wasn’t able to keep the pace from before his pit-stop and didn’t pose a threat to Ayrton.

Even with his Lotus covered in dirt and pebbles, Ayrton still wanted to win. There were seven laps left, and the Lotus driver went after Nelson. Ayrton was able to gain three seconds in a single lap, meaning Piquet’s advantage was now at 5 seconds. By the end of the 46th lap, just four away from the end, Senna made an herculean effort and closed the gap to just 3s6 seconds.

By the end of lap 47, Senna had gained one more second and Piquet’s advantage fell to 2s7. The Lotus driver was 0s1 faster on the following lap, and there were still two to go.

To the crowd’s utter incredulity, Senna’s next-to-last lap (the 49yh out of 50) was the quickest in the race: 1min26s796. And he did that without changing tires and after visiting a gravel trap. Now, Piquet was just 2s58 ahead of Senna, going into the final lap.

Piquet held on to his lead for the last 5.800 meters and crossed the finish line 1s806 ahead of Senna. Both Brazilians were so fast on the track that the race’s director missed it and didn’t wave the checkered flag to either of them.

Confused, Piquet didn’t slow down for a few more meters, while Ayrton Senna stopped at the first corner, since his car had already gone beyond its limit. Senna hitched a ride with Satoru Nkajima, his teammate, to get to the podium, at Monza.

The Brazilians shared the podium with Nigel Mansell, who finished in third place. Berger did better than Boutsen and took the fourth place. Johansson rounded out the top six, with his Ferrari.

Piquet remained at the top of the standings, with 63 points, while Senna went up to 49. Mansell was still in third, with 43. The following race would take place in Portugal.

What did he say after the race
“There are still five races left and all are very close, if you do the math at this moment in the championship. I’ll try to fight to the end.” 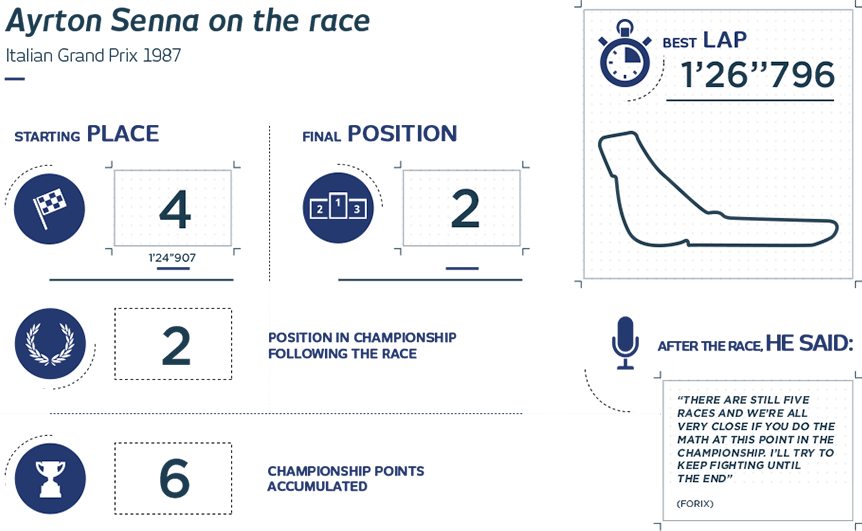 Senna holds the record for most pole positions in Italy: 13 in total