The charming Monte Carlo street circuit has always been a challenge for Formula 1 drivers. Up to then, in 37 years (as an F1 fixture, since the Grand Prix dated from before the championship was established), no Brazilian had ever won there. Ayrton Senna had come close in his very first year in the category (1984, when he was in second place, with strong chances of winning, until the race was suspended) and wanted very much to celebrate a victory there.

Ayrton began the 1987 season facing more challenges than he had at the end of the previous one. Before getting to Monte Carlo, he had retired from two out of three races (Brazil and Belgium). In San Marino, the only race he had completed, he finished in second. That year, Lotus had a new active suspension system, which could be a big help on the bumpy Monaco track. But the system had never been tested there, a fact that shook the team’s confidence.

During the qualifying rounds, he secured the second position on the starting grid. Nigel Mansell got the pole position, with a lap 0s672 faster than the Brazilian’s. The second row had Nelson Piquet’s Williams and Alain Prost’s McLaren. Michele Alboreto and Eddie Cheever made up the third row.

There was a controversy brewing in Monaco, since FISA (the Fédération Internationale du Sport Automobile) had allowed 26 cars to take part in the race, which could literally cause a traffic jam in the narrow streets of the principality. Usually, the six slowest cars in the qualifying sessions stayed out of the race, and only 20 cars completed, as it had happened the previous year, in Monaco. But, to appease sponsors, all 26 cars would be starting that day

Another curious fact was that the first row was a repeat of the previous race’s. Senna and Mansell had crashed in the first lap of the Belgian GP, which prevented both of them from winning at Spa. Senna talked to the press and said it wouldn’t be a problem.

“There’s always a risk, but Mansell has already said that what happened in Belgium is in the past. We’ve also talked to each other at the race director’s office. It’s always dangerous to start here, but I hope to finish the first lap, this time”.

On Sunday, the race started with Mansell keeping the lead. The Britton was 11 seconds ahead of Ayrton when, on lap 29, the turbocharger of his Honda engine gave out, forcing his Williams to retire.

Senna took the lead and dominated the race. He drove without incident for another 49 laps, even finding time to score the race’s quickest lap, with 1min27s685, before crossing
the finish line, 33 seconds ahead of Nelson Piquet, cementing the Brazilian one-two. Ferrari’s Michele Alboreto rounded out the podium.

For the first time, a Brazilian driver had won at Monaco – a feat good enough to place him among the greatest Brazilian sports figures of all time. It was one of his most enthusiastically celebrated victories.

The driver relaxed, after the checkered flag, by talking to his team’s mechanics through the Lotus’ radio. In a commendable gesture, he made sure to thank each one for preparing the car for the race.

When I noticed that I couldn’t keep up with Mansell, I decided to save my tires and brakes to have an easier time in the race’s second half. After Mansell retired, I started worrying about the backmarkers, and, especially, about not losing focus”, said the Brazilian after the race.

During the celebration, not even Prince Rainier of Monaco could escape the champagne shower that Ayrton Senna wanted to give the world. It was an overwhelming sense of joy for a moment which he would come to repeat five more times at the principality over the course of his career.

After celebrating with his team, Senna was invited by the Prince himself to attend the traditional Royal Family dinner, held after the races in Monte Carlo.

It was Senna’s fifth win in Formula One, and the first ever by a car using active suspension. Now, Prost had 18 points overall, followed by Senna with 15, Johansson with 13 and Piquet with 12. Mansell trailed in fifth with 10 points.

What did he say after the race
“I must say that it was easier to win today than it was to stay in third last year.” 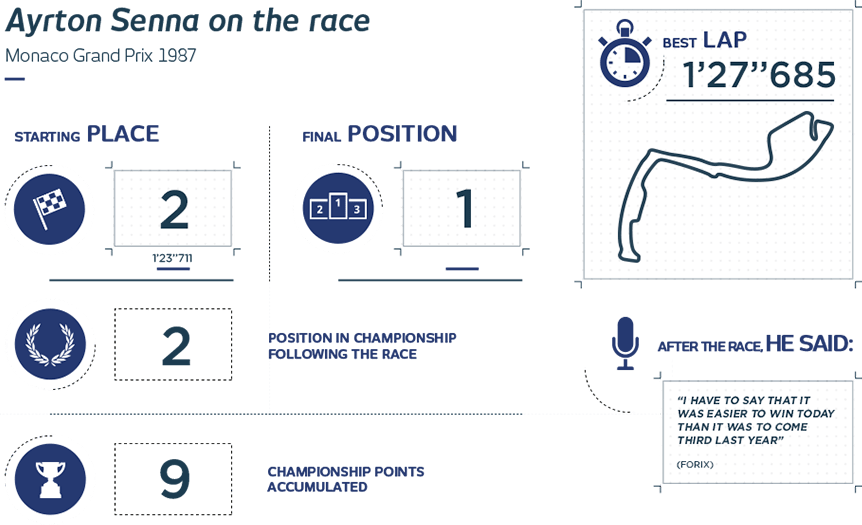