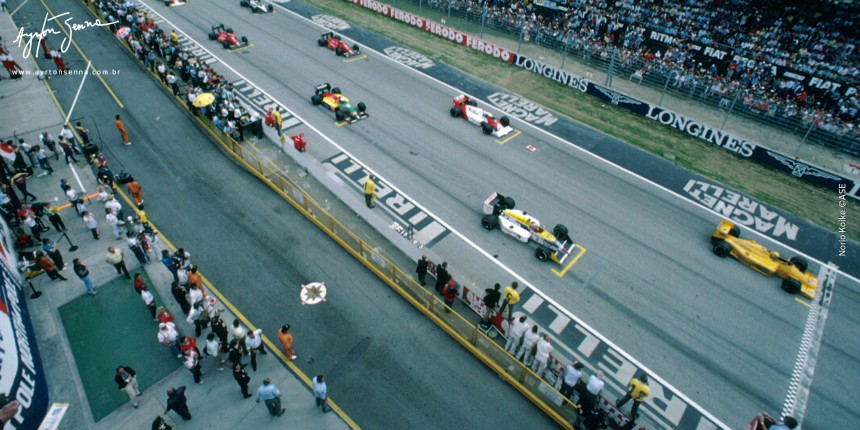 After a frustrating debut, when he wasn’t able to finish the Brazilian Grand Prix, Ayrton Senna arrived at Ímola – the championship’s second stop – willing to fight back immediately. And the best way to do that would be to secure the pole position in the qualifying sessions, when he and his Lotus would have better odds of surpassing Williams’ Nigel Mansell and Nelson Piquet – who ended up not racing, after a serious crash at the Tamburello turn.

The 1987 Imola Grand Prix was also Senna’s second race working alongside Honda’s Japanese staff, since the Renault engine used by Lotus during the previous season was replaced. Another big change was the car’s main color (now yellow, due to a new sponsor). But the Lotus 99-T’s main innovation was the development of an active suspension system, which would reach its pinnacle five years later, in F-1.

So, after Senna had the quickest lap on the May 2nd practice session (1m25s826, averaging 211.4 km/h), he scored a historic pole position: his first with a Honda engine and also the first one for a car using active suspension in F-1. The Brazilian was only a tenth of a second faster than Nigel Mansell, at Imola’s demanding track. It was his 16th F-1 pole position.

On Sunday, after testing the Lotus during warm ups, tank filled, Senna appeared confident in the performance of his car. He bet that he would be on the podium at the end of the race.

“If everything goes according to plan, we’ll leave them in the dust.”

When the race began, Senna led for one lap, but then felt that his Lotus was rocking on the high speed corners. Soon, he was no longer able to contain Nigel Mansell (Williams) who was on his tail and gave an excellent performance on the racetrack.

As it was impossible to oppose the Englishman, he managed to challenge the house driver, Michele Alboreto (Italian), who was racing with a Ferrari. In the end, his podium prediction came to fruition: Senna crossed the finish line in second place, behind Mansell and in front of Alboreto.

“I fought a great battle with Michele Alboreto, taking advantage of a very quick pit-stop. But then, my car started jolting – I think it’s a little moody. I stayed behind, and only managed to overtake him five laps later, leaving no chance for a comeback”, said the Brazilian after the race.

Senna scored his first six points in the 1987 season, which would turn out to be his best with Lotus in terms of his final standing in the championship (he would finish in 3rd). At that point, everything was still up in the air, with Mansell in the lead, with 10 points, one ahead of Prost, who won in Rio but didn’t finish the race at Ímola.

What did he say after the race
“I had to fight hard with Michele Alboreto, taking the lead after a very quick pit stop. But then the car began to jerk - I think it’s temperamental. I stayed behind, managing to pass him five laps later, with no chance of switching positions again.” 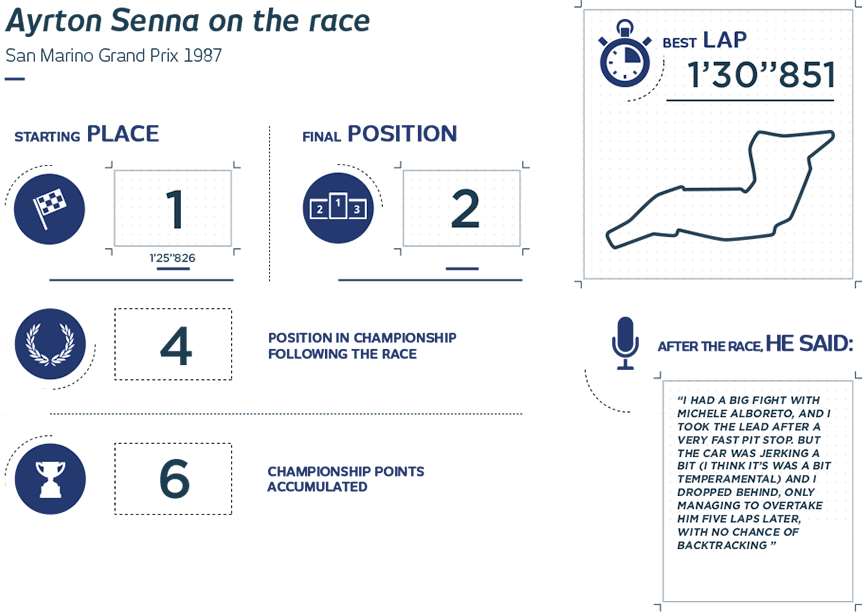