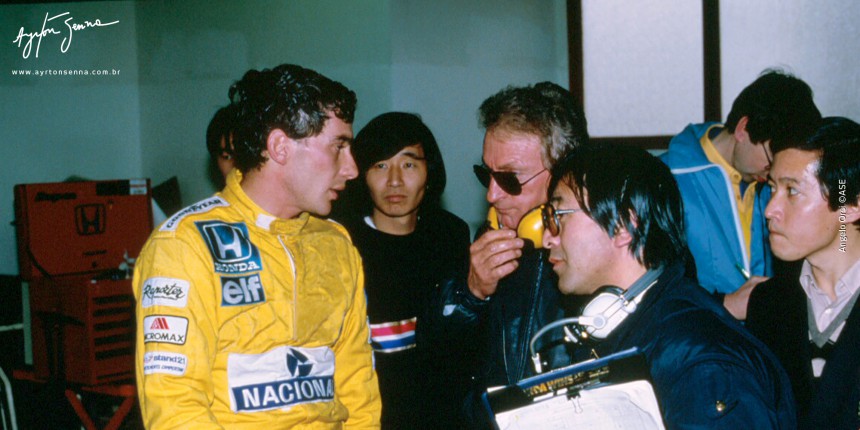 The main attraction at the Japanese Grand Prix was supposed to be the final showdown for the world title between Nigel Mansell and Nelson Piquet, both driving fast Williams cars. Mansell had to win there and in the final race, in Australia, and hope that Piquet would slip up in both races.

Fans were expecting a clash of the titans on the racetrack, but it didn’t happen because Mansell had an accident during the qualifying sessions at Suzuka and was taken to the hospital. The Britton suffered a serious rib injury, which meant he couldn’t race. Therefore, Piquet would begin the race as the year’s champion.

Despite Mansell’s accident, the first ever F1 race at Suzuka had several other highlights, and the greatest of them was Ayrton Senna. Lotus had trouble adjusting the car during the practice sessions, and the Brazilian had to settle for the seventh place on the starting grid, while Berger took the pole position with a time of 1min40s042. The Austrian would be accompanied by McLaren’s Alain Prost at the first row. Thierry Boutsen’s Benetton was in third place and Michele Alboreto’s Ferrari was in fourth. Piquet was in fifth, Teo Fabi would be starting in sixth and Senna was right behind him.

Ayrton’s start caught Piquet, Fabi and Alboreto off guard – all of them were overtaken by the Lotus even before the first corner. Berger kept the lead, with Prost in second and Boutsen in third. Midway through the first lap, Prost’s rear tire blew up, and Senna climbed to third place. Piquet was right behind him, in fourth.

Meanwhile, Berger took off in the lead, performing much better than the rest. In the 12th lap, Senna caught up with Boutsen and overtook the Benetton driver. Right after that, due to a problem with his Ford engine, the Belgian was overtaken by Nelson Piquet and by Swede Stefan Johansson, driving a McLaren, falling to fifth place. Berger was in the lead, followed by Senna and Piquet.

Since Berger was 12 seconds ahead of Senna and the Ferrari engine performed better on a fast track like Suzuka, the Brazilian had no way of shrinking the gap. Ayrton had to focus on getting away from Piquet, who was doing everything in his power to overtake him.

Johansson caught up with both Brazilians and decided to make an early pit-stop to come back strong and try to beat both drivers. The strategy proved to be successful, after all of them had changed their tires. When Berger mad his pit stop in the 25th lap, Ayrton actually led the race for a lap, and then made his stop at the same time as Piquet. Lotus acted faster, and Senna came back to the track in third place, with some breathing room, but Piquet’s Williams made up the difference in a single lap.

After holding Piquet back for 40 laps, Senna was able to rest a little easier when the Williams suffered an engine problem. Nelson was forced to retire five laps later due to an oil leak in his car’s rear-end.

Less than five laps to the end, Senna was still ten seconds behind Joahansson. The Lotus driver picked up the pace and was able to reduce the difference in two seconds per lap, until he passed the Swede at the start of the last lap – to the delight of the Japanese crowd that was being introduced to the man who would become their greatest idol in motor sports.

Berger crossed the finish line in first lace, 17s384 ahead of Senna, who completed the race just 0s310 before Johansson’s McLaren. Now, Senna had 57 points in the tournament, which meant he could become the championship’s runner-up in Adelaide, Australia, since Mansell would have to skip the season’s final race. The Britton had 61 points, while Piquet secured his third world title with 73 points.

Ferrari was finally back on the top of the podium after a dry spell of 37 races, which amounted to two years and three months without a victory. Their last triumph had taken place at the 1985 German GP, with Michele Alboreto. Berger’s win in Japan was his second in F1.

What did he say after the race
“Faced with the circumstances, it was a very hard race, but the end results were good.” 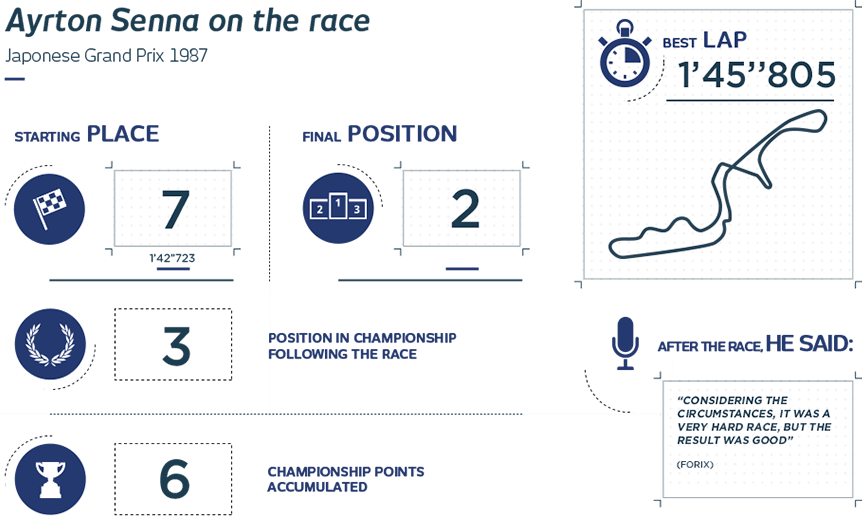