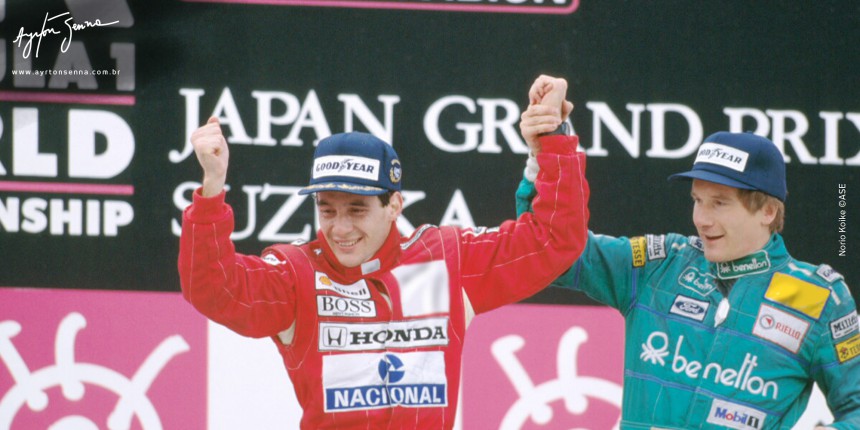 It isn’t hard to understand the respect the Japanese public has for Ayrton Senna. It was there that the driver gave some of his greatest performances, the 1988 Japanese Grand Prix being one of the best of them. It was the first title-battle between Senna and Prost, both equipped with their impressive McLarens and Honda V6 Turbo engines.

The British team’s superiority was such that McLaren’s 1988 roster is still considered the best ever in F1 – a true “dream team”. It was not by accident that they failed to win only one race that year (in Monza, when Senna was denied the victory after crashing with a backmarker at the chicane).

Before the race at Suzuka, Ayrton had won seven times in the year, while Prost had six victories. The math was simple: if Ayrton won, he would be champion. If that didn’t happen, the championship would be settled a week later, at the season’s last race, in Adelaide, Australia.

Obviously, Senna wanted to win the title as soon as possible, and the free practice sessions showed he was racing to win. In the first one, he was 1s6 faster than Prost.

During the qualifying sessions, Senna established a new F1 record: it was his 12th pole position in a single season, a feat that no other driver in history had achieved at that time. The difference wasn’t as significant as in the free practice, which meant that Prost would give Senna a run for his money, in Suzuka. He was only three tenths of a second slower that the Brazilian.

The grid’s first row reflected the season overall: Senna in first and Prost in second. When the green light went on, the Brazilian was in for a shock: his car didn’t move, and the driver had to raise his arms to signal a problem – all the while hoping not to be touched by the more than 20 cars behind him.

Besides not being hit by any of the drivers, Senna was lucky in another way: since the straight was in a downward slope, he managed to push start his McLaren and get into the race, albeit several places behind, falling to a discouraging 16th place. Prost stepped on the gas, took the lead and all seemed lost for the Brazilian fans. But was it?

When the engine went back to work, Senna was so determined to recover the lost time that he overtook six cars in the first lap and set out in pursuit of Alain Prost, who was in the lead and already looking like a champion.

In the second lap, Senna passed Ricardo Patrese and Alessandro Nannini, climbing to sixth place. In the third, he passed Thierry Boutsen and, at the fourth lap’s chicane brake-point, he left Michele Alboreto behind. Senna showed he was alive in the race and in the championship, even 12 seconds behind Alain Prost – a significant gap for two world-class drivers racing for the same team.

At the end of the tenth lap, the Brazilian passed Gerhard Berger’s Ferrari and took the third place. Surprisingly, only March’s Ivan Capelli stood between him and Prost. Ayrton’s problem was that the Italian was more than ten seconds in front of him, fighting with Prost for the lead.

Senna was trying to get closer as he began to worry about the raindrops he saw in his visor. Prost and Capelli stumbled and lost a few precious seconds when overtaking backmarkers. Ayrton drove with surgical precision, reducing the gap with each lap, reaching the leaders in the 19th go-around. In the following lap, he left Capelli behind and became a fixture in Prost’s rearview mirror.

The rain finally stopped in Suzuka – it seemed it only showed up to make the duel  between F1’s greatest rivals possible. Now, they were on equal footing, since Senna had lost his well-known advantage of racing on a wet track.

Senna chased Prost for several laps. The McLaren drivers were in a particular race, apart from the others. On the 28th of 51 laps, the impossible happened. Senna was on Prost’s heels. Ayrton prepared his attack right before the pit-lane straight, and performed his 15th and most spectacular pass of the race.

The Frenchman spent the rest of the race trying to catch him, but Senna never gave him a chance, and managed to widen the gap between them: Prost finished the race 13 seconds behind the new world champion.

Senna’s race at the Japanese Grand Prix, aside from being one of the most brilliant in his career, is also considered to be one of the most spectacular in Formula 1 history.

It earned him title he thought was lost at the start of the race. More than a timeless victory for the new world champion, it was a work of art – like something out of a Hollywood movie, with a happy ending for Senna.

What did he say after the race
“I told myself that it was all over, but began to find my rhythm again and race faster and faster”. 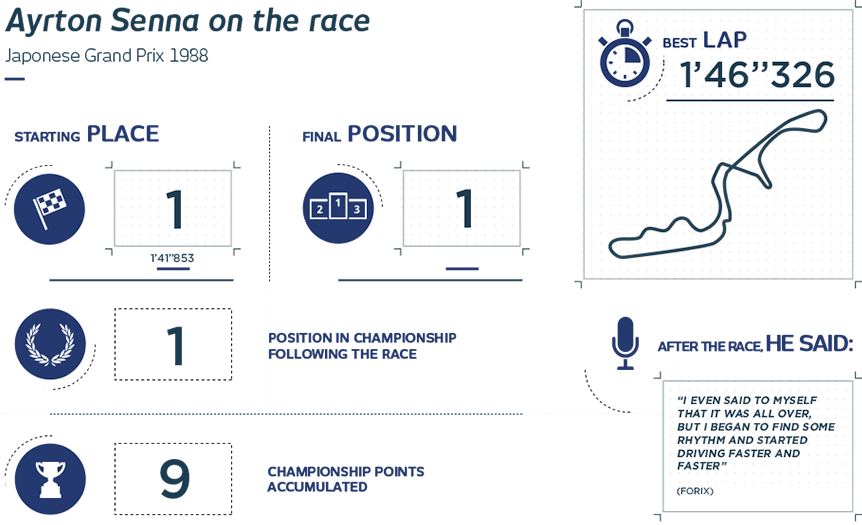