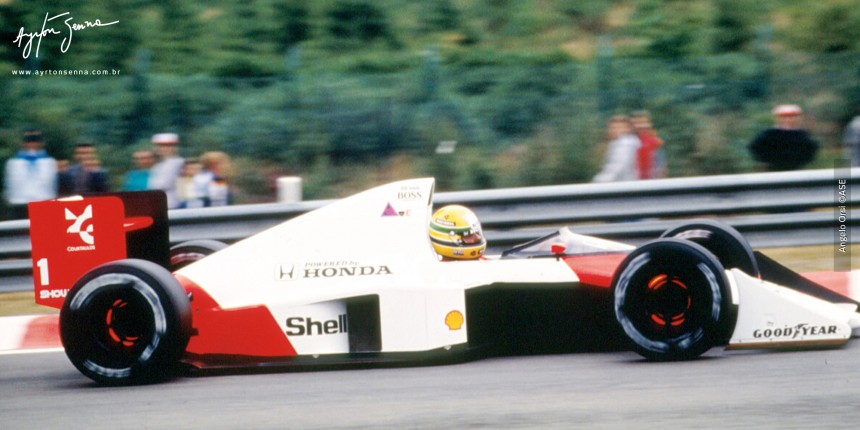 Ayrton Senna began the 1989 season driving the car number 1, always reserved for the champion of the previous year. He was one of the favorites to the title, but he knew that Alain Prost would not give up easily.

It would be a season of highs and lows. That became clear at the first race, in Jacarepaguá. Senna scored the pole position more than a second ahead of Williams’ Ricardo Patrese, with whom he shared the first row. But the race didn’t start well for the Brazilian: him, the Italian and Gehard Berger tried to jump ahead in the first corner and, as Ayrton himself later admitted, “We had three drivers trying to turn a corner made for one car at a time”. As a result, Senna lost his McLaren’s nose, had to make a long pit-stop and finished the Grand Prix in 11th place.

Ayrton completely dominated the three following races. He had the pole position and won in San Marino, Monaco and Mexico City. These contests made clear that Senna’s main rival that season was going to be Alain Prost, just like in the previous year, 1988, when the Brazilian won his first title.

During the season’s fifth race, McLaren started experiencing technical issues. Senna led for most of the Phoenix Grand Prix, in the USA, but had to retire with electronic problems. Prost took advantage of that and won the race, passing Senna in the overall standings: 29 points versus 27.

The four following races had four different winners. The difference between Prost and Senna stayed pretty much the same. In Hungary, Mansell won, with his Williams. Senna won in Belgium, with Prost right behind him, at the challenging Spa-Francorchamps track. In Italy, Ayrton’s engine gave out again, to the delight of the tifosi (Ferrari supporters), who had just learned that the Frenchman would be joining their team for the 1990 season. The audience was clearly rooting for the Frenchman who, after all, would be driving for the Maranello scuderia the following year. And, in Portugal, Berger finished in first.

Even with car issues in some Grand Prix races, Senna reached the second to last phase, in Suzuka, within reach of the title. He had to win and root against Prost. And, in the blink of an eye, when both collided at the chicane, a second championship title started to seem possible, especially after Prost retired. The Frenchman clearly planned for a crash that would take both McLarens out of the race, but he didn’t count on Senna going back to the track. That made for an exciting race, since the Brazilian had to make a pit-stop, change the nose (a much slower process in the ‘80s than it is now) and come back to fight for the lead. And he made it, overtaking Benetton’s Alessandro Nanini and crossing the finish line in first place.

Senna won the Japanese Grand Prix, but was disqualified by the commissioners in a controversial ruling orchestrated by his enemy, Jean Marie Balestre, the FSA president, for an irregular maneuver when returning to the racetrack. Even though he won six races, while Prost won only 4 in the season, the second championship title would have to wait a little bit longer.