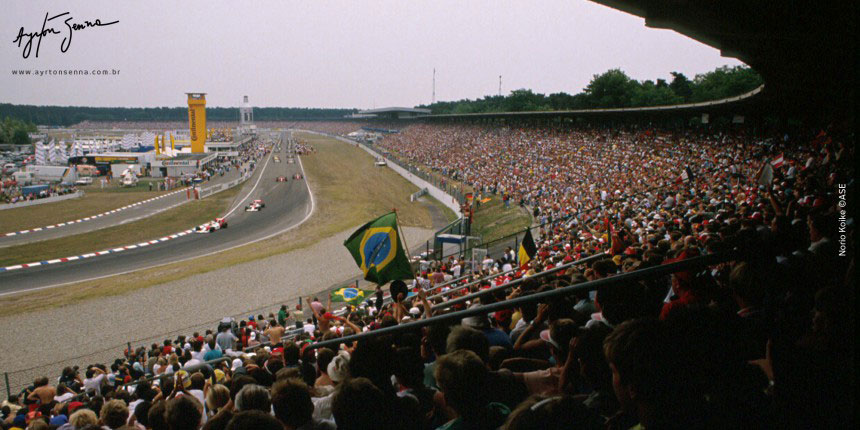 The result on Saturday made Senna even more excited for the race to start. The Brazilian had won at Hockenheim in the previous year – a crucial triumph in the path towards his first world title at the end of the 1988 season.

Using Honda’s V10 engine, McLaren presumed its drivers would only be fighting amongst themselves in the German track’s long straights. And, on Sunday, that’s exactly what happened, but not before Senna suffered a scare. Due to a  radiator issue, the Brazilian had to use his spare car.

At the green light, Berger had a spectacular start and jumped from fourth place to first. After the first corner, Senna moved into the Ferrari’s slipstream, maneuvered right and took the lead back. Alain Prost waited until the second long straight and also overtook Berger. The McLarens were perfogming much better than the Ferraris.

The race in Hockenheim was full of crashes. On the fourth lap, Thierry Boutsen collided with Italian Emanuele Pirro’s Benetton, who started in ninth place and had been the first nine lap’s highlight. The Belgian was forced to retire, while Pirro remained on the track.

On the 14th lap, it was Berger’s time to make the crash-list. The Ferrari driver missed the brake-point at the chicane’s entrance, went over the gravel trap and lost his car’s nose. That meant Mansell now had the third position.

Completely dominant, both McLarens were close to each other. unable to take the lead from Senna, Prost decided to change tires on lap 16. The team from Woking had a bad pit-stop, which lasted 18 seconds, and the Frenchman lost precious time in his fight against the Brazilian.

Prost returned in fourth place, but Mansell soon stopped to change tires on lap 17. And, just like Prost, he also took a while to return: his front left wheel wasn’t properly attached and the mechanics were forced to redo all the work.

In the lap following Mansell’s pit-stop, Senna also went into the boxes. Once again, the mechanics made a mistake, having a hard time with the rear right tire of the #1 car. The Brazilian lost all the advantage he  had built over Prost, since he spent 23 seconds in the pit-lane. Since Pirro made his stop in the same lap as the Brazilian, Prost took the lead.

On lap 26, Pirro had only theMcLarens and Mansell ahead of him, but he was forced to retire after crashing into the Styrofoam barrier due to a braking mistake at the third chicane. That meant Riccardo Patrese was now in fourth place.

After that, the race’s spotlight was exclusively on the duel between Senna and Prost. The Frenchman was four seconds ahead of the Brazilian, who started closing the gap it by the tenths of a second up until the final laps.

On the 43rd lap, two away from the finish, when Prost was less than a second ahead of Senna, the Brazilian hit the gas and overtook him. The Frenchman slowed down, since he was having gearbox problms and crossed the finish line 18 seconds behind Senna. Mansell’s Ferrari rounded out the top-three.

After the podium, when he received full victory honors, with both pole position and the fastest lap, he didn’t seem as happy as he had the night before. Senna talks about the fact that Prost’s lead on the standings had shrunk from 20 t0 17 points (53 to 36).

“This result doesn’t really change a lot. I’m still fighting to win the title and there’s still a long way to go before it’s up for grabs. It will not be easy, but I’m used to hardships, since I’ve had to fight tooth and nail for everything that I have, but always with a lot of faith, like I did in this race. When the car was put back on the ground, the mechanic in charge of the rear right wheel wasn’t sure that it was tight enough, and the car had to be risen again so that they could repeat the operation. I thought that the race was pretty much finished for me, but then I saw that Alain wasn’t that far away and tried to keep cool in order to avoid mistakes and get close to him. I waited until the backmarkers allowed me to gain ground, but they ended up helping out Alain, since he overtook them in the straights and I ended up catching a few of them on the corners. The race was wide open and I got really close to him in the last few laps. I just needed a tiny chance to try to overtake him – and that’s when Alain started having car troubles. There’s no “if” in Formula One. I can’t say if I would have overtaken him otherwise, but the result is what counts.”

It was Senna’s fourth win that season, and the next race was scheduled to Hungaroring, two weeks later.

What did he say after the race
“A little bird told me I would win. I just hope it comes to chirp in my ear again.”