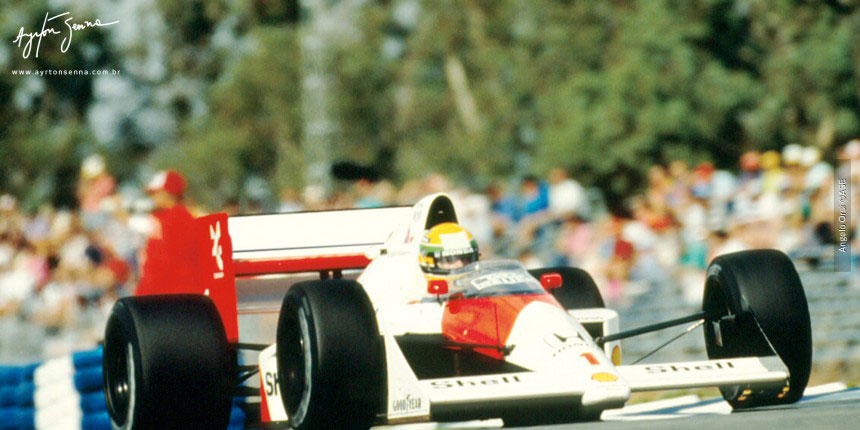 Following the unlikely accident with Nigel Mansell in Portugal, Ayrton Senna wanted to go back to winning in Spain, to close the 24-point gap that separated him from Prost. The only way was to win the three remaining races and earn the 27 points still in contention. He was going to give it his all.

There was no better place for that than the track where Ayrton had already made history, Jerez de la Frontera. In 1986, Senna beat Mansell for just 14 thousands of a second. In 1989, Senna made it all look easy. He had already won the pole position in front of Gerhard Berger, Alain Prost and Mansell, with the best time in both days of qualifying sessions. It was Ayrton’s 40th pole position in Formula One, more than a full second ahead of his main rival in the fight for the title, Alain Prost.

During the race, he kept the lead from start to finish – the whole 72 laps – setting the fastest lap as well. Jerez was all about the start. The grid positions were maintained on the podium. Senna was the winner, with Berger in second and Prost in third, which seemed very likely due to the amount of tight turns and the fact that overtaking was extremely difficult. But Senna never cared for what was “likely” and made that clear by finishing the race 27 seconds ahead of Berger and 53 seconds ahead of Prost. It was Senna’s 20th victory in F1 and his sixth in the 1989 season.

“Someone gave me this victory. Someone stronger than all of us.”, said Senna.

“Did you expect to win so easily?”, asked an interviewer from FIA at an official post race press conference. Remembering the staircase which he had climbed to get to the press room, he answered back:

“Easy? It was hard enough just to get up here!”

Like Ayrton said, it wasn’t easy at all. Otherwise he wouldn’t climb on the podium with a limp. He had severe back and sciatic nerve pain, due to the extreme physical effort. Talking about the race, Senna explained his brakes were a little “loose” and that the pain got much worse after the 30th lap. The only thing that kept him in the race was his trademark resolve.

After the race, he went into de McLaren truck and sat down on the floor for a little while, to rest. Ayrton left the track by helicopter, and three days later he was already in Íìmola, to test his McLaren with the following year in mind.

It was a beautiful farewell to the European season from Ayrton Senna. Now, the 1989 championship would be decided in Japan. It came down to Senna versus Prost. To win the title, Senna would still have to win the next two races (Japan and Australia). All Prost had to do was play it safe and wait for the trophy. It can be said he went a little beyond that, watching Senna’s constant evolution at the end of the season.

What did he say after the race
“Easy? It was hard enough just to get up here!” (on his victory and a joke about the staircase leading to the press room on the Spanish circuit) 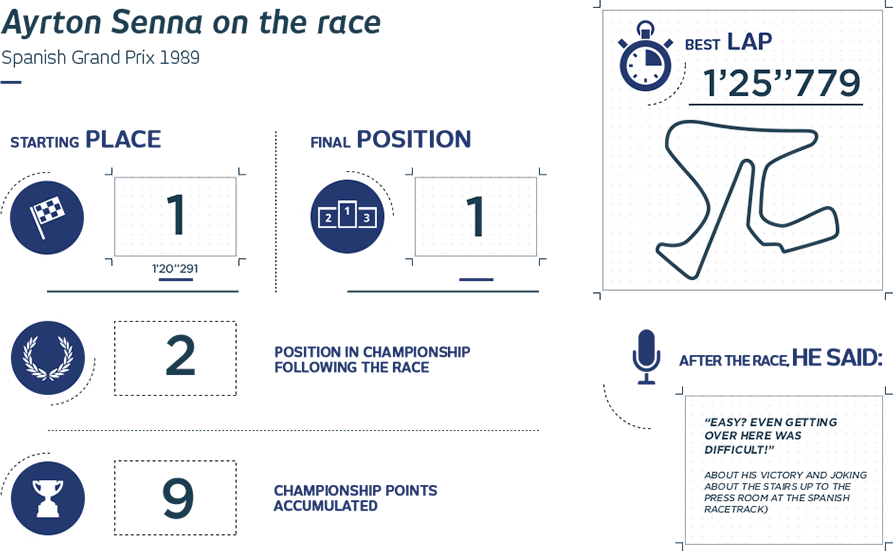