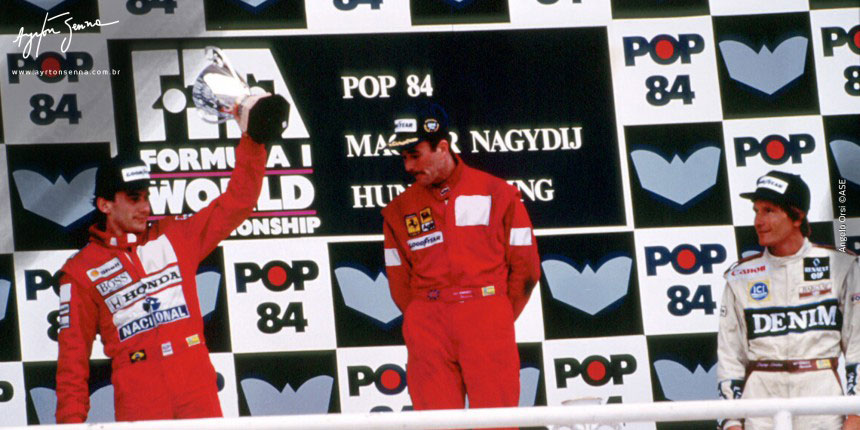 Despite dominating the 1989 season with relative ease, McLaren faced an array of problems concerning their set up for Hungaroring. The twisting circuit increased the chances for cars with weaker engines and for the first time in 13 months the pole position wasn’t in the hands of either Ayrton Senna or Alain Prost. That had happened for the last time in July 1989, at the British GP, when Gerhard Berger posted the quickest lap of the qualifying session with his Ferrari.

In Hungary, it was Ricardo Patrese’s turn, whose Williams took the pole position away from McLaren. Senna was in second place, just 0s313 seconds behind the Italian driver, who posted a time of 1min19s726.

The second row featured the qualifying session’s biggest surprise: Dallari’s Italian driver Alex Caffi, who had the best training session of his career at the Hungarian Grand Prix. Thierry Boutsen’s Williams would be starting next to Caffi, in fourth place. Prost was relegated to the third row in fifth place. Berger was in sixth on the starting grid, with his Ferrari.

Prost was leading the standings, with 53 points. Senna had 36, while Patrese and Nigel Mansell were tied with 25 each. The “Lion”, who had scored his sole win that year in Brazil, would turn out to be one of the main characters in the race. But, for now, he was starting in 12th place, with his Ferrari.

The Hungarian circuit brought nothing but good memories for the Brazilian drivers. Nelson Piquet and Ayrton Senna had scored two one-twos there, in 1986 and 1987, and Ayrton had won with McLaren in 1988.

At the start, Patrese and Senna kept the top two spots. Caffi was able to hold on to third place during the opening lap, but his Dallara’s performance kept getting worse and worse, and the Italian ended up being overtaken by the whole pack of cars that used Goodyear tires, which were more durable than Dallar’s Pirellis.

After the 10 first laps, Patrese was in the lead. Senna was in second and Berger had climbed from sixth to third place after overtaking Prost and Boutsen at the start, and Caffi a little later. McLaren’s Frenchman was still in fourth, and Caffi did his best to keep the fifth position.  Boutsen was in a modest sixth place. Alessandro Nannini was in seventh and Mansell had made his way to eighth.

Since Nannini had problems and as forced to make a pit-stop, Mansell caught up with Boutsen and took the sixth place before the 20th lap was over. With the race’s fastest car at the moment, the Briton easily overtook Caffi, claiming the fifth position.

Upfront, Senna wouldn’t Patrese get away, which meant Berger and Prost were closing in on the Brazilian to fight for the second place. The first four drivers formed a line. But since Mansell was gaining 2 seconds per lap, Prost’s 13-second advantage would soon disappear, and the Briton would be fighting it out with the leaders.

After 28 laps, Berger was the first in the front pack to change his tires, and was overtaken by Mansell, who was now in fourth. Patrese was still able to hold back Senna and Prost, allowing the Briton to catch up to Prost in the 38th lap.

In the 41st lap, Mansell boldly overtook the Frenchman, growing larger on Senna’s rearview mirror. The Lion was putting up a show at Hungaroring, but still had to deal with the Brazilian who wouldn’t give up his position without a fight.

At the start of the 53rd lap, when Mansell looked ready to strike and overtake Senna, the Brazilian was able to catch Patrese’s slipstream and beautifully overtake the Italian, who wasn’t even able to defend himself at the end of the main straight.

Unfortunately, for the Brazilian, the Lion also took advantage of the Italian’s mistake and also overtook the Williams driver a couple corners later. At the end of the same lap, Patrese made a pit-stop and his team noticed a hole in his car’s radiator, which explained why his car was losing performance.

Senna led the race for five laps. Soon after, in the 58th lap, he found himself tangled up with backmarker Stefan Johansson, whose Onyx was too slow on the track. To avoid crashing into the Swede, Senna was forced to brake, and Mansell easily overtook both of them, taking the lead and keeping it until the end, brilliantly going from 12th to 1st place.

Meanwhile, Berger left the race with gearbox problems in, leaving the fight for third place between Prost and Boutsen. Due to a slow pit-stop, Prost lost the place on the podium to the Belgian. Arrows’ American driver Edie Cheever, who had started in 16th place and decided to not make a single pit-stop, finished in fifth. Nelson Piquet, who had started in 17th place, finished in sixth.

With a second-place finish, Senna reached 42 points in the championship, getting closer to Prost, who still led with 56. Mansell, after one of the greatest races in his career, jumped to third inthe standings, with 34 points.

The following race would take place at Spa-Francorchamps, in Belgium. two weeks later.

What did he say after the race
“I didn't have to carry the car, but I had to push it a lot.” 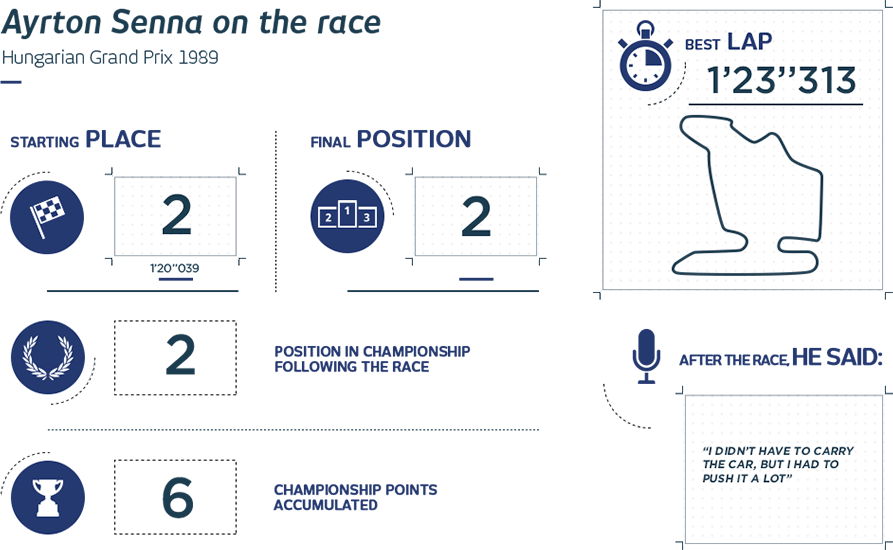