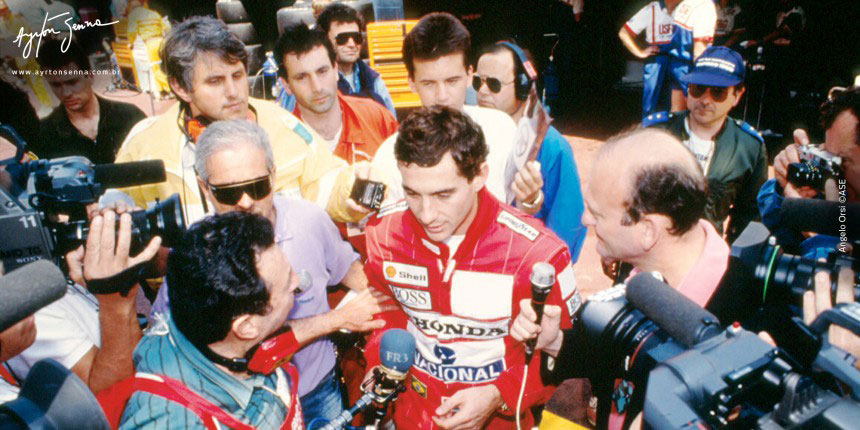 Fifteen days after Ayrton Senna’s win at Imola, his first in the season, the Brazilian returned to the Monte Carlo circuit, where, by his own admission, he’d driven poorly the previous year, crashing into the guardrail while heading for an easy win, one minute ahead of Prost – another reason for wanting to win and making peace with the streets of Monte Carlo.

Except for the mistake in the 1988 race, Monaco brought happy memories to Ayrton. After all, it was on the Principality’s streets that he first made an impression in the F1 world, by finishing second in his debut, in 1984, driving a Toleman. in 1987, Senna scored the first Brazilian win at the track (he’s still the only Brazilian driver to ever have won there).

On the other hand, his biggest rival that season – and McLaren teammate – also had a great track record at Monaco. Alain Prost had won there in 1984, 1985, 1986 and 1988. “It won’t be easy to race against a driver who’s won in Monaco four times. besides, Ferrari’s electronic gearbox may give [Nigel] Mansell an edge since the track demands a lot of shifting”, said Senna in his official statement to the press before the race.

Ferrari, a likely McLaren rival that weekend, would be a driver short since Gerhard Berger had crashed at the Tamburello corner, in the previous race, and his car caught fire. So, for the second time ever, the Italian team would be racing with just one car, Mansell’s. The unusual situation had happened only once, precisely in Monaco, after Gilles Villeneuve’s passing, in 1982. Berger, however, was already recovering and as expected to compete in the following race (he even attended the Monaco GP, providing color commentary for Austrian TV).

On Saturday, Senna got another spectacular pole position, with a time of 1min22s308, which meant a 1s148 lead on Prost – an incredible result considering they were driving the same car and Prost was a two-time champion (1985 and 1986). It was the Brazilian’s sixth pole position in a row (Spain, Japan and Austrailia in ’88 and Brazil and San Marino in ’89).

At the start, Derek Warwick’s car failed, and all the drivers were forced to go back to their original positions for a second green light. Senna started off well and settled into a five second lead on Prost. When the two approached the backmarkers, Senna passed them after exiting the tunnel, on the pit straight, and on the Casino downhill, coming out 52 seconds ahead of Prost. Prost wasn’t as resourceful as the Brazilian and had a hard time overtaking the slower cars, making it an easy race for his rival by lap 15.

Things got worse for him in the 32nd lap, when Andrea de Cesaris and Nelson Piquet crashed at the track’s slowest corner, Loews, slowing down the drivers right behind them. The Italian, despite being too optimistic when trying to overtake, got mad at Piquet and kept making gestures at the Brazilian, while Prost and Thierry Boutsen had to practically stop at the track, losing precious time. It looked like a regular car crash, only the parties involved were F1 drivers, including a three-time champion.

In a race without pit-stops, Prost had no chance to get close to Ayrton, who stretched his lead to 52 seconds.

Ayrton Senna left no room for distractions and drove his McLaren masterfully to his second win that year and in the Monaco Principality. Even after losing his second gear, in a track full of slower corners, Senna ruled from start to finish. It was the first of his five victories in a row at the Principality and the 16th in his career.

“Taking the issues I had into account, it was a great result”, said Ayrton, while surprising everyone by revealing he’d lost two gears. “At first, I lost my first gear. Five laps after, the second gear gave out. Then, I had to adapt my driving style to keep the same pace and keep Prost from noticing what had happened”, Senna told the press right after the race.

Senna and Prost were tied in the overall standings, with 18 points each, showing that the fight for the 1989 F1 title was going to be one of the most heated ever. Mansell, who retired from the race in the 30th lap, was third in the championship, with 9 points.

What did he say after the race
“I had trouble with the gearbox during the second half of the race, but I continued on strong so as not to give Alain Prost the slightest hint.” 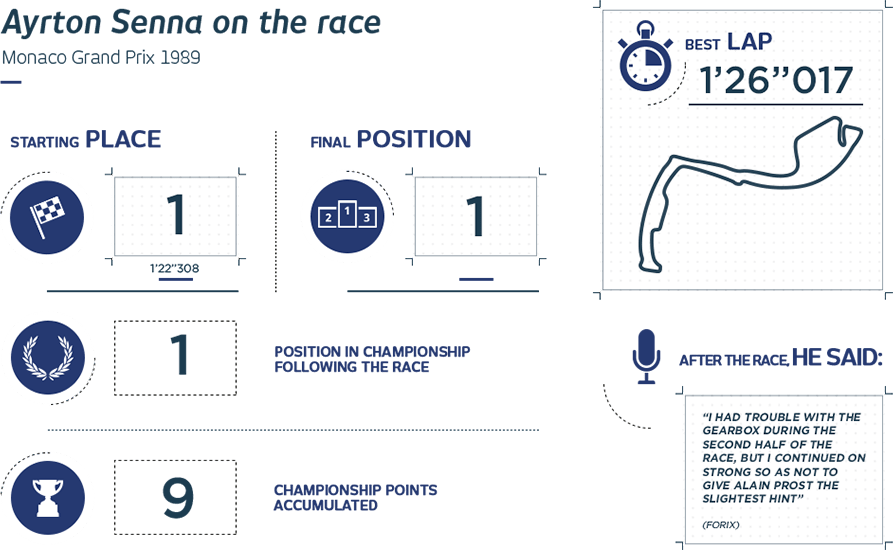