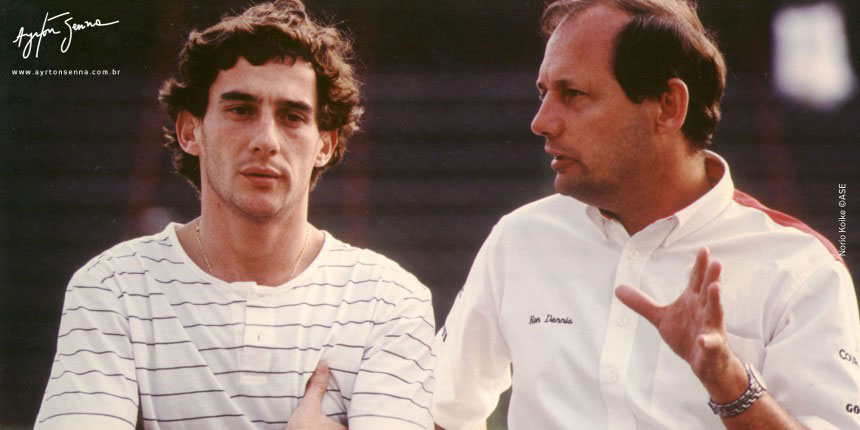 Ferrari’s performance was improving. The Italian team arrived in Portugal to put pressure on the McLaren duo, who were treating the championship as a domestic dispute. The Portuguese Grand Prix was one of the most controversial races in the 1989 F1 season, paving the way for the thrilling finale at Suzuka, on the following month, when Alain Prost rammed Ayrton Senna with his McLaren, mirroring what Nigel Mansell did in Portugal against the Brazilian driver.

Actually, it all had started at Monza, two weeks earlier. Senna was 11 points behind Prost in the standings, and was leading the Italian GP ten laps before the race’s end and more than 20 seconds ahead of Frenchman. But his McLaren’s Honda engine blew up, leaving Senna on foot. Prost won and climbed to 71 points in the tournament. Senna was stuck at 51.

Senna desperately needed to finish ahead of Prost in Portugal, but he didn’t count on the progress made by Nigel Mansell and Gerhard Berger. Ferrari’s performance was improving. The Italian team arrived in Portugal determined to put pressure on McLaren, which had been treating the championship as a domestic dispute.

Ayrton Senna led al the training sessions and secured the pole position with a time of 1min15s468, 0s591 quicker than Gerhard Berger, who was in second. Both the Austrian and Britton Nigel Mansell would be starting ahead of Alain Prost, who had to settle for starting in fourth.

During the race, the Ferraris demonstrated that they would, in fact, be a force to be reckoned with over the course of the season.

Berger started better and made the first corner in the lead. Senna was in second, Mansell kept the third place, followed by Prost.

The Brazilian ha trouble holding Mansell back, and, in the eighth lap, the “Lion” took the second place after drafting behind the Brazilian and passing him on the main straight.

At the start of the race, Berger had gained a lot of ground on Mansell, but the Austrian had trouble overtaking the backmarkers, and his teammate took the chance to gain the lead in the same section of the track where he had overtaken Senna, this time on lap 23.

Noticing Berger’s difficulty with backmarkers, Senna also caught up to the Austrian on lap 26. Soon after that, Prost made a pit-stop on lap 28 and it was clear he had a single goal: to finish the race within the points-scoring range.

Berger made his pit stop on lap 35 and Senna changed tires on lap 36. Ferrari’s stop was 7 seconds faster than McLaren’s, widening the gap between both drivers.

Mansell was the last of the leaders to stop, on lap 39. Ferrari’s boxes were located right after McLaren’s, and Mansell ended up going straight through the tire-changing area, perhaps thinking about his days at Williams. The Britton didn’t think twice about putting his car on reverse while inside the pit-lane, which goes against F1 rules.

His pit-stop took forever and the Britton came back to the track in third place. Senna felt emboldened by Mansell’s delay and went after Berger once again, fighting for the win. But the Britton started driving like a man possessed, hunting down the Brazilian, who had to defend himself and was left behind by the Austrian.

On lap 47, Mansell received his first black flag from the race authorities, meaning he was disqualified due to the illegal maneuver in the pit-lane. On lap 48, Mansell failed to take his Ferrari back to the garage and, on lap 49, still on the track, he ignored the penalty and continued ahead until crashing into Ayrton Senna’s McLaren, while trying an impossible overtaking maneuver. On lap 48, both drivers were forced to retire.

Berger won, Prost was second and Stefan Johansson (Sweden) was a podium surprise, with his Onix. Senna had the chance to reduce the gap between him and Prost in the standings, but ended up seeing the Frenchman take off in the lead. Now, he was 24 points behind, since his rival reached 76 while he stayed at 51. To become champion, Senna had to win the three final races: Spain, on the following week, Japan and Australia.