At Imola, there was a sea of banners saluting the Ferrari drivers Gerhard Berger and Nigel Mansell. The Britton had opened the season with a victory in Brazil, at Jacarepaguá, where Senna had an accident during the first lap. Even as a McLaren driver – Ferrari’s biggest rival at the time – the Brazilian had his share of applause from the stands at the Autodromo Enzo e Dino Ferrari.

A banner being waved insistently near the boxes was directed at Senna, and it read:: “Senna i tifosi de Napoli te espettano Ferrari 90″ [“Senna, Napoli’s fans are waiting for you at Ferrari in 1990”].

On the track, the Brazilian driver rode his McLaren towards the 31st pole position in his career, followed by Alain Prost, repeating a scene that had become common place in in the previous season. Ayrton’s quickest lap during the qualifying rounds, 1min26s010, was 0s225 faster than his rival’s. The second row had Nigel Mansell, in third, and Riccardo Patrese (Williams), in fourth. Berger was in fifth place, with Thierry Boutsen (Williams) rounding out the third row, in sixth.

Both McLarens started off well and kept the first two positions. But, on the third lap, Berger crashed on the Tamburello corner, and his Ferrari caught on fire, which caused officials to call for a restart.

The race was suspended for about one hour and Berger, despite the impressive crash, only burned his hands. Officials decided that the results obtained in the first few laps were going to be considered in the final tally, meaning that they were going to add up the times for each driver.

Upon restarting, Prost took the lead, but was passed by Senna before the first lap was over. The Brazilian’s maneuver on the Villeneuve corner is one of the most controversial events in the history of his rivalry with the Frenchman, who accused the Brazilian of breaking their pact of non-aggression in the first lap. To Senna, however the complaint was unfounded, since it was a restart, which meant they were free to fight for the lead.

At that moment, the relationship between the two McLaren drivers was irreparably soured. The Frenchman was pushing for the pact, but Senna refused, claiming he would not stand for a “decorative competition”. Patrese jumped to third place and Nanini, who had started in seventh, took the fourth place, while Mansell fell to fifth.

On the sixth lap, Mansell decided to turn on the pressure and overtook Nanini. The Ferrari driver, fueled by the crowd’s excitement, quickly caught up with Patrese and climbed to third place. Meanwhile, both McLaren kept a comfortable lead.

The race became even easier for the team from Woking when Patrese and Mansell were force to retire (on the 21st and the 23rd lap, respectively). The Renault engine of the Italian’s Williams broke down, while the Britton’s Ferrari suffered a gearbox failure. Brazilians Nelson Piquet (Lotus) and Mauricio Gugelmin (March) also retired in the following laps.

Senna had an uneventful race from then on. The Brazilian was more than 40 seconds ahead of Prost when he crossed the finish line. It was Senna’s first victory after winning his first world title. The Frenchman ended up spinning out on his own, when there were 12 laps left. Prost was lucky enough not to get stuck in the gravel trap, and was able to return to the race still in second place.

Italian Alessandro Nanini was one lap behind the leader and finished in third. Since both  Ferraris had retired, and Patrese was also out of the race, all the local crowd had to cheer for was the Benetton driver’s podium finish.

On the podium Senna celebrated a lot, while Porst kept a frown, and didn’t even wait for the Brazilian to pop the champagne. The rivalry between them would only increase during the rest of the season. The result put Prost at the top of the standings, with 12 points, trailed by Senna and Mansell, with 9 points each.

After the race, Senna remained in the McLaren trailer until the end of the day, but he was unable to escape the Italian fans. He had to sign the banner made for him as well as promise to sign with Ferrari in 1990.

What did he say after the race
“Alain Prost put pressure on me in the beginning, until I found my rhythm and opened a 6-second lead over him. After he spun out, the pressure was really over.” 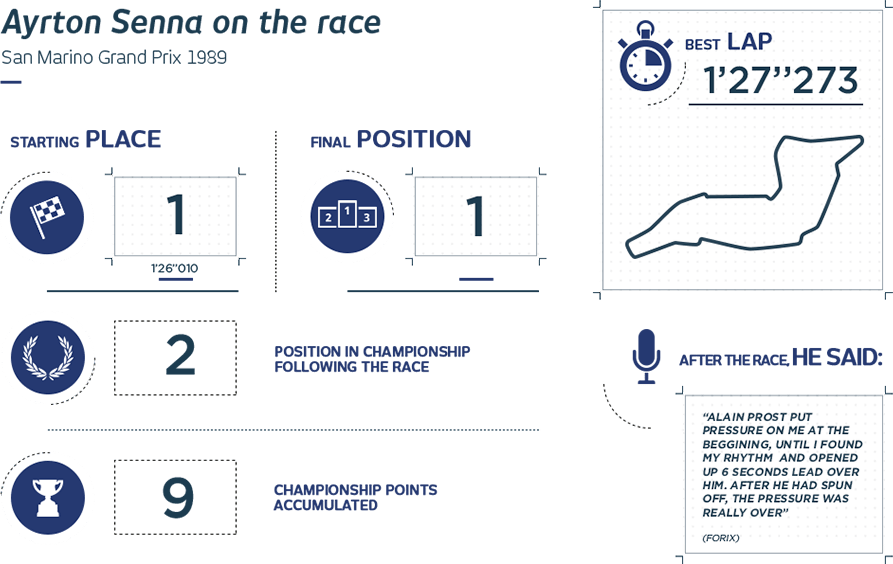