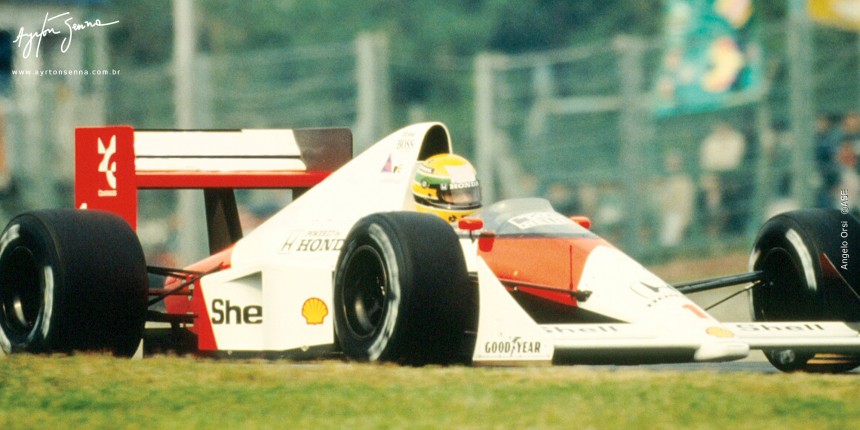 The final chapter in the fight for the championship title took place on the Suzuka circuit in Japan. Ayrton Senna got there with 60 “valid” points (only the best 11 results counted): he had won six times in the season. Prost had won only four races, but had 76 points. The Frenchman had a more consistent season with six 2nd place finishes, while Senna had retired from five races. That meant Senna needed to close a 16-point gap. He needed a win and was also hoping for mistakes on the part of his teammate.

Ayrton did his part in the qualifying sessions. He got the pole position with a time of 1min38sec04, almost two full seconds ahead of the Frenchman –an eternity in Formula 1 terms. At the start, Prost had more grip and made the first corner ahead of the pack, followed by Senna. For more than 40 laps, the distance between them was practically negligible. It was a race apart from the other drivers, as the whole season had been. Prost changed his tires 21 laps in. Senna took the lead for three laps. After the Brazilian’s pit-stop, the Frenchman regained his lead.

On the 47th lap, Senna tried to deliver a fatal blow at the chicane before the pit-lane entrance, throwing his McLaren into the inside lane, but Prost cut him off even before the first leg of the chicane was over. They ran into each other. Alain Prost went off the track. Ayrton Senna asked for the marshals’ help and returned to the track.

“It was the only place where I could overtake him. Someone who was not supposed to be there simply cut me off and caused the crash”, said Senna after the race, in an interview to the Folha de S. Paulo newspaper.

Even with his McLaren’s nose damaged from the shock, Ayrton kept fighting for the title. He made a pit-stop to change his car’s broken front wing. He left the pit-lane in second place, behind Alessandro Nanini. The Benetton driver was more than five seconds ahead of him. Three laps from the finish, he managed the overtaking that would keep him in contention for the championship.   Senna saw the checkered flag at the 53rd lap and got pretty emotional in his car. The title was going to be decided at the season’s last race.

Formula 1 authorities, however, punished the Brazilian, and he didn’t even step on the podium.

According to the 56th article of the 1989 F1 Disciplinary Code, if a car got stuck in the middle of the track, marshals could move it to a safer place. If the driver was able to make it work (like Senna did), he could go back to the race. The irregularity was in the fact that Senna “cut” the chicane. After the crash, Senna’s and Prost’s car ended up out of the track, and since the Brazilian didn’t come back at the exact point where he had left, he was disqualified. It was a controversial decision, obviously. After all, to keep from cutting the corner, he would have to drive in the wrong way. Besides, it was obvious that the “cutting” didn’t afford him any advantage, since the crash cost Senna a lot of time. From 1979 to 1989, 26 drivers had been disqualified – none of them for cutting corners or taking the wrong route.

That meant Alain Prost won the season’s title in his last year with McLaren. The season didn’t have to end there, but it did. In 1990, however, Senna would get even by winning the championship – in a way that would, in a manner of speaking,  make up for the injustice of the previous years’ punishment.

What did he say after the race
“The provisional results of this race neither reflect a true race nor the spirit of sportsmanship, nor the following of regulations. I would say it’s an embarrassment to the sport.” 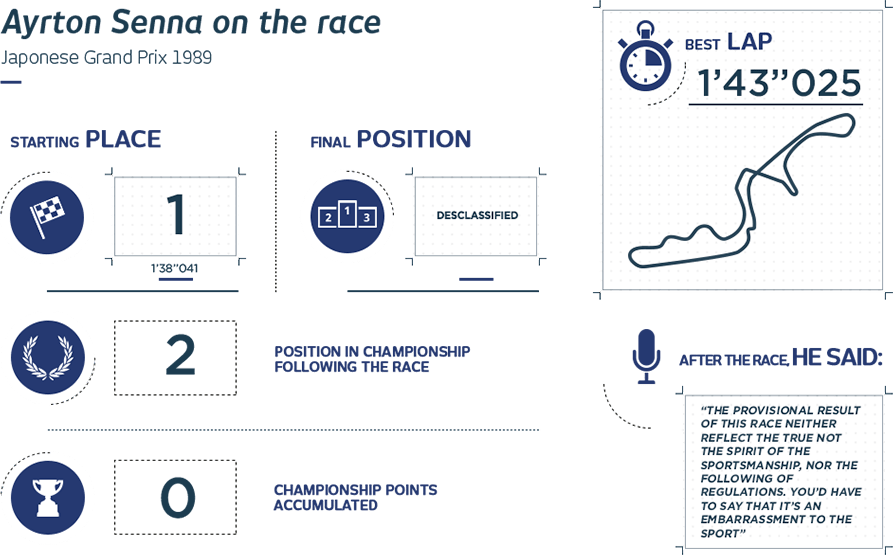