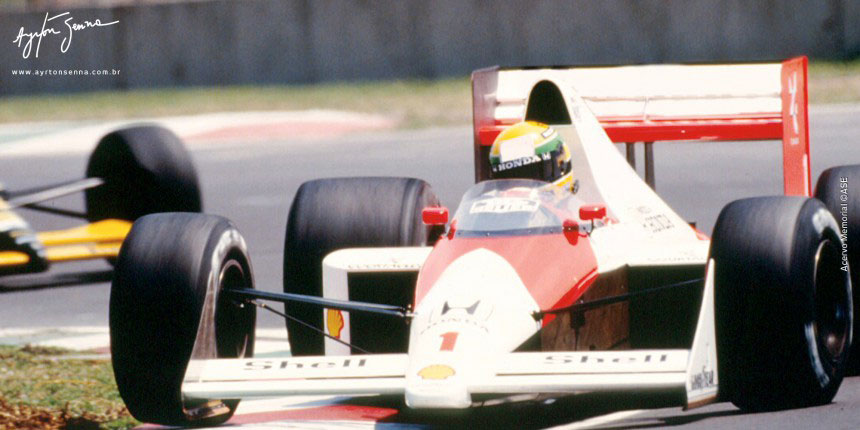 On May 28th, 1989, around two hours before the start of the Mexican Grand Prix, Emerson Fittipaldi won the Indy 500. Brazil had the chance to see two world champions making history on the same day, in North America. And that’s what happened.

Mexico City’s altitude – more than 7,000 ft. above sea level – could potentially even out car performances, something that would spice up this Grand Prix competition since the previous season and the start of the current one hadn’t been very promising for McLaren rivals. Despite Mansell’s win for Williams, at the championship’s first race, McLaren, the reigning champion, had scored one-twos in San Marino and Monaco, always with Senna in first and Prost in second.

In Mexico, the year’s fourth contest, the altitude factor had no influence over the first-row formation. Ayrton Senna won pole position once again – his seventh in a row and 33rd in his career, matching Jim Clark’s record at the time. He would start alongside his teammate, Prost, making for a new duel at the green light. The Brazilian scored 1min17s876, practical nine-tenths of a second faster than the Frenchman, on Saturday. Prost’s best lap in the qualifying sessions took 1min18s773.

The F1 paddock was abuzz with some great news: Gerhard Berger was back, after a crash at the Tamburello corner, in San Marino, that made him miss the Monaco GP. The second row had Ferrari’s Nigel Mansell and March’s Ivan Capelli. Patrese and Berger filled out the third row, the Williams starting ahead.

At the start, Senna maintained the lead, followed by Mansell’s and Berger’s Ferraris. Prost had a bad start and fell to fourth place. During the first lap, an incident involving Stefano Modena and Olivier Grouillard caused the race authorities to call for a second start, repeating the original grid positions. Obviously, Ayrton Senna didn’t like that at all. But Prost, who had fallen behind, was excited to be back in the first row.

After the restart, the Brazilian jumped ahead again, but this time the Frenchman held on to second place. Berger overtook Mansell, but the Britton returned the favor during the initial laps. The jockeying for positions remained in-house for the first ten laps: Senna vs. Prost, Mansell vs. Berger and Patrese vs. Boutsen – both Williams drivers. On lap 12, Senna quickened his pace, leaving Prost to deal with Mansell and pulling 5 seconds ahead.

On lap 16, Berger’s Ferrari started acting up and he had to make a pit-stop. For that race, Ayrton had an ace in the hole: he started with hard tires on the left side and soft tires on the right side. The bet paid off since he didn’t have to change tires while Prost was unable to spare his kit and had to change Goodyears midway through the race. Ayrton ended up only being pressured by his teammate at the start of the race.

On the 20th lap, Prost had to change his soft tires, which were already worn out. But a new tire selection mistake forced him to make another pit stop 15 laps later, leaving the path wide open for another Senna triumph. Since Mansell retired on the 43rd lap, due to gearbox problems, the Mexican Grand Prix podium had Ayrton Senna, Ricardo Patrese and Michelle Alboreto – a former Ferrari driver who took Tyrell to a top-three finish for the first time since 1983.

Out of the six drivers who scored points in the race, four were Italian. The fourth place went to Nannini, and sixth to Gabriele Tarquini. Prost finished in a modest fifth place and saw his teammate add seven points to his overall score. Now, the Brazilian had 27 points, against the Frenchman’s 20. Senna’s win made for a happy ending to the party started by Emerson Fittipaldi that Sunday.

In the end, he joked when asked what his secret for winning after a restart had been:

“It’s simple. I was prepared for three restarts.”

What did he say after the race
“It’s simple. I was prepared for two restarts.” (following a question about the key to his victory) 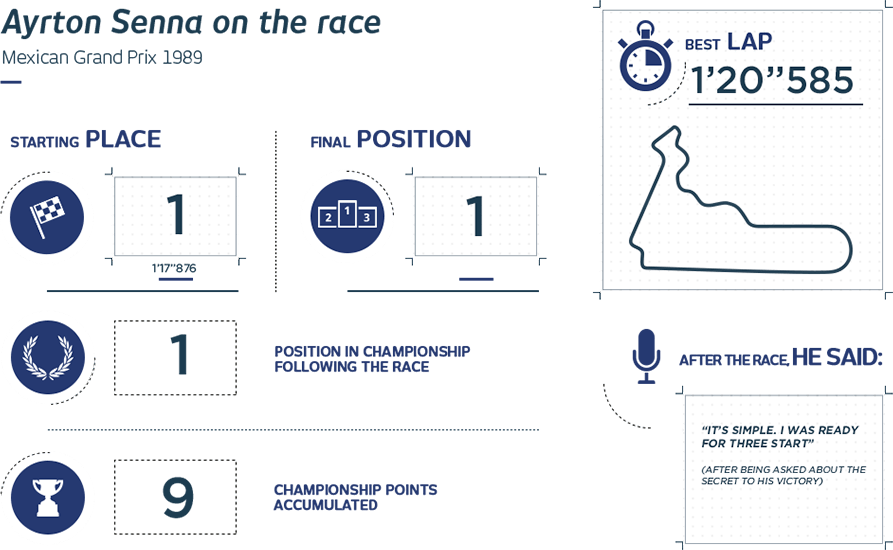