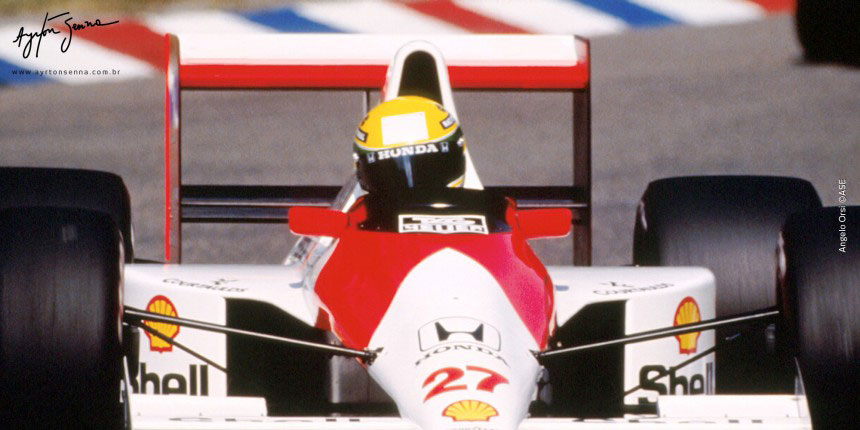 In the absence of a German driver in Formula 1, Germans cheered for Ayrton Senna. And that wasn’t the only reason: the driver had won the last two races at Hockenheim. That was why many Brazilian flags fluttered around the course. Counting the victories obtained by Nelson Piquet in 1986 and 1987, Brazilians had won in Germany for four years in a row – and Senna wanted to improve on those numbers.

All the affection was as incentive for Ayrton Senna. In the qualifying rounds, he was unbeatable and made the pole position, followed by his teammate Gerhard Berger, 0s236 slower. Behind them, Nigel Mansell’s and Alain Prost’s Ferraris. It was Ayrton’s 47th pole. He also broke the record for a pole position at Hockenheim, with 1min40s198, beating Keke Rosberg’s best lap in 1986, of 1min42s013.

Ferrari’s Alain Prost still led the championship. He was only two points ahead of Senna, but the Frenchman had won the last two GPs (England and France), casting doubt over McLaren’s ability to keep up throughout the season. Ayrton had finished in third both times, and needed a win to take back the lead.

“Undoubtedly, bad luck has been a constant in the last few races. But I can’t give up or think that the championship is already over. On the contrary, I’m confident my luck will change from now on”, said Senna to the press before the race.

At the start, Senna easily held on to his lead. Berger tried to jump ahead at the first corner, but gave up on attacking with his McLaren as soon as he saw there was no room to pass. After some confusion at the back of the grid, the start was considered valid and drivers finished the first lap by going through the pit lane on a yellow flag.

The first positions didn’t change, and teams moved the fight to the realm of pit-stop strategy, since most drivers had started with soft tires that wouldn’t make it to the end of the race. Nannini’s and Piquet’s Bennetons were among the cars that started with harder compounds, but Nelson was taken out of the race by the explosion of his Ford Motor.

Leading the race, Senna stopped during the 17th lap, after Berger had already made a pit-stop. A perfect change of tires, in 6s22, meant that Senna went back to track in second place, trailing only Nannini who – driving with hard tires – had a different strategy and wasn’t planning to stop.

Prost took a while in the pits, and Mansell took a stroll on the gravel trap before making his pit-stop, losing the lead to Nannini, the only driver among the top-six who didn’t stop. The “Lion” had to retire due of a problem with his suspension after leaving the track.

When he came back from the pits, Senna found himself right behind Nannini, who had started in ninth place but would complete the 45 laps without stopping. Taking his time, the Brazilian waited for the perfect time, in the 34th lap, to take the lead at the third chicane braking point.

He returned to the lead and achieved his third consecutive victory in Germany, giving his happy fans one more reason to celebrate by drinking lots of beer. The podium was rounded out by Nannini and Berger. Prost finished in fourth.

It was Senna’s 24th victory, matching Juan Manuel Fangio, a five-time F1 world champion. The Brazilian also took back the championship’s lead, four points ahead of Prost (48 to 44). It was his fourth consecutive victory in Germany, The following race was going to take place in Hungary, two weeks later.

After getting down from the podium, Ayrton Senna received bad news at McLaren’s motorhome. His loyal friend and business manager, Armando Botelho, had passed away while the driver was taking his victory lap in Hockenheim. 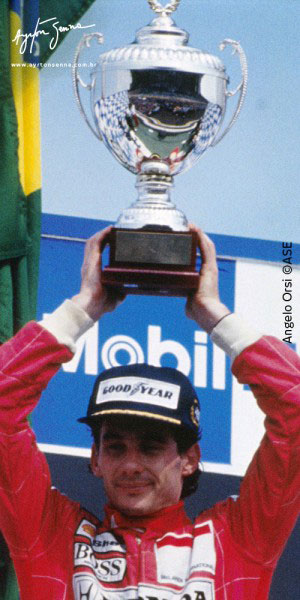 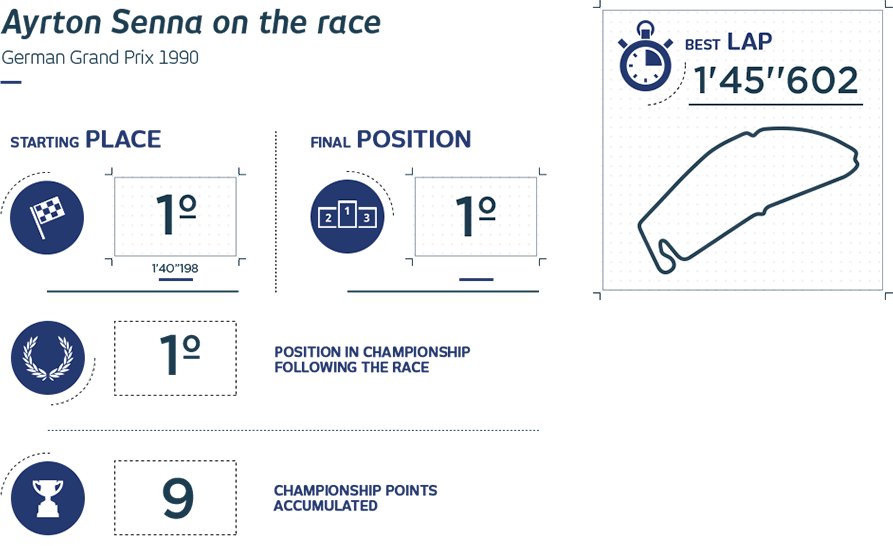