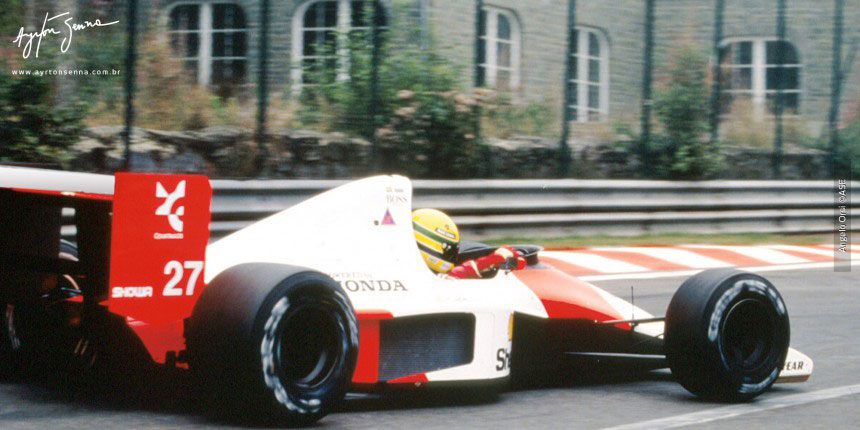 Ayrton Senna felt at home at the challenging circuit of Spa-Francorchamps. He had scored three wins there so far, the last two of them (1988 and 1990) starting from the pole position and leading from start to finish.

“Of course a victory would be news. I haven’t won here this year”

Leading the championship with 54 points, Ayrton Senna was 10 points ahead of Ferrari’s Alain Prost, in second place.

“The title is up for grabs, and I think Ferrari does better in slower tracks. McLaren fares a little better in faster tracks. But that’s just a theory, and it can change at any point in time. What matters is that we’re working hard to make our car more competitive in slower circuits, like Estoril, Jerez and Adelaide”, said Senna to reporters.

During qualifying, Ayrton Senna showed his superiority in the 6,940 meters track, nailing his 48th pole position a half-second faster than Gerhard Berger, with whom he’d share the front row. Prost would start on the second row, next to local driver Thierry Boutsen.

Still on Saturday, Senna announced he had signed with McLaren for another year, making it easier for him to fully concentrate in the pursuit of his second title, that season.

Senna had to start that Belgian Grand Prix three times before he was able to try and race for a win. Despite doing well in all of them, he saw the annulment of the first two starts due to accidents among drivers further back in the starting grid.

In the first start, Mansell and Piquet hit each other even before the first corner. In the second one, everything seemed to work out fine, but when drivers got to the second lap, Paolo Barilla’s Minardi crashed hard against the wall, prompting another red flag. This time, Senna it was really bad for Senna. In less than two laps, he was already more than three seconds ahead of the pack, and would have to hold on to his lead once again, in the new start.

The third and last start was the hardest one for the Brazilian. Berger put a lot of pressure on him. But Ayrton kept the lead after making a tight first corner at the hairpin.

Followed by his teammate, Senna had a shield between him and Prost. But the Frenchman didn’t want to let the Brazilian get away and took the second place right after completing the tenth lap, taking advantage of the Austrian’s worn-out tires.

On lap 19, Berger made a pit-stop. Meanwhile, Prost caught up with Senna. Boutsen was right behind, in third, but was forced to retire his Williams from the race due to transmission problems.

Senna and Prost changed tires in the same lap, and the Frenchman tried an unusual strategy to take the lead in the pit- boxes, but McLaren’s pit-stop was four seconds faster than Ferrari’s. Right after exiting, Senna had to defend his lead from Alessandro Nannini, who wouldn’t change his tires until the end of the race. The Italian charged twice, but Senna managed to warm-up his tires quickly and stayed ahead on lap 23.

Prost had a harder time on the following laps. The Frenchman was able to overtake the Italian on lap 27, and hadn’t given up running after Senna.

From them on, the race didn’t change a lot. Senna overtook the backmarkers more easily than Prost. The gap between them widened to ten seconds. But, at the end, trying to spare his car, Senna slowed his pace down and crossed the finish line 3s5 ahead of his rival.

By leading from start to finish, Ayrton Senna scored his fourth win at the Belgian circuit and the 25th victory in his career – the same as Scot Jim Clark and Austrian Niki Lauda . More importantly, he was able to expand his lead in the Drivers’ World Championship. He was now 13 points ahead of Prost, five races away from the end of the championship.

It was a Brazilian day in Belgium. With Senna’s victory, Piquet’s fifth place and Maurício Gulgemin’s sixth, the country had three drivers among the six first. It was only the third time in F1 history that three Brazilian drivers scored points in the same race. The first one had taken place in Germany, 1973, with Carlos Pace, Wilson and Emerson Fittipaldi. The second instance was in 1988, in England, with the same trio of 1990: Senna, Gugelmin and Piquet, in another Senna win.

As if that wasn’t enough, Rubens Barrichello had won the preliminary Formula Opel race, at Spa-Francorchamps, starting to make his name in the world of international Motor Sports.

After the race, Ayrton Senna talked to reporters about having to start three times:

“Once is more than enough, in terms of stress. When the second red flag came up, I felt like stepping out of the car and not starting again”, joked Senna.

The Following Grand Prix was scheduled to Monza, two weeks later, where the challenge would be even greater: he would be racing in Ferrari’s turf.

What did he say after the race
“It was a tough race, with greater wear on the transmission because of the three restarts.” 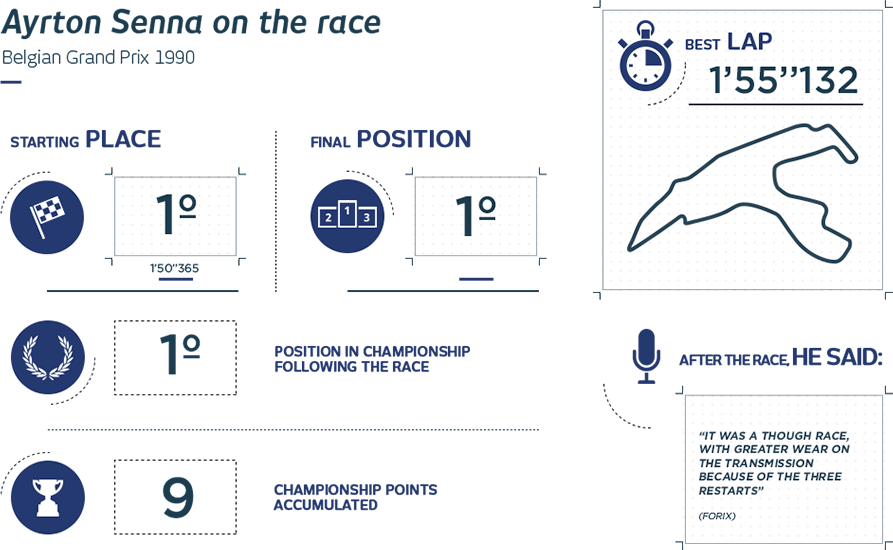