There was a rumor circulating behind the scenes, in Monza, that Ayrton Senna was in negotiations with Ferrari to replace Nigel Mansell the following . The only sure thing, however, was that the forthcoming duel between Ferrari and McLaren was going to be epic. There was no favorite to win.

In the qualifying sessions, the teams alternated in the first two rows: Ayrton Senna did the pole position, next to Alain Prost. Berger and Mansell started in the second row. After the start, Ayrton Senna was quicker and walked away with another “grand chelem”, by scoring the pole-position, the fastest lap and the victory – holding the first position from start to finish.

Despite a heated dispute, the first four cars finished the race in the same order they started it, with Prost in second place, Berger in third and Mansell in fourth.

At the start, McLaren’s Austrian driver overtook the Frenchman, while the Brazilian held on to the lead. Berger tried to catch up to Senna, but Berger’s aggressive style, with sudden brakings and constant use of the chicanes, took a toll on his McLaren’s performance. Senna, meanwhile, opted for a smoother pace and was faster when exiting corners.

Prost took advantage of the Austrian’s dwindling performance and passed him on the 21st lap, chasing Senna up until the final lap, but to no avail. It was Senna’s sixth win in the season, the 26th in his career and his first in Monza, spoiling Ferrari’s party at their home-turf – something that would happen again two years later.

It was an important achievement to the Brazilian, because Senna was intent on breaking the “Monza curse” that tormented him since 1987 – he always came close of winning, but something got in the way.

In 1987, he spun-out at the Parabolica Turn, almost at the end of the race, handing the victory over to Piquet. The following year, two laps before the end, Senna got involved in a crash with Frenchman Schlesser, which cost him the victory – it was the only race McLaren didn’t win during the 1988 season.

In 1989, more than 20 seconds ahead of Alain Prost, Senna’s engine blew up – a rare occurrence when it came to Honda’s ultra-reliable motors.

The path towards the second world title was already in sight. After the podium, Ayrton Senna added fuel to the rumor fires when, due to the insistence of an Italian reporter, he confirmed his move to Ferrari – but only after his contract with McLaren ended.

Another curious fact about the race: Ron Dennis didn’t believe that a victory in Ferrari’s turf was possible. Senna then made a bet that if he won the race he would take the car home as a gift. The #27 McLaren can be found today at the headquarters of the Ayrton Senna Institute in São Paulo, welcoming all visitors.

What did he say after the race
“I’ll remain in the fight for the championship title until the final race of the season.” 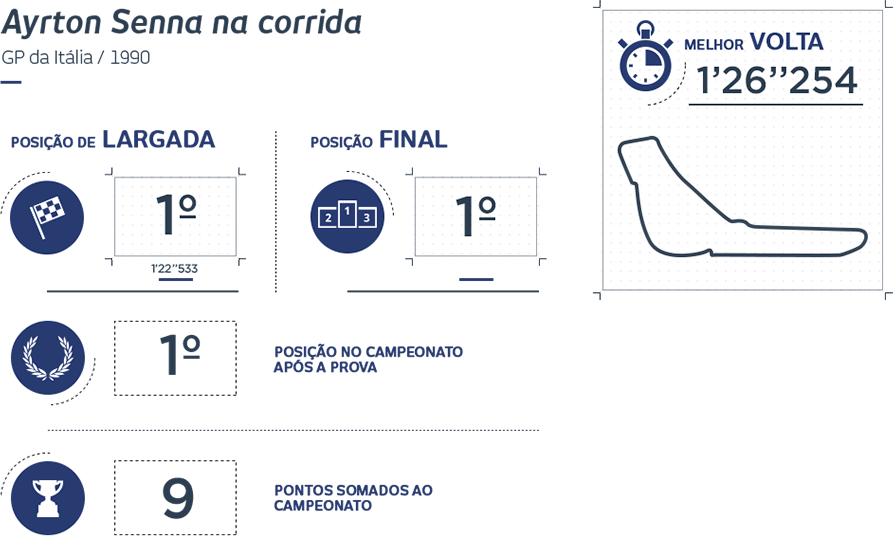