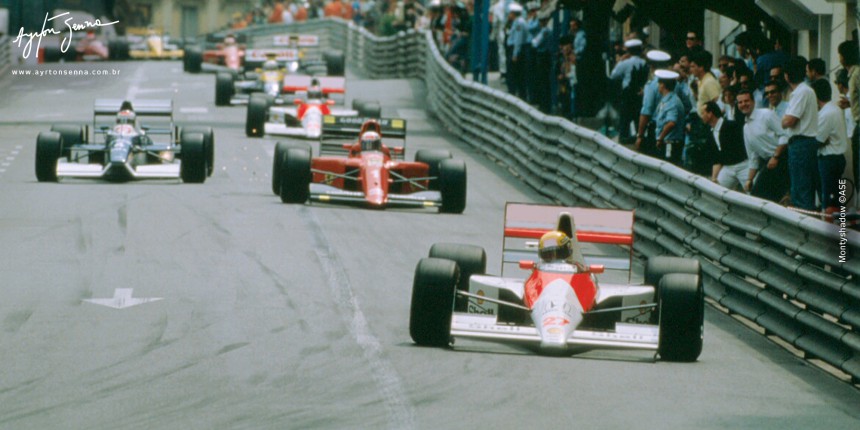 Before the Monaco Grand Prix, the 1990 season had been pretty even. A different team had won each of the three races up to that point: McLaren’s Ayrton Senna in Phoenix (USA); Ferrari’s Alain Prost at Interlagos (Brazil); and Williams’ Riccardo Patrese in San Marino. That hadn’t happened since 1986, when Piquet (Williams), Senna (Lotus), and Prost (McLaren) won the first three contests.

All signs pointed to a heated battle between Ayrrton Senna and Alain Prost, in Monte Carlo, where any mistake when overtaking backmarkers could be fatal since, at the time, the starting grid had 26 cars.

The Frenchman’s Ferrari was shorter, ideal for Monaco’s tight corners. John Barnard, an aerodynamics genius and the Italian team’s designer, believed this could make the difference in favor of the 1989 champion.

Senna ignored Prost’s alleged advantage and secured the pole position on Saturday, with a time of 1min21s314, 0s4632 quicker than the Frenchman, who came in second. The second row had Tyrell’s Jean Alesi and Williams’ Riccardo Patrese. Gerhard Berger, Senna’s teammate, was in fifth, while Thierry Boutsen (Williams) would start in sixth.

The race had two starts. At the first one, Senna did well, but the race was suspended after Prost and Berger crashed on the Mirabeau corner. Since the accident caused a traffic bottleneck, race officials decided to start over.

At the time, drivers were allowed to use their spare cars. So, Prost and Berger were back on the grid. At the second start, Senna was even faster, and paid no mind to his rivals. Drivers were more careful this time and the race went on normally, with just one change-up at the beginning: Berger overtook Pratese for the fourth position.

Senna peeled away. By the time the second lap was over, he was 3s7 ahead of Prost.

Ayrton was so dominant that the race started getting tedious for people who expected a reaction by the Frenchman. The Ferrari driver was more worried about Alesi and Berger, who were right behind him.

Before the 20th lap, Mansell, who was in seventh place and wanted to enter the points-scoring zone, lost his front wing when trying to overtake Boutsen, and had to make a pit-stop. The Britton, who was on a streak of bad luck, spent more than 50s at the garage, and had to make up for the lost time after being lapped by the leader.

On the 31st lap, Prost left the race due to battery issues. Senna was now 19 seconds ahead of the driver in second place, Jean Alesi.

Trying to salvage his race after starting in 10th place, Nelson Piquet was all over Boutsen, trying to take the fifth place, but when trying to make the Loews corner – the slowest in F1 – the Benetton driver spun out and, after being pushed by the marshals, was disqualified.

He wasn’t the only driver in a position to score that ended up retiring from the race. On the 41st lap, Ricardo Patrese managed to take his Williams to the pit-box, but wasn’t able to return due to distributor issues.

Mansell took advantage of the retirements, becoming the star of the show. The “Lion” was already in 5th place and closing in on Boutsen before the 50th lap was over. Ahead of them, Berger tried to overtake Alesi, but the Frenchman and his Tyrell gave no chance to the Austrian’s McLaren.

On lap 55, Mansell overtook Boutsen at the tunnel’s exit and was now in fourth place. But Ferrari’s contentment was short-lived, since a few laps later the Britton was forced to retire with similar issues to Prost’s.

On the 66th lap´, Senna started taking it easy on his McLaren, to spare its Honda engine. The 23-second gap between him and Alesi started to close, especially because Berger was still going after the second position.

In the final lap, Senna kept his cool and crossed the finish line only 1s087 ahead of Alesi and 2s073 ahead of Berger. It was the Brazilian’s 22nd win in Formula One. He did it from beginning to end and also had the race’s quickest lap: 1min24s468, on the 59th lap. It was Senna’s third Grand Chelem in the category.

McLaren’s principal, Ron Dennis, discreetly whispered in Senna’s ear the request from Prince Ranier’s bodyguard. They didn’t want the driver to repeat his 1987 celebration, when he sprayed most of his champagne on Monaco’s ruler.

Both messengers – Ron Dennis and the bodyguard – were the Brazilian’s victims instead.

Senna shot up on the standings, with 22 points, while Berger passed Prost and reached 16. Alesi took the third position with 13, and Prost was in fourth, with just 12 points. 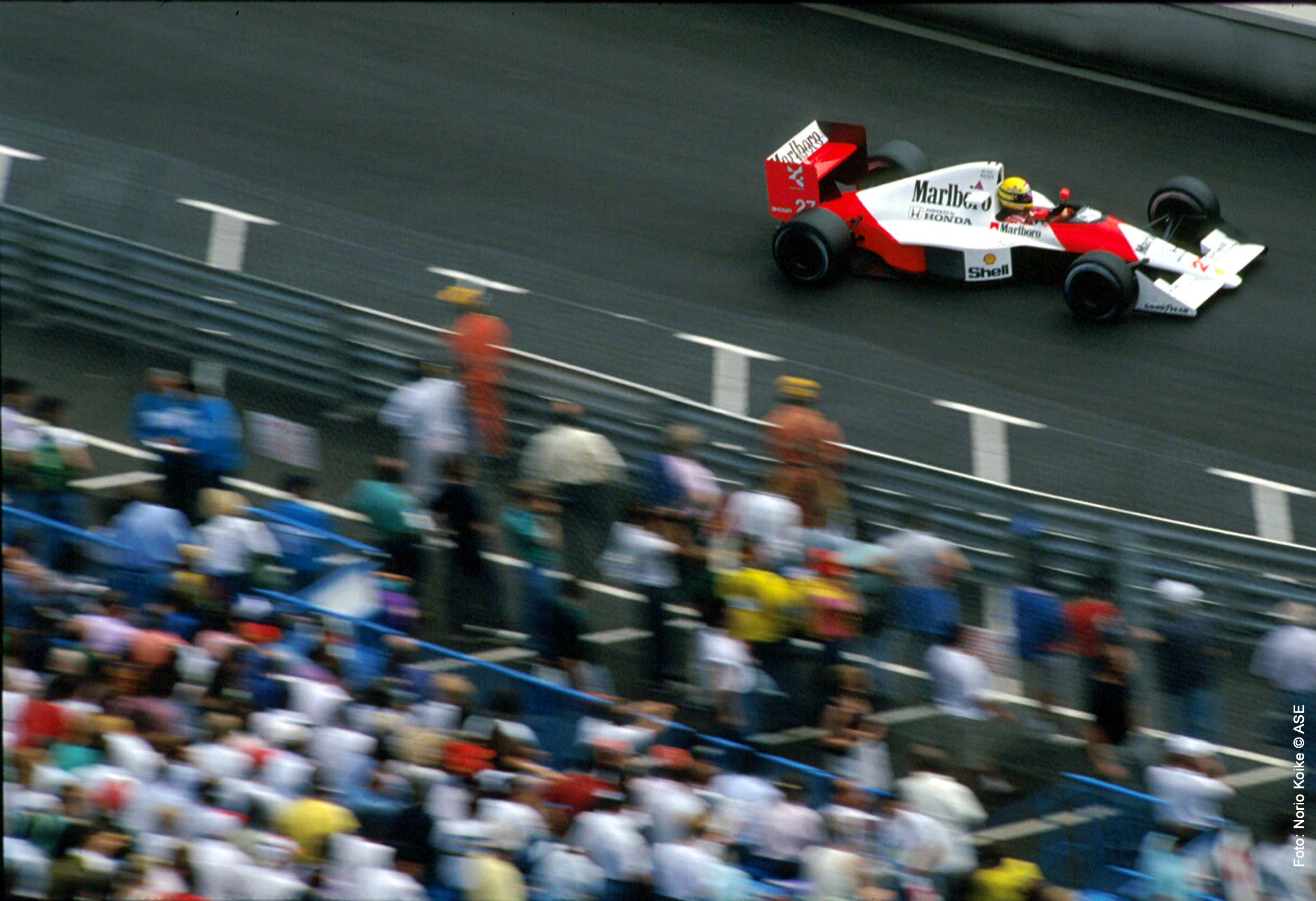 “The car was perfect during the race, only slightly losing power on the last laps.”

What did he say after the race
“The car was perfect during the race, only slightly losing power on the last laps.” 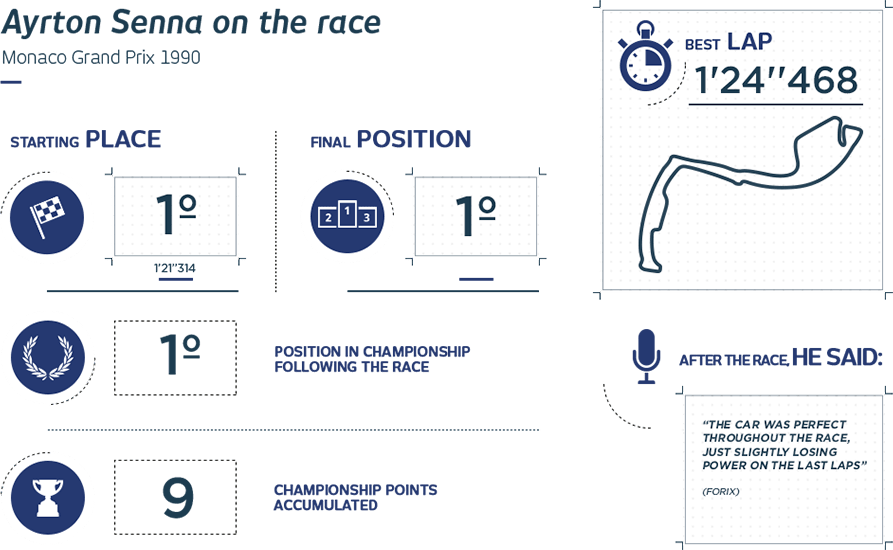