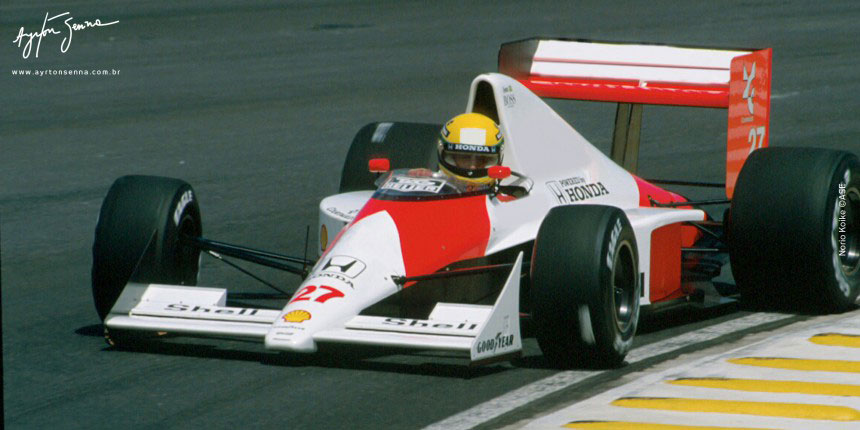 There was a lot of expectations surrounding the 1990 Brazilian Grand Prix, especially due to the Interlagos circuit return to F1. The country’s main racetrack had spent ten years out of the category’s official calendar. Between 1981 and 1989, the races took place at Rio de Janeiro’s Jacarepaguá, where victory seemed to slip between Senna’s fingers.

Born in São Paulo, Senna was driving at home, and he kept a close eye on the renovation of the track, which was renamed Autódromo José Carlos Pace in 1990, after the firs Brazilian driver to ever win a Formula One race in his home-country. One of the modifications was the inclusion of the “Senna S”, tight after the main straight, doing away with the track’s longest stretch. The redesign shortened the track from 7,960 meters to 4,325. New pit-boxes were built, as well as a new control tower, but several mounds of dirt and sand made clear the work had just been concluded.

After his first win of the season, on the streets of Phoenix (USA), Ayrton Senna was the odds-on favorite for the Brazilian GP. Before the start of the practice sessions, he refused to take part in the track’s reopening ceremony, in which a commemorative plaque was unveiled. The McLaren driver was focused on winning for the first time in his own country.

Even though the 1990 season was already in full gear, most Brazilian fans had not forgotten Alain Prost’s controversial title the year before. But most of the criticism – from his arrival at the airport to his drive to the racetrack – was aimed at Jean-Marie Balestre, the Frenchman who presided FIA.

Tha Brazilian people was going through a tough time, mainly due to the austerity measures implemented by then-president Fernando Collor a few days before the race. Ayrton knew his fans were in dire straits, and wanted to bring a measure of joy to Brazilians.

On Friday, Senna had the best lap. And while no other driver was able to improve on Saturday, he scored the pole position by being half a second faster than n the previous session. The starting grid had both McLarens on the first row: Senna in first (1min17s277) and Gerhard Berger in second (+0s611). The second row was made up of Belgian Thierry Boutsen and Italian Riccardo Patrese, both Williams’ drivers. The Ferraris only showed up on the third row: Nigel Mansell in fifth and Alain Prost in sixth.

On Sunday, Interlagos’ stands were completely occupied by the Brazilian public. Ayrton had a safe start and easily remained in front of Berger. Right after that, the Austrian’s tires started to wear out, and he was overtaken by Thierry Boutsen and Alain Prost, who had jumped from sixth to fourth at the start.

Even without Berger’s help to defend his position, Senna increased his lead after Boutsen’s disastrous pit-stop, in which he ran over a new tire and broke his car’s nose.

After an uneventful pit stop, only a slip-up could take the victory away from the Brazilian. That was when, on the 42nd lap, Ayrton crashed with Satoru Nakajima (Tyrell) when trying to overtake him, and had to make another pit-stop to change his car’s nose, lost at the “Duck Bill” corner.

The delay made the Brazilian desperate. He went back to track overtaking several backmarkers, and finished the race in the same lap as the leader. He was on the podium, but in third place.

It was Alain Prost’s third win behind the wheel of a Ferrari and his sixth victory at the Brazilian Grand Prix, a record that stands to this day. Enven with the tire issues at the start, Berger finished in second. Due to a failure of his Renault engine, Patrese retired, handing the fourth place to Nigel Mansell’s Ferrari.

After the race, when asked about the commemorative plaque he didn’t want to unveil, Ayrton Senna answered, half-amused, half-annoyed:

“I think Nakajima has already unveiled it”

What Ayrton couldn’t imagine was that the script for his first victory in Brazil would play out in the very next year.

What did he say after the race
“I believe that Nakajima already did.” (responding ironically about the confusion surrounding the inauguration of a plaque in the autodrome, and remembering the accident during the race) 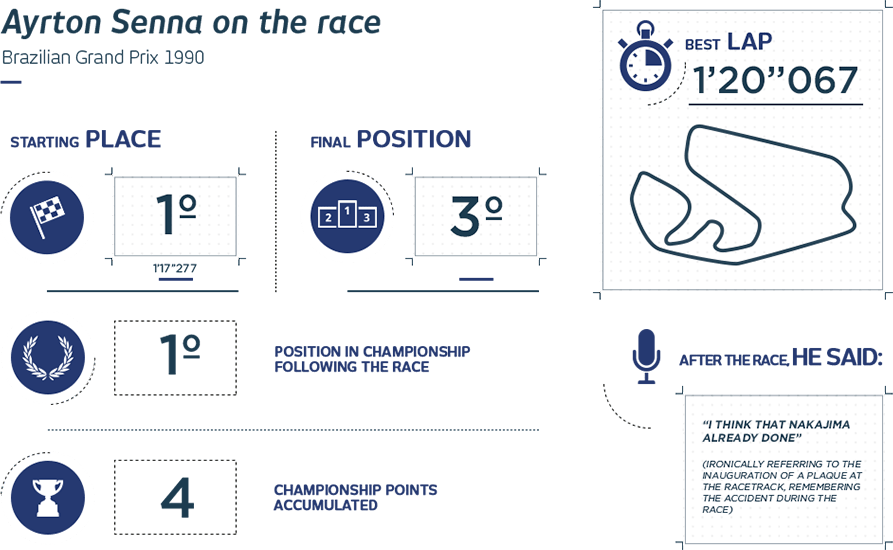