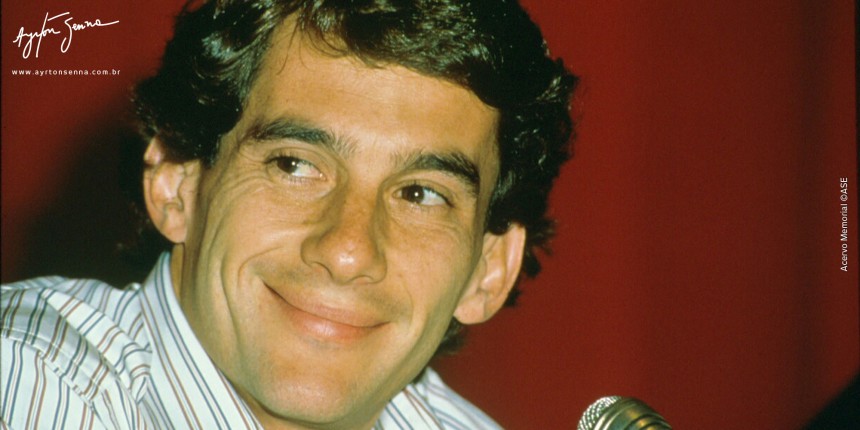 The Canadian Grand Prix, in Montreal, yielded good stories throughout the years it was held. This time, only the five drivers who completed the 70 laps would be able to tell the whole story.

Senna had just won big in Monaco, and during the two-week break between races, he was able to visit his family in Brazil. He boarded to Canada on Wednesday (June 6th) from the Congonhas Airport at around 7 PM.

The McLaren driver took with him 22 points in the overall standings, six more than his teammate Gerhard Berger, and ten ahead of Ferrari’s Alain Prost. As the winner in Canada in 1988, Senna was about to enter his 99th Formula One race. The driver knew that he wouldn’t have the Brazilian public’s undivided attention that weekend, since the World Cup was starting on Friday and the national squad’s opening match was on Sunday, a few minutes after Senna left his McLaren’s cockpit.

“I’ve never been crazy about soccer but it’s impossible to stay out of it on times like these. The World Cup touches the spirit of every Brazilian. It’s a shame I probably won’t be able to watch our first game”, said Senna.

As a matter of fact, one of most iconic moments of Ayrton Senna’s career took place during a World Cup. In ’86, the Brazilian driver won the US Grand Prix, in Detroit, just a day after the national squad had been taken out by France, in Mexico. Right after crossing the finish line, Senna took a Brazilian flag from a fan, without ever leaving the car, and took a lap waving it around. It was a touching gesture that gave Brazilians a measure of joy after a crushing defeat.

In Montreal, Ayrton started the Friday going fast and scoring the training session’s quickest lap, with 1min20s399, six thousands of a second faster than Prost’s pole position time the previous year. On Saturday, as it rained hard on the Gilles Villeneuve Raceway, only times from the previous day were into account for the starting grid. It was Ayrton’s 46th pole position in his career.

Berger rounded out the first row, also with a McLaren. The second row had Ferrari’s Alain Prost and Benetton’s Nanini. On race day, the rain was once again the big obstacle for the drivers in Montreal. Even an experienced champion like Ayrton Senna had to fight to stay on the course.

On the previous Canadian Grand Prix, also under heavy rain, the Brazilian led up until the last three laps, when his Maclaren’s engine gave out and Thierry Boutsen won the race. When the lights turned green, the track was wet, but it wasn’t raining.

Ayrton Senna was taken by surprised by Gerhard Berger too-spectacular-to-be-true start. And there was, in fact, something wrong: the Austrian jumped the gun and moved too early, being penalized with an additional minute on his overall race-time, since, back then, drivers weren’t forced to stop at the pit lane as a form of punishment (drive through).

Even with Bergers false start, Senna kept the lead until his first pit-stop, when drivers changed their wet tires for dry ones. McLaren worked faster with the Austrian, who came back ahead, but had practically no chance of winning, since his penalty had been announced soon after the start of the race.

On lap 14, a common situation in Canada happened again: Nannini unfortunately ran over a groundhog, which ended up affecting the whole race for the Italian, who was getting close to the McLarens.

Five laps after that, Boutsen fought for second place with Prost (Senna was still in the lead), when the Belgian driver was overconfident when trying to pass, hit a puddle out of the ideal path and spun towards Larini, crashing with the backmarker. It was just one of several accidents in a race that only five cars were able to finish on the same lap. In the end, 12 out of 26 drivers spun out during the race.

Another heated dispute took place between nelson Piquet and Prost’s and Mansell’s Ferraris. The Benetton driver took the Frenchman’s second place spot on the 49th lap, and the Britton also passed the Frenchman right after that, when closing in on the Hairpin – the track’s main overtaking point.

Ayrton Senna had to combine luck, concentration and skill to avoid hitting the various cars that had spun out and crashed while the track wasn’t 100% dry. But no rival was able to threaten another victory by the driver who was clearly on the path towards his second title. In the end, a Brazilian one-two a few minutes before the soccer squad’s debut at the World Cup, against Sweden, in a game that ended 2:1 for the Brazilian team.

Mansell rounded out the podium in Canada. Berger finished ahead of Prost, even after suffering the penalty. Derek Warwick finished in sixth place. Senna was still the overall leader. Now the Brazilian had 31 points. Berger went on to 19, and Prost to 14.

What did he say after the race
“I was startled when Berger flew past me.” 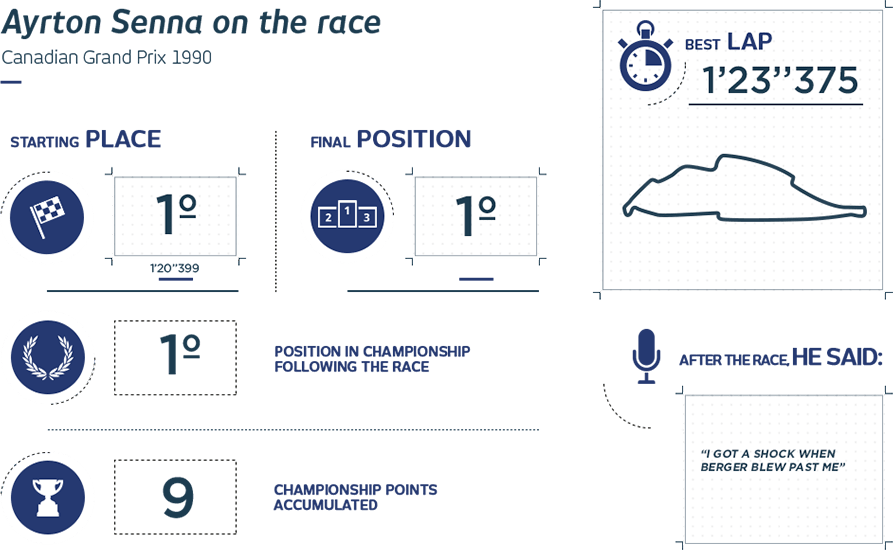