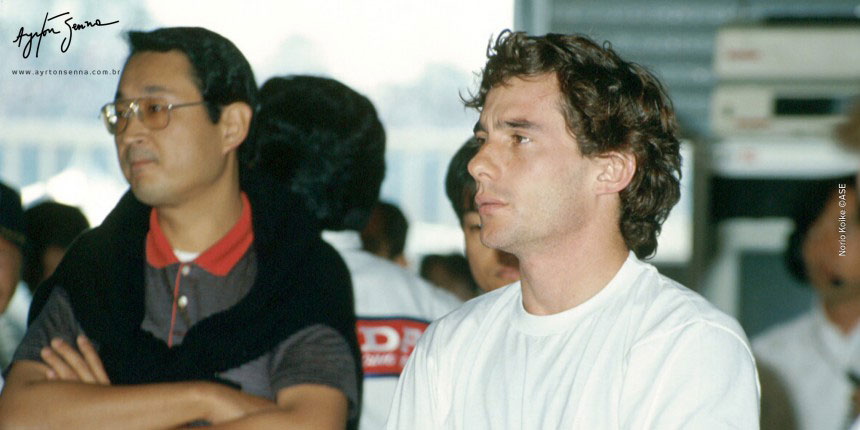 For the third year in a row, Ayrton Senna and Alain Prost battled for the F1 title in Suzuka. Ayrton Senna arrived in Japan with 78 points, nine more than Prost in the Drivers’ World Championship. In order to win his second Formula 1 title even before the final race, he only had to out-point the Frenchman.

On Wednesday, Senna asked the race organizers if they could swap the first two positions of the starting grid, putting the first-placed driver on the outside and the second-placed on the inside, closer to the wall, where the track was dirtier and less grippy. Even though Senna’s request was denied, he kept working hard during the qualifying sessions to start in first.

On Saturday, McLaren’s efforts to secure a win focused on dominating the first row of the starting grid. Ferrari had the same objective. Both considered that a team strategy would favor either Ayrton Senna or Alain Prost.

Neither of the two teams was successful: Ayrton Senna made pole position in spectacular fashion with a one-second advantage over Prost, but Nigel Mansell finished ahead of Gerhard Berger. The two contenders for the title started in the first row.

Tension was high at the beginning of the race. During the pre-race briefing, the Japanese Grand Prix was the setting of another controversy. When the race director, Roland Bruynseraede, started giving the routine instructions, he decided to talk about “missing” the chicane and was questioned by Piquet, as shown in a previously–unseen scene of the “Senna” documentary, by Asif Kapadia.

Race director: “The race will have 53 laps. Whoever misses the chicane will have to go back and follow the correct line.”

Nelson Piquet: “The safest thing is: if you miss a chicane, the stewards stop you. Alright? If there’s no traffic, they lets you go. If you have to turn around and go backwards against another car, that’s dangerous. Because if another car comes and also misses, it will crash into you.”

Race director: “Okay. Does everybody feel that way?”

At this point, Senna gets up and, speaking directly to the race director, walks towards the room’s exit.

Senna: “I cant’s stand it. I can’t stand this. It’s a joke. After what happened last year, it is a joke, this situation. You just proved here. I said nothing and you see somebody raising the point and everybody agreeing. And last year was really bad for me.”

Shortly before the start, the Brazilian Roberto Moreno, who replaced Alessandro Nannini at Benetton, spoke about the 1990 race between the McLaren and Ferrari drivers:

But the eagerly awaited duel between Ayrton Senna and Alain Prost did not last more than eight hundred meters (half mile), or nine seconds. Right after the first corner, the drivers became entangled and exited together through the run-off area of the Suzuka track.

When the dust settled, Ayrton Senna was the new two-time World Champion, taking revenge over Alain Prost in a very similar scenario to the 1989’s result that had favored the Frenchman.

Senna thought it the crash was nothing unusual. “Last year, I lost the title in a crash. This year, I’v won it. The only difference was that it happened at the beginning of the race”, he said to reporters. When asked if it was sad to become champion without stepping on the podium in the decisive race, Ayrton was emphatic: “I’v been on the podium more than any other driver this season.”

To put the icing on the cake for the Brazilian celebrations that day, Nelson Piquet won the race and Roberto Moreno, ironically, was second in a one-two finish for Benetton.

It was Ayrton Senna’s 109th Grand Prix. At 30 years old, he was a two-time champion. It was the culmination of an incredible and consistent season. Ayrton won six times and made the podium in 11 of the 16 races, that year.

What did he say after the race
“I requested the whole weekend that the pole position start from the other side of the track, but they refused, creating a problem which ensured that this wreck happen.” 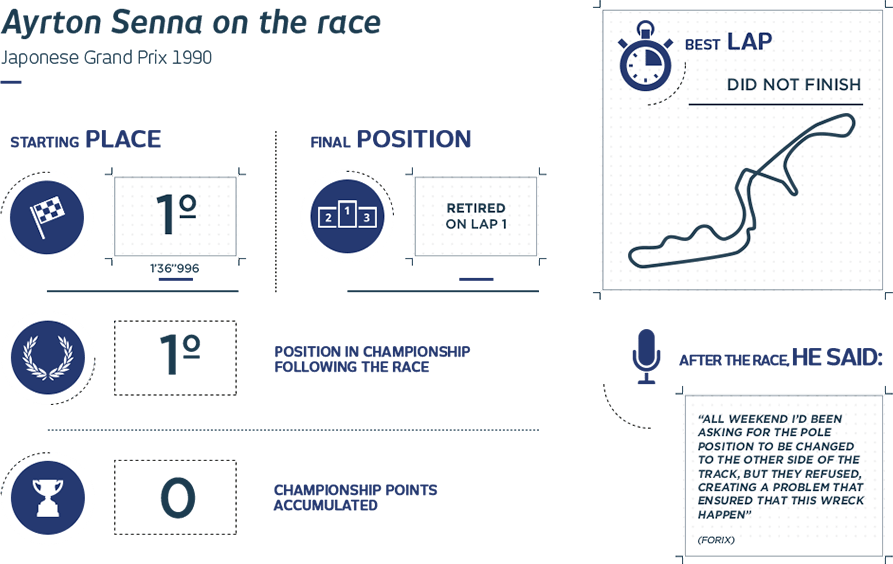