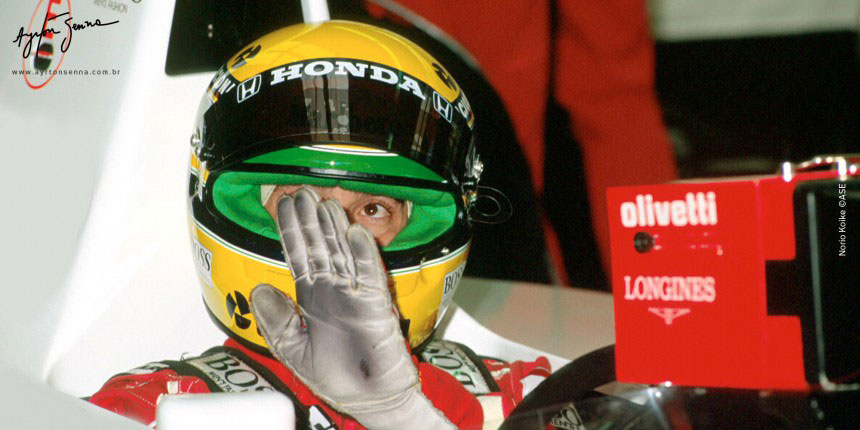 Ayrton Senna arrived at Spa-Francorchamps, in Belgium, in a comfortable position in the championship. He had 61 points, twelve more than Nigel Mansell, who was in second place. The problem wasn’t in the standings, but in his car’s performance in the last few races. The Britton had had three triumphs in a row (France, England and Germany), putting Ayrton’s dominance in jeopardy, even though the Brazilian had won the season’s first four races (USA, Brazil, San Marino and Monaco).

“Things were looking good for us, but now everything is up in the air. I think Williams fares better in high-speed circuits, like Monza and Spa, where the next race is taking place. McLaren can even things out in average speed circuits, like Portugal and Spain’s new one, in Barcelona, but we’ll have to count on luck to avoid off-track issues and keep fighting for the title. What matters is that we are working hard to make our car competitive in high-speed circuits”, said Ayrton Senna to reporters before the qualifying sessions.

To break a dry spell, there’s nothing better than starting the weekend with a pole position, and that was what Senna was after. On Friday, Ayrton made it clear that he was gunning for the best position on the starting grid. He did 1min49s100 on the first qualifying session, 1s566 quicker than Mansell. The Brazilian’s lap was already one-second faster than his own pole position run the year before. But he wanted more.

On Saturday, he did even better and scored the 58th pole in his career. With a time of 1min47s811, Senna was 1s010 faster than of Alain Prost and took the first place. Mansell came in third, but just 0s007 behind the Frenchman.

Senna had a great track-record at Spa: he had won in 1988, 1989 and 1990, always from start to finish, in Belgium. Besides his three McLaren wins, he also had a victory as Lotus driver, in 1985, at the track in the Ardenas region.

On Sunday, while everybody’s eyes were on Ayrton Senna, Mansell and Prost, Michael Schumacher made his debut for team Jordan. The German didn’t make any further than the first lap, due to a broken clutch, but he made a splash by starting in an impressive seventh position with a car from a rookie team.

Prost and Mansell also didn’t have a good Sunday. The Frenchman retired on the third lap due to engine problems in his Ferrari. The Britain started well, overtaking the Ferrari driver on the second lap, but was forced to retire due to an electronic problem on lap 22, when he was leading the race.

Despite the “Lion’s” problems, Senna never had an easy race. He led for the first 14 laps, But after a long pit-stop, he ended up being overtaken by rivals who stopped later. That meant the McLaren driver had to take back a few positions: so much so that, besides Senna and Mansell, nelson Piquet, Gerhard Berger and Jean Alesi also led the race.

The Brazilian took advantage of his rivals’ pit-stops to get closer to Alesi. But when he was about to Strike, Senna found out he had gearbox problems, and shifting gears became difficult.

Before the Eau Rouge corner, on lap 27, the two-time champion’s shifter became “stuck on second gear”. He later recalled: “I tried to put it on fifth, but it changed to a much lower gear, probably second, and the engine’s RPM shot up. I thought it was over right then and there”. According to him, after finishing almost the full lap on that gear, he suddenly “found” the sixth gear. “From there, I very carefully made my way back to fifth and third, but started avoiding the two lowest gears. All I thought about was keeping my position”, Ayrton told reporters after the race.

Senna started losing sight of the leader, while Piquet, Patrese and De Cesaris gained on him.

On lap 30, it was Alesi’s turn to see a great race go down the drain. As it had happened with his countryman and Ferrari teammate, Alain Prost, his engine gave out.

Driving with difficulty, Ayrton managed to push his car to the finish line, in a heroic victory, after a race in which leadership changed hands four times and seven different drivers were among the top-three at different points in time.

Three laps from the end, De Cesaris saw his dreams of achieving a great result with his Jordan crumbled down, and the McLaren one-two fell on Berger’s lap. Nelson Piquet rounded out the podium and Roberto Moreno not only finished in fourth but also had the race’s quickest lap. It was a historic result: three Brazilian drivers in the top-four.

Who better than Ayrton Senna to recount how he scored pole position and victory – his fifth on the Belgian circuit and sixth of the year:

“Spa-Francorchamps is my favorite circuit because of it’s uphills, downhills and corners which are very demanding for drivers. Not to mention the fact that I won in 1985, 1988, 1989 e 1990, and also got pole position three times. I admit that I wasn’t expecting to win this year because our car hasn’t evolved enough to beat Williams. I also had the same gearbox problems that I encountered in Interlagos. By luck, Mansell was already out, due to his automatic transmission failure. The important thing was to score in Belgium. Even with difficulties, Williams has very sophisticated equipment. When compared to ours, it becomes a joke. It gives their car a few second lead on each lap. This gap was made smaller with the new Honda engine, equipped with electronically controlled variable valve timing. This is the only way we secured our fifth win (on the circuit), which put us in the fight for the title. An unforgettable triumph on a highly demanding, but exciting course.”

Ayrton took off on the championship standings, with 71 points, while Mansell kept the same 49. Five races from the end of the season, his third championship title seemed closer and closer.

What did he say after the race
"An unforgettable triumph on a highly demanding, but exciting course.”