After six races in the 1991 season, Ayrton Senna had a comfortable lead in the standings. The Brazilian had won the year’s first four races (EUA, Brazil, San Marino and Monaco), made the podium for the fifth time that year in Mexico and had 44 points overall.

But as big as the gap between him and the second-placed driver in the standings was – Riccardo Patrese was 24 points behind – Senna was worried with the Wiliams’ evolution and with McLaren’ s lack of development after the start of the season.

Williams had control of the situation, in France, even though the Magny-Cours was a new addition to the F1 calendar. It would be very hard to beat Patrese and Nigel Mansell, and Ayrton realized that, in a normal race, he would have a hard time finishing among the top three.

But he was known for taking his racecars beyond their limits and, showing a lot of experience and tenacity, he came out of the qualifying sessions with the third spot in the starting grid. The pole position went to Riccardo Patrese – his third in a row. He posted a time of 1min14s559, 0s230 faster than Alain Prost’s, who would be starting next to him with his Ferrari. Ayrton was just 68 thousandths of a second slower than the Frenchman, so he would be on the second row alongside Nigel Mansell.

The crowd had to face a few hardships in order to watch the firt F1race ever at Magny-Cours, especially due to the region’s lack of infrastructure. At the time, the area surrounding the circuit didn`’t offer enough hotel rooms to accommodate the full F1 travelling circus. Things were different at Paul Ricard, the French circuit where the six previous races had taken place, which is located near Marseille, one of the most developed regions in the country.

At the start, Patrese couldn`t get any traction, so Prost took the lead. Mansell jumped from fourth to second and Senna stayed in third. With the Italian`s setback – he fell to tenth place and now had to claw his way back to the front – the Brazilian was focused on racing with the tournament`s big picture in mind.

After only a few laps, the Honda engine started showing Ayrton he wouldn`t be able to keep up with Renault one that powered Mansell’s Williams at Magny-Cours. Senna’s teammate, Gerhard Berger, had even worse engine problems: his motor blew up in the sixth lap, forcing him to retire.

Prost was making it clear that the Ferrari 643, their current model, was much better that the one used by the team at the start of the year. The home driver left the Britton behind and led until the 21st lap.

On lap 22, after facing several problems trying to overtake backmarkers, Prost was passed by Mansell on the Adelaide corner. Prost had his revenge during the pit-stop. Ferrari’s change of tires was quicker than William’s, and the winner of the previous three French Grand Prix regained the lead on lap 32.

Meanwhile, Senna had to deal with pressure from Alesi, who was in fourth with his Ferrari, and Patrese, who recovered nicely and was already in fifth. McLaren had a good pit-stop and the Brazilian driver came back between the two adversaries.

After Alesi’s pit-stop, Senna was back in third place and gained a few seconds on the Ferrari. Before both drivers’ pit-stops, they were just 1s7 apart. Afterwards, the Brazilian had an advantage of 4s1.

In the lead, Prost was having a hard time holding Mansell back. The “Lion” caught up to the Frenchman and overtook him on lap 55, in the exact same place where he had become the race’s leader before the pit-stop. the only difference was that, this time, Prost didn’t leave any room on the inside. So Mansell, being Mansell, went wide and took the lead back in a beautiful maneuver.

Only 17 laps away from the end, Mansell kept control of the race and crossed the finish line 5s ahead of Prost’s Ferrari, whose last win had been at the 1990 Spanish GP. Ayrton Senna rounded out the podium after fending Alesi off – again. There was a difference of just 0s9 between them, at the checkered flag.

Senna was satisfied with third place – especially after the scare he got from his on-board computer, when it mistakenly showed an empty tank four laps to the end.

“I fought with the computer then it worked.”

And he was even ironic when talking about Mansell’s win in Alain Prost’s home country:

“The worst was Mansell’s discourtesy toward the French.”

Senna started the race 24 points ahead of his closest competition. After the French race, the difference increased to 25 points. The Brazilian now had 48 point, against Mansell’s 23. Patrese, who finished the race in fifth, fell to third place overall, now with 22 points. Prost climbed up to fourth place, with 17 points.

The season’s 8th race was scheduled for Silverstone, on the following Sunday.

What did he say after the race
“I fought with the computer then it worked.” 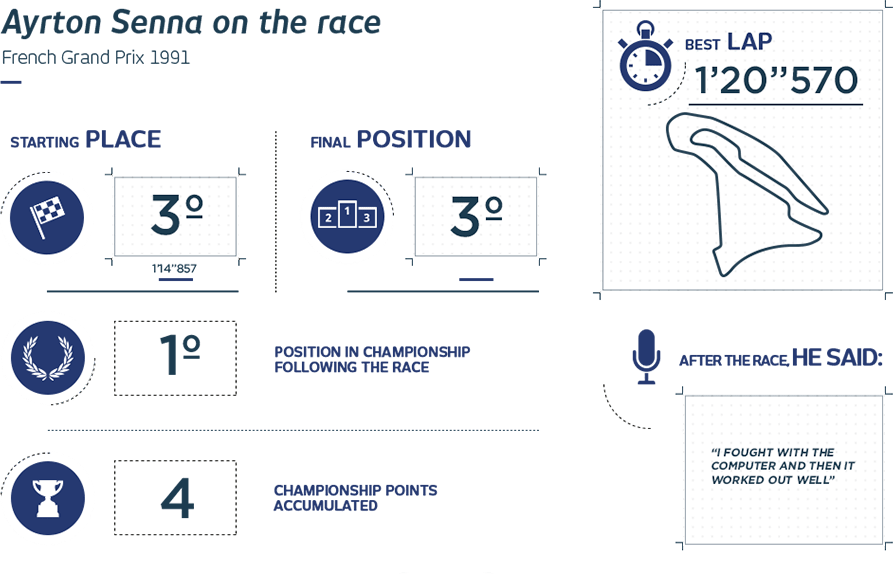