The four victories in the beginning of the season secured Ayrton Senna’s place as leader of the Drivers’ World Championship. But the points gap had decreased in the European season and Williams performance was impressive. McLaren’s main rivals won four races in a row, one with Ricardo Patrese and three with Nigel Mansell. The Brazilian was eight points ahead of the Britton (51 to 43) and the Hungarian Grand Prix would once again pit the biggest names in the 1991 season against each other.

“It’s not going to be easy to beat Williams in Hungary”, admitted Senna to journalists in the week preceding the race. “But it’s the only track where the Renault engine doesn’t have such a big advantage – just a little one, Kast year, when we had a great 10-cylinder engine, I almost won the race when I caught up with [Thierry] Boutsen, only I was in the inside, with no room to make the corner, on my right. And the only overtaking spot is at the end of the straight, and even then you have to force it”, recalled Senna, who finished exactly 288 thousands of a second after Boutsen, in second place, at the exciting end of 1990’s race.

On Saturday, Ayrton Senna scored the 57th pole position in his career, after five GPs – since Monaco – not starting in the top spot. To categorically end his dry spell, he had a time of 1min16s232, 1s232 faster than Patrese, who was starting next to him, on the first row. Right behind Ayrton, Nigel Mansell and Alain Prost, driving a Ferrari, shared the second row.

Even though Hungaroring was probably going to work in his favor, since its narrow track made overtaking difficult, Ayrton knew that having the pole position wasn’t enough to secure a win. After running out of fuel in the two previous races (England and Germany), Shell brought a new formula to the contest in Hungary, which put Senna’s mind at ease when it came to fuel consumption, according to McLaren’s principal himself, Ron Dennis (information obtained via press-release).

“I can’t give an exact percentage of how much the new fuel is going to improve performance, but it’s a big improvement, and we are incredibly happy”, Ron Dennis told journalists.

At the start, he fought with Riccardo Patrese (Williams) for the lead, and only after the first braking point – where the Brazilian’s front right tire briefly sopeed spinning – did he take the lead. All his rivals at the front of the pack also maintained their positions, and soon a line of cars was formed at the Hungarian circuit.

The pressure was on Senna for the duration of the race’s 77 laps. After Patrese had brake issues and was passed by his teammate, Nigel Mansell, the Brazilian had his work cut out for him, trying to hold back the “Lion”. In the end, Senna crossed the finish line just 4s6 ahead of the Williams, whose two drivers ended up on the podium for the second time in a row.

The McLaren driver built his victory through preparation and a smart choice of tires. He took into account that most of the track’s corners are to the right, and opted for a mixed set, with hard tires on the left side and soft ones on the right.

“I knew it was going to be hard at first. But if I could hold tight, from the halfway point on, the tire choice was going to make up for our technical inferiority in relation to the Williams”, explained the driver after the race.

He also used his head. Dominating the race, he anticipated the braking points on many of the corners, forcing Riccardo Patrese and Nigel Mansell to break hard. Thus, he got important thousandths of a second.

The race gave Ayrton Senna room to breathe in the fight for the title. The two-time world champion had 61 points, against Mansell’s 49, just six races from the end of the season.

And the victory brought back some joy to the McLaren Honda garage, easing the pain all the Honda mechanics and employees were feeling. In the week prior to the GP, Soichiro Honda, the company’s founder, had died. That was why the mechanics used a black armband throughout the weekend, in Hungary.

The team also regained the lead in the Builder’s Championship. With Ayrton’s win, and Berger’s fourth place, they now had 83 points, against Williams’ 81. 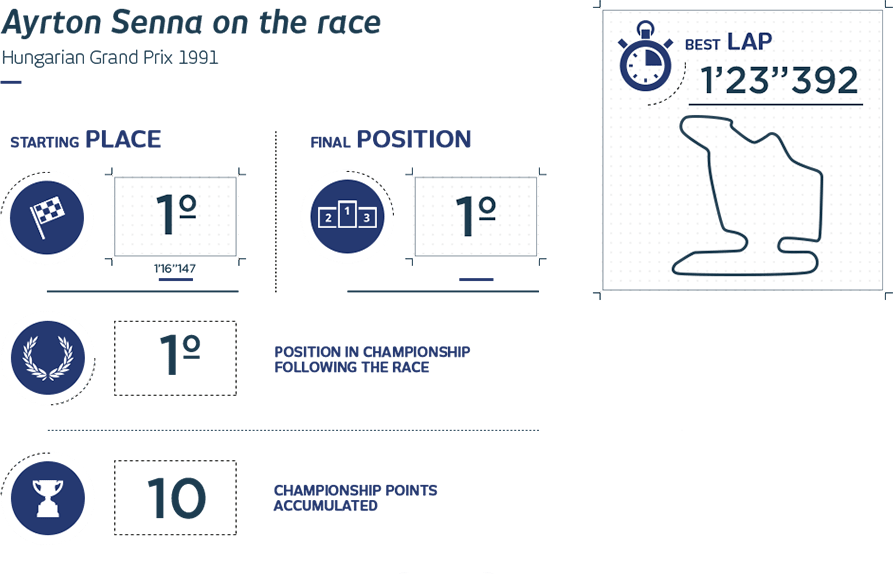