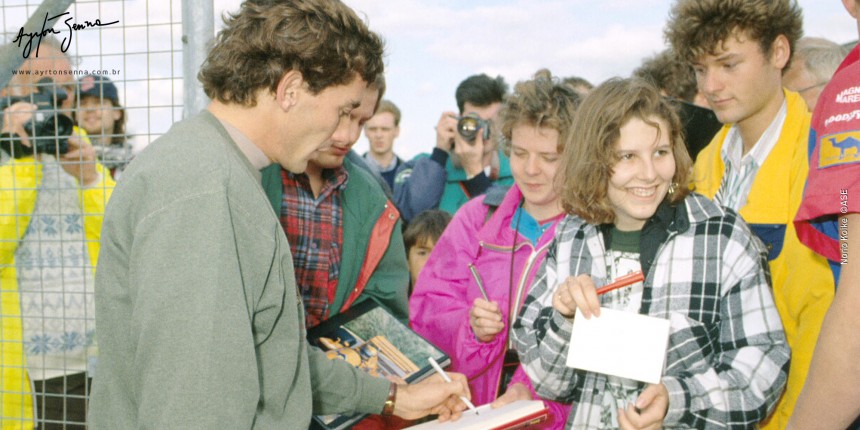 Ayrton Senna’s big challenge, in England, was to beat the Williams, which were clearly superior to his McLaren. It was the eighth race that year, marking the halfway point of the season. Before arriving at Silverstone, Ayrton had a comfortable advantage over Mansell – the Brazilian had 48 pints, against the Britton’s 23. Ayrton had won the first four races, in 1991, but was coming from three races without a first-place finish.

Just as he did at the French Grand Prix, Senna managed to position himself between Nigel Mansell (in the pole position) and Riccardo Patrese (in third).

At the start, a glimpse of hope: he was able to jump out in front. But it on the first straight, Mansell easily passed his McLaren and sped away for an uncontested victory. Patrese started badly and was hit from behind. Third in the standings, the Italian was practically out of contention after being forced to retire at Silverstone.

“It seemed as though Mansell accelerated using a turbo engine and I, an aspirated engine.”

Ayrton tried an unusual strategy to surprise his adversaries. He was the only driver among the top-five who didn’t stop to change tires throughout the race. Knowing he couldn’t compete with the Williams on the straights, he tried to secure the second place, with Gerhard Berger, his teammate, way behind.

But Ayrton wasn’t counting on fuel consumption being McLaren’s biggest problem. After 58 laps in second place, the car stopped on the last lap, even though the gauges showed he had gas to spare. his place on the podium ended up with Alain Prost, who was doing what he could with his Ferrari in what turned out to be a disastrous season for the Italian team. Ten months had passed since the “tifosi” – Ferrari’s fans – had had cause to celebrate.

During the cool-down lap, Mansell parked his car in front of Senna’s McLaren. The Brazilian put his right leg inside the Wlliams’ cockpit, grabbed on the roll structure and took a ride, in what has become one of F1’s most iconic images. A marshal even tried to stop him, for safety reasons, but no one could help being moved by the scene: two F1 legends literally sharing the same car. Nowadays, there are rules against it.

Even one lap behind, Senna finished in fourth, since every driver from fifth place (Nelson Piquet) down had been lapped by Mansell. In the previous British Grand prix, one ear before, the “Lion” had said he was about to end his career, since he felt demotivated at Ferrari. One year later, he had clearly changed plans, at Williams.

After the race, Senna revealed only to the Honda engineers that there was another electrical failure. It was the opposite of what had happened in France, when the dashboard falsely reported he was out of gas at the end of the race.

“It was a disappointment to lose second place in the last lap, when coming in third was already a victory.”

At the end, he warned the team’s technicians:

“If we aren’t on equal ground, technically speaking, with Williams in three races, the championship will be lost.”

It was the first time in the season Senna was kept out of the podium, but he kept his lead anyway, now 18 points ahead of Mansell (51 to 33).

What did he say after the race
“If we aren’t on equal ground, technically speaking, with Williams in three races, the championship will be lost.” 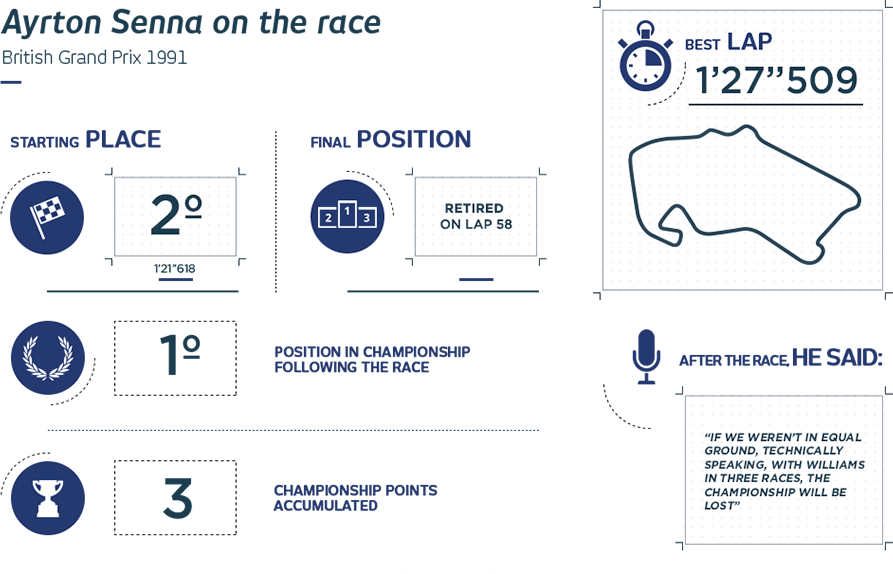