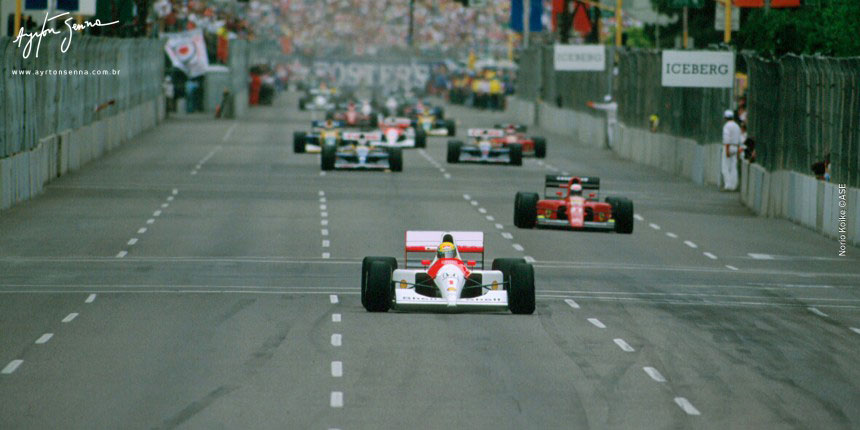 It’s impossible to tell the story of Formula 1 from the late 80s into the early 90s without mentioning the racetrack duels between Ayrton Senna and Alain Prost.

In Phoenix, it was time for another showdown: Prost had won the race in 1989, Senna in 1990. There was no way to proclaim which one was the favorite, especially because it was the year’s first race.

The ’91 season brought a new points system. The winner of each race would be awarded 10 points, instead of 9, which meant the top position was more valuable than ever before. The following five positions would earn the same amount of points as in the previous year. It was the first change to the points system since 1960. Another big change : none of the year’s results would be discarded.

McLaren would be racing the same drivers, Ayrton Senna and Gerhard Berger, as would Benetton, with the Brazilian duo of Nelson Piquet and Roberto Moreno.

Ferrari kept Alain Prost for another year, while Nigel Mansell went back to Williams. The Britton was replaced by the young and talented Jean Alesi who had fought a heated battle against Senna, at Phoenix, in the previous year. Mansell’s teammate at Williams was Riccardo Patrese, since Thierry Boutsen had moved on to Ligier.

Before the qualifying sessions, to alleviate pre-race tension, Senna visited some traditional American ranches, where he practiced lassoing and was given cowboy holsters. When asked if he was target practicing, he smiled:

“No, I am training to draw first.”

Practice seemed to have been effective, since the first duel of the season was decisively won by the Brazilian driver.

He won pole position on Saturday, with a time of 1min21s434, 1s121 faster than Prost. The second row was made up of Riccardo Patrese’s and Nigel Mansell’s Williams, while Nelson Piquet and Jean Alesi shared the third row.

On Sunday, Senna started well and the first few positions remained unchanged. Ayrton, as usual in street-circuits, peeled away from his rivals and, in the tenth lap, was already 10 seconds ahead of Prost.

While Senna raced with ease, in the lead, a fierce battle for second place raged on, between both Williams and the Frenchman’s Ferrari. The Italian team’s life only became easier once Mansell and Patrese left the race, both with gearbox issues.

Ayrton made a pit-stop to change tires, but his 27th win in Formula 1 was never threatened. Nelson Piquet took advantage of Prost’s pit-stop and the Williams’ retirement complete a few laps in second place. But the Ferraris came back with brand new tires and took the position from him. Prost raced on to a second place finish, while Alesi had to retire due to gearbox problems nine laps from the end.

Seeing that his rivals were having gearbox issues, Ayrton decided to take it easy in the final laps. The Brazilian was 45 seconds ahead of the competition, but he crossed the finish line, in Phoenix, “only” 16s322 ahead of Prost, after leading from start to finish – 81 laps in a 2 hour race.

Prost had to settle for the rookie trophy he received from the Phoenix Country Club, for winning a golf match, as well as for making the podium, alongside Nelson Piquet, who came in third place with his Benetton. Overall, there were eight world titles on that podium (two won by Ayrton, four by Prost and three by Piquet). Undoubtedly, it was a historic day in F1.

After the race, Ayrton Senna went home with “just” the first 10 points of the Championship, as he had forgotten his victory medal inside his racing suit.

What did he say after the race
“It was a great way to start the season and particularly exciting because the car was a novelty.” 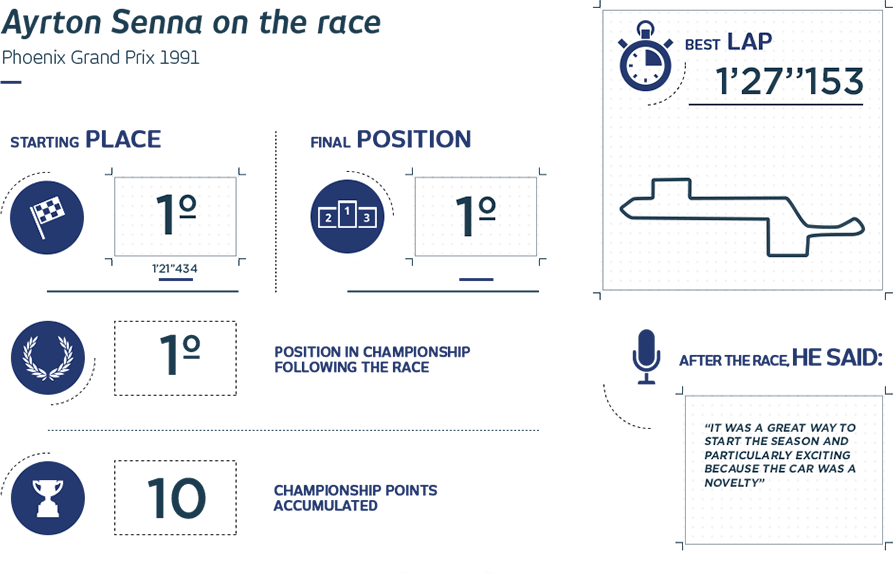