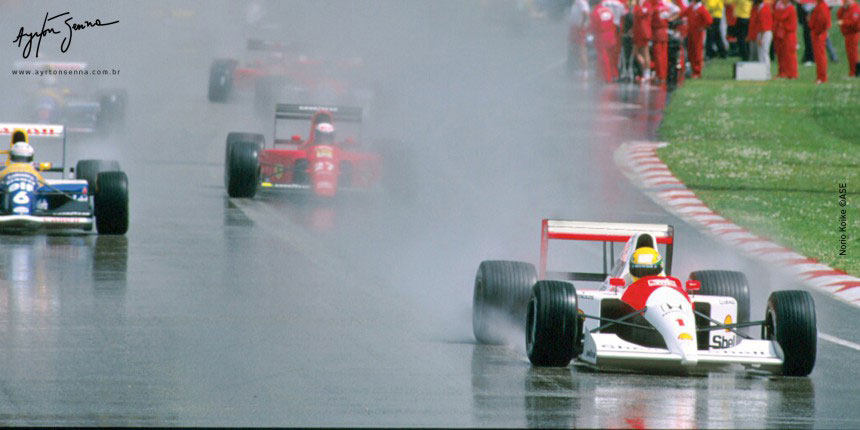 The passionate Italian public made themselves known at Imola. There were around 150 thousand Ferrari fans ready to support Alain Prost and Jean Alesi, drivers from the team. The Italians believed it was a great opportunity for the Maranello team to break an uncomfortable dry spell: it was eight years since the team had last won at the Autodromo Enzo and Dino Ferrari.

Even with Senna’s sixth consecutive pole position the day before, they were confident. They dreamed of Ferrari once again being victorious and this was the perfect setting for it. Senna’s time was 1min21s877 on Saturday, just 0s080 faster than home driver Ricardo Patrese, from Williams, clearly a rising power in the 1991 season. Alain Prost and Nigel Mansell made up the second row. Gerhard Berger – Senna’s McLaren teammate – started in fifth place.

On Sunday, with a heavy rain pounding the track, not even the most devoted fan was ready for what was about to happen: Prost spun off the formation lap and did not even make it to the starting grid, making his situation in the championship even worse. Things didn’t look good to the Frenchman: besides adding to his reputation for not being as good in the rain as his biggest rival, Senna, Prost and his team went down a path that would culminate with his firing even before the end of the season.

It bears mentioning, though, that track conditions were in fact very dangerous. Berger also spun off into the same place Prost did but managed to bring his car back to the track and take his place on the grid.

At the start, the track was very slippery. Nelson Piquet, still driving for Benetton in 1991, spun off in the very first lap. Patrese jumped ahead of Senna, while Mansell ended up at the end of the pack, due to gearbox problems in his Williams. The Britton was also hit by Brundle and lost control of his car on the first lap.

Things got worse for Ferrari when Alesi skidded and went off the track on the second lap. The sad scene which summed up that day was the early exit of over half of the race spectators. It wasn’t a good day to be a Ferrari fan.

The duel between Patrese and Senna was promising – after all, they had won the last two San Marino GPs. The track started to dry up and Senna caught up to him in a short time. When he was getting ready to overtake, the Italian made a pit-stop with issues in his Renault engine.

Those who stayed saw another Senna show: a 61-lap stroll and his third victory in three races that season. In an interview with a local TV station, Senna congratulated those who stayed in the grandstands:

“I dedicate this victory to the most ardent racing fans in the world.”

Senna was joined on the podium by Gerhard Berger, in a McLaren one-two, and J. J. Letho, a Dallara driver, who was living the greatest day in his career: it was his first and only time on a Formula One podium. Since most of the stars had retired, it was a great day for smaller teams, who scored valuable points in the championship. Minardi’s Pierluigi Martini finished in fourth and Lotus Mika Hakkinen was fifth, ahead of his teammate, Julian Bailey, who finished in sixth, the last position to award any points.

And speaking of points, Senna was way ahead in the standings. After winning in San Marino, he was three-for-three in the championship, totaling 30 points (in 1991, drivers started getting ten points per victory, instead of the usual 9). Berger was in second, with 10, while Prost had 9 and Mansell, who would become Senna’s greatest adversary in the final races, fighting for the title, remained at zero after three races – a gap that, later, the Britton would find difficult to close.

What did he say after the race
“I dedicate this victory to the most ardent racing fans of the world.” 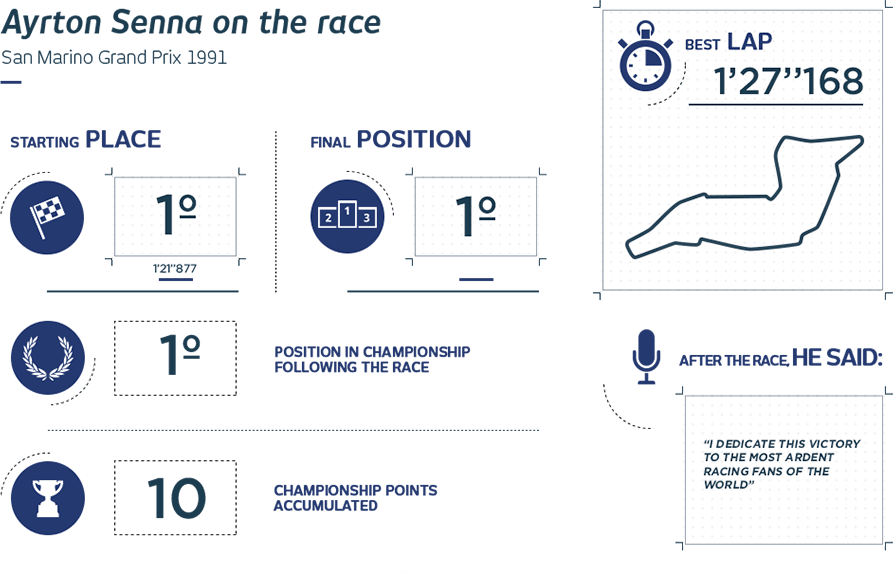