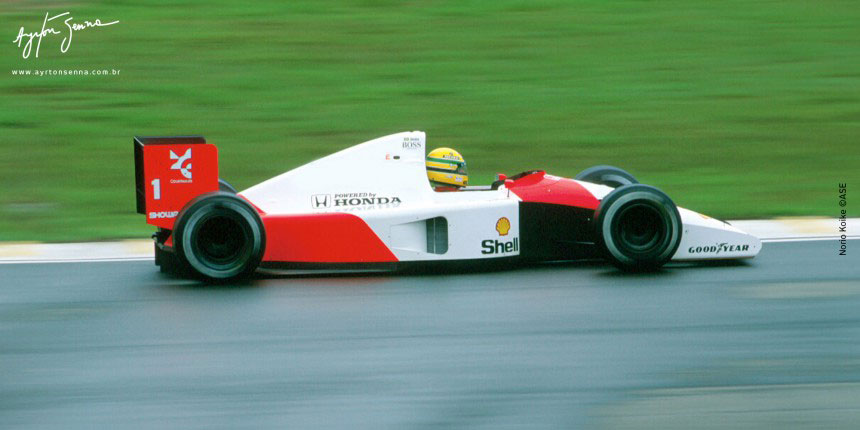 Ayrton Senna turned 31 two nights before the race, but he didn’t want to celebrate. The greatest gift he could receive would be his first victory in the Brazilian Grand Prix, better still at Interlagos, a racetrack which he helped redesign and which, until today, carries a corner with his name.

He went to bed early and dreamed. He dreamed that he raced alone and that he went faster and faster. He woke up smiling and went back to sleep. The dream came back dream, and now he was able to recognize the corners of the Interlagos track aboard his powerful McLaren.

In qualifying sessions, Senna witnessed the progress of the Williams team, who would present a challenge during the season with the duo Nigel Mansell and Riccardo Patrese. But he was more competent than the English team and won pole position.

He started off confidently that Sunday. He studied every move he would make during the race to win for the first time at Interlagos. He reached lap 65 with no issues.

Suddenly, the third gear disengaged. Senna then tried unsuccessfully to put it into fourth. The gearbox was broken. No, it couldn’t end like this.

He had butterflies in his stomach. Later on, he couldn’t recall if he had prayed or used bad language at the time. Signs on the pit straight informed him that he only had six laps to go, and Senna was six seconds ahead of Patrese. He took and deep breath and thought:

He drove for two more laps and saw his lead shrink to four seconds. To make matters worse, he lost fifth gear as well. This was the moment when he stopped looking at the signs and just accelerated, giving it all he could.

“I only returned to reality when I saw the finish line. Then I felt happy to be alive, to be in Interlagos, in my home land and with my happy compatriots. It wasn’t the greatest victory of my life, but one where I gave everything I had.”

Senna put forth such an effort that, exhausted, he couldn’t get out of the car. With some help, he stepped up to the highest spot on the podium and faced the crowd. It took everything he had to be able to lift up the trophy for the first time in Brazil.

“If this is the price I had to pay to win in Brazil, it was cheap. Thank you!”

What did he say after the race
“If this is the price I had to pay to win in Brazil, it was cheap. Thank you!”