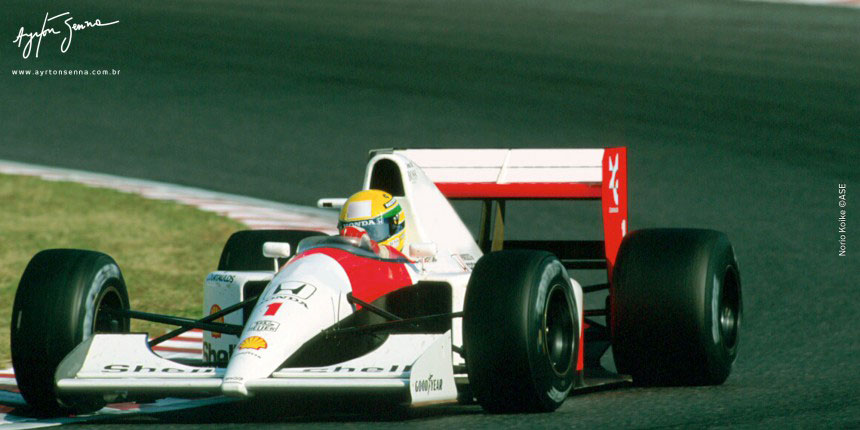 For the fifth year in a row, the result of Suzuka’s race was going to determine the season’s world champion. Ayrton Senna was directly involved in four of those contests. In 1988 and 1990 the Brazilian ended up with the title. Only in 1989 Senna wasn’t champion. And, in 1991, there was an important difference: this time, his rival was Williams’ Nigel Mansell.

Senna had six victories in the season, four of them in the first four races of the year (USA, Brazil, San Marino and Monaco). Mansell had won five races, three of them in a row (France, UK and Germany).  Ayrton Senna arrived in Japan 16 points ahead of Nigel Mansell. So even if he finished the race behind the Britton, Senna could win the championship and become a Formula 1 three-time champion before the last race, in Adelaide, Australia.

Senna managed a better position on the starting grid than the Williams driver. The McLaren cars dominated the first row, with Berger in pole position, with a time of 1min34s700, less than two tenths of a second faster than Senna. Mansell started in third.

Just like in Spain (the previous race), Senna’s tactic was to hold back and unnerve Mansell, while Berger could speed away to victory. If Berger won, even if Mansell passed Senna and finished second, the championship would be over.

At the start, all three of them kept their positions. By the 9th lap, Berger had a ten second lead over Senna, who held Mansell Back. On the 9th lap, the “Lion” gained on Senna, getting as close as possible to try to overtake him, but he overshot his approach. He pushed too hard at the circuit’s first corner and got stuck at the gravel trap. The Britton said goodbye to his chances.

The teamwork that had not worked out in the previous race produced the desired results this time: Senna knew how to deal with the pressure and held Mansell back as long as possible, making him act impulsively in search of a victory, when Berger already had a significant lead.  The Brazilian driver won his third championship exactly at the corner where Senna and Prost crashed the previous year, giving Senna that title.

“I saw the whole thing through my rear view mirror and admit that I wasn’t sad.”

“In that moment I thought, ‘yes, now I can race the way I like to: in high gear and to win’. I was focused on the title. That was the opportunity I had been waiting for. There was no better way to win the world title than that: winning the Grand Prix as I did in 1988, in Japan. And I was just about to do so when (Ron) Dennis called me on the radio. I asked him to repeat the message and, once again, I couldn’t hear it very well. Then I decided to take my foot off the gas and let Berger pass.”

The request from the McLaren principal was exactly that, to reward Berger for his effort during the race and team camaraderie. The Austrian had never won for McLaren.  The Brazilian driver hadn’t understood the message, but concluded:

“If I’d said I hadn’t understood the request, everyone would have believed it. But Berger gave a beautiful performance and deserved to win as much as I did.”

At the end of the Suzuka race, the focus was on Ayrton Senna. He had won the championship against a far superior car, bringing together talent, courage, and the maturity achieved through his years of racing experience.  He had become a Formula 1 legend.

It was such a complete triumph that Mansell waited for Senna to climb out of the car, at the end of the race, to give the Brazilian a sincere and sportsmanlike hug. At 31 years old, Ayrton Senna had just become the youngest three-time champion in the history of Formula 1.

What did he say after the race
“If I had said that I hadn’t understood the request (to allow Berger to pass) everyone would have believed it. But Berger gave a beautiful performance and deserved to win as much as I did.” 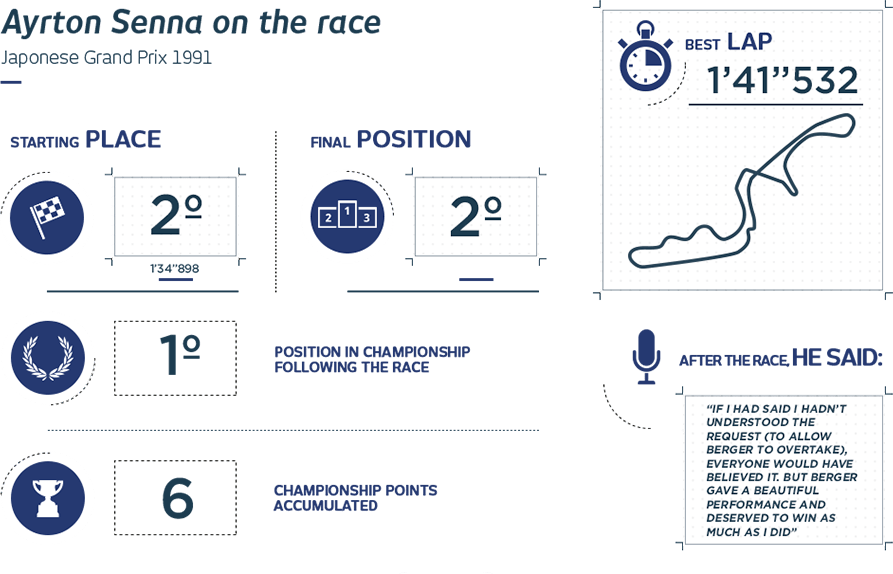