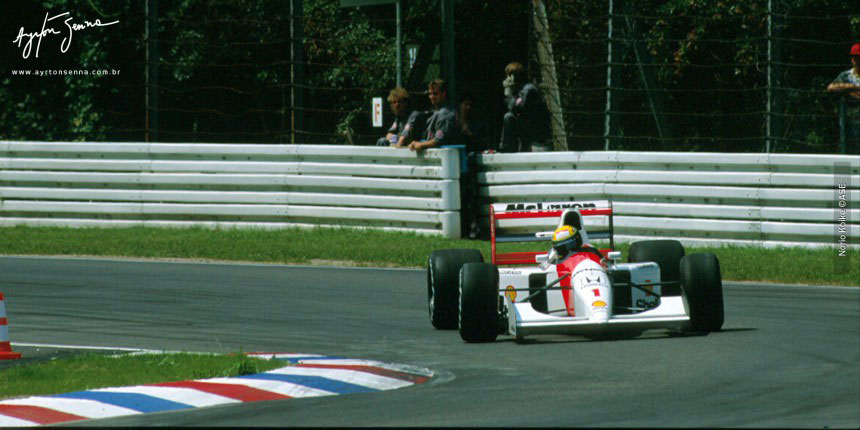 Germans were ecstatic with Michael Schumacher’s (Benetton) quick rise in F1, and tickets were 3expected to sell ou at Hockenheim. The country was still recovering from the end of the Cold war, and in need of a sports idol – especially in motor sports, considering a German driver hadn’t won an F1 race since the ‘70s.

Nigel Mansell led the tournament by a comfortable margin, with 76 points, while Riccardo Patrese, his Williams teammate, had 40. Schumacher was in third, with 29, while Gerhard Berger h ar 20 points and Senna just 18.

The Brazilian was having the most challenging season in his career, dealing with the fact that his Hond engine wasn’t the best anymore. Up until the German GP, the championship’s tenth race, Senna had climbed on the podium three times – one of them after a historic win in Monaco, the year’s sixth race. After the triumph in the Principality, Ayrton had retired three times – twice due to electronic issues and once after being hit by Schumacher.

The qualifying sessions were business as usual: in a fast track like Hockenheim, Williams had all the advantage, which kept Senna in the third row once again. Mansell secured the pole position, with a time of 1min37s960, and Patrese would start in second place. Senna posted a time of 1min39s106, while Berger was even slower, with 1min39s716, and would be starting alongside the Brazilian, in fourth. Schumacher ended up in sixth place, behind Ferrari’s French driver, Jean Alesi.

On Sunday, more than 120 thousand people showed up for the German race, which was closely contested at Hockenheim. Patrese made the first corner ahead of Mansell, but the Britton would be in the lead again by the end of the first straight. The same happened with Senna and Berger. The Austrian wasn’t able to keep the third place, and the Brazilian took it back.

Alesi had a bad start and was overtaken by both Benettons – Schumacher’s and Britton Martin Brundle’s. On lap 14, Mansell and Berger made pit-stps to change their tires. The Britton came back in third place, behind Patrese and Senna. Berger had a long pit-stop and, since tha Austrian’s McLaren was acting up, the driver ended up retiring a few laps later.

A few laps after that, Mansell caught up with Senna, but the Brazilian forced the “Lion” to make a small mistake. The Britton ran over a traffic cone on one of the corners and went straight ahead at the chicane. But, in the same lap, he was able to take the second position from McLaren. Senna didn’t like the maneuver and made a comment to journalists, after the race, about the fact that Senna ended up benefiting from cutting the corner.

“I think he should have been penalized. Not disqualified, but at minimum a 10 second penalty, because without that move, the race results would have been different.”

On lap 19, Patrese made a pit-stop and Mansell recovered the lead. That’s when Ayrton Senna’s spectacle started. The Brazili decided he wasn’t going to make a pit-stop, so that he could at least stay ahead of the Italian driver and finish in second.

To get closer to Senna, Patrese had to pass Schumacher, who fought tooth and nail for the position until being overtaken on Lap 32. Therefore, the second-placed driver in the championship had 13 laps to beat Senna and finish the race in second.

He was 6 seconds behind. But just three laps later, the Williams driver had cut it down to almost zero. Still, journalist Reginaldo Leme, who worked as a commentator in the race’s broadcast by TV Globo, believed that the Brazilian was going to be able to hold on to that spot.

“If he (Patrese) had a hard time passing Schumacher, even with his 233 GPs, against Shchumacher’s 15, just imagine what he is going to face going up against Senna, who has 1235 GPs under his belt. He is much more experienced than Schumacher. Let’s see how this fight goes down when he reaches Senna”, said the commentator.

For 8 laps, even though he was able to ride Senna’s slipstream on Hockenheim’s huge straights, Patrese wasn’t able to make his move. Senna was becoming a specialist in fending off much faster cars, in the 1992 season. The situation was even more unfavorable this time, since Patrese had much newer tires than the Brazilian.

In the chase, Patrese made three mistakes. The first took place in the same chicane Mansell ran over the cone. In his second blunder, Patrese went over the rumble strip and caught a little sand after the first corner. And, in the last lap, the Italian came out of the slipstream to try to overtake Senna, but ended up spinning out on his own just four corners away from the checkered flag.

That meant Mansell finished in first place, Senna in second and Michael Schumacher in third. Brundle crossed the finish line in fourth place and Patrese didn’t even score, since the Italian wasn’t able to take his car off the grass.

Senna’s driving in Germany became unforgettable to Livio Oricchio, a Globoesporte.com journalist, who told Senna TV that it was one of the Brazilian driver’s most amazing races. “One of his races that I have never forgotten was in Hockenheim, in 1992”. Watch Livio’s full interview.

In the championship, Mansell took off with 86 points. Patrese stayed put with 40. Schumacher now had 33 and Senna passed Berger. The Brazilian reached 24 points, against the Austrian’s 20. Ayrton Senna’s next driving masterclass was already scheduled: Hungaroring, three weeks later.

What did he say after the race
“I knew the risks, but it was my only chance at coming in second. Unfortunately, it was the best I could do.” 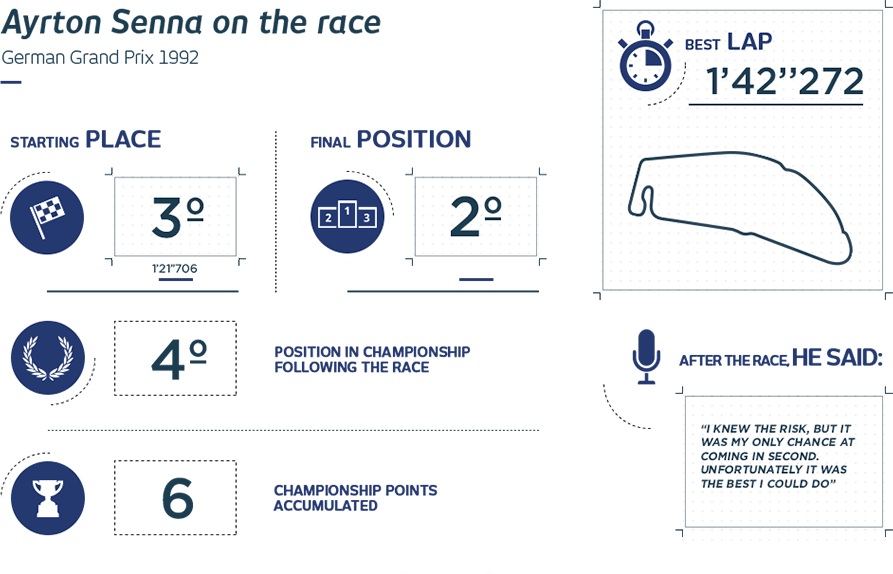