When Formula One arrived in Belgium, its champion was already known. Driving an infinitely superior Williams, Nigel Mansell didn’t give his adversaries a chance, that year (but he could only watch as Senna won the race in which he secured his title, in Hungary, two weekes before the Belgian Grand Prix).
One week before the race in Spa-Francorchamps, Ayrton Senna had a long meeting with Niki Lauda to set up his move to Ferrari. It didn’t go well.

“Lauda was sorry to say that he couldn’t promise me a victorious car for 1993. He guaranteed that I’d be a god on the team, but he could only foresee me winning the championship in 1994.”

So, Senna gave up on the idea of racing for the Italian team.

It was a busy weekend, in Belgium. During the free practice sessions, an accident involving Frenchman Éric Comas turned out to be as memorable as his own race, on Sunday. The Ligier driver cashed hard at the Blanchimont corner, one of the several high-speed stretches throughout the course. The engine of the car stayed on, with the driver passed out after hitting the tire wall. Ayrton Senna stopped his McLaren, sprinted towards the Ligier and turned its engine off, saving his colleague’s life, who was promptly treated by rescuers.

In Saturday’s qualifying round, Ayrton had the second-best time, which meant he would start next to Nigel Mansell on the first row. The second row had Micahel Schumacher with his Bennetton and Ricardo Patrese, the Britton’s teammate at Williams.

As the driver with the most wins in Belgium, back then, Senna had four victories in row at Spa-Francorchamps: 1988, 1989, 1990 and 1991. Despite starting o the first row, he knew he wouldn’t be able to compete with the Williams, under normal conditions, in an extremely fast circuit.

On the demanding Belgian circuit – which he loved so much – Ayrton led using slick and wet tires. He started the race by taking the lead while the track was still dry, soon after the first corner. Later, he was overtaken by Mansell and Patrese, who then changed their tires for wet ones, putting the Brazilian ahead of the field once again.

McLaren, was aware that they could end up winning if their strategy was different from their rivals’. So, they decided to keep Ayrton on the track. The plan could only work if the rain stopped soonm which didn’t happen. By missing his pit-stop window, Ayrton lost a lot of time to his competitors, who had already stopped and were much faster than him.

On lap 14, when McLAaen finally called him to the boxes, the race was completely compromised. The Brazilian came back in 14th place, and had to make another spectacular recovery.

Later, on lap 30, when the asphalt started to dry up again, Schumacher made a mistake that would end up ensuring his victory. He spun out on his own and had to make a pit stop. Benetton decided to bet on new slick tire compounds, which proved vital in making sure the German finished the race. Neither McLaren nor Williams acted as fast – and both paid by wasting time and being slower than the German on the track.

Thanks to that strategy, t Michael Schumacher (Benetton) celebrated a victory in F1 for the first time. Masnell and Patrese rounded out the podium one year after the German’s debut, which had happened in Belgium, in 1991, as a Jordan driver. Martin Brundle, the German’s teammate, finished in fourth. Senna completed the race in fifth, followed by Lotus’ Mika Hakkinen.

Taking the beginning of the weekend into account, Ayrton’s two points in Belgium paled in comparison to the driver’s act of courage in helping a colleague in distress.

What did he say after the race
“Lauda was sorry to say that he couldn’t promise me a victorious car for 1993. He guaranteed that I’d be a god on the team, but he could only foresee me winning the championship in 1994.” (on negotiations with Ferrari) 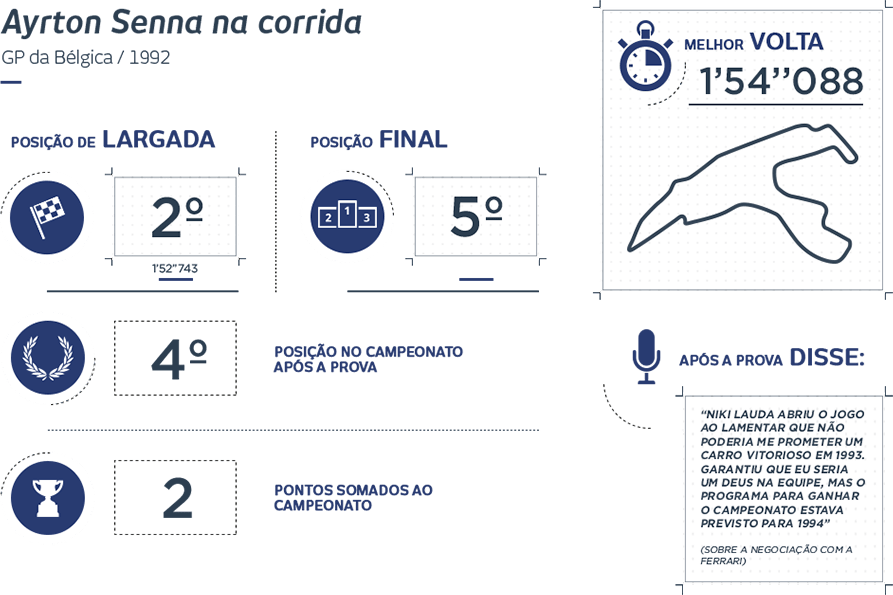