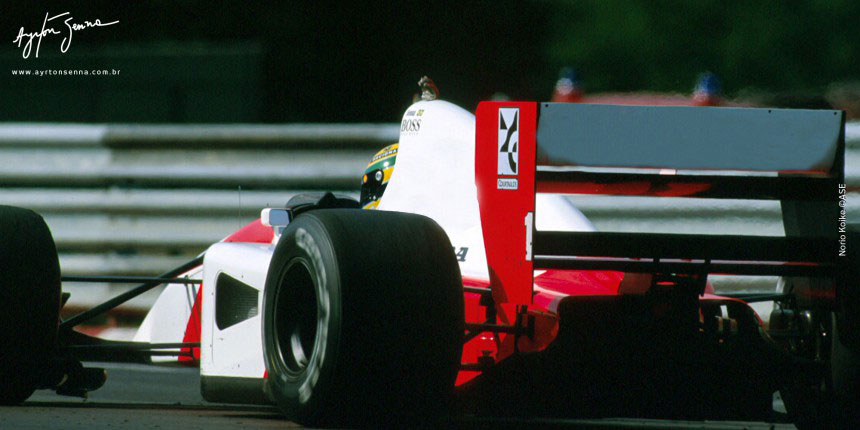 After a hard-earned second place at the German Grand Prix, breaking an unusual streak of three races outside of the top-three, Senna wanted to use the tight Hungarian circuit to his favor, being that the Williams` cars were notoriously faster. Nigel Mansell had the best chance so far in his career of nabbing his first world title. The Britton led the championship with 86 points, and he didn`t even had to win to secure his greatest goal that season. In Budapest, Senna tried to adjust the car to get better grip and traction. The Brazilian angled the rear wing as much as he could in order to gain aerodynamic pressure and be faster on the corners. He did that since the first time trials, aiming to secure a good starting position in a track where it is difficult to overtake. On Saturday, he actually did better than on Friday, but not enough to start ahead of the Williams: he came in third for the starting grid during the qualifying. If he started strongly, he would have a chance. The only novelty was Patrese setting the best time in front of Nigel Mansell. Ayrton wasn`t confident he could beat the Williams the following day. Before the race, he talked about the rival team`s excellent traction system, a weapon that could prove vital in allowing Mansell and Patrese to keep their positions after the first corner. Williams has developed a traction control and gear-shifting system that always delivers a strong start for their drivers. The only way they won’t be in first and second place at the end of the pit-lane straight is if they both make grotesque mistakes”, said Ayrton to reporters after the deciding qualifying round. On Sunday, soon into the first lap, Senna passed Mansell and came up behind Patrese. The “Lion” didn’t made any clear mistake, it was all due to the Brazilian’s daring strategy – he braked late and stayed on the outside of the first corner, with a shot of coming out with right of way on the corner’s second half. It was such a good tactic that Berger, driving the other McLaren, took advantage of it and finished the first lap ahead of the Britton. Soon after, Mansell reclaimed the third place and caught up with Ayrton. Even under intense pressure from the Britton throughout the next several laps, he kept his pace, sparing his tires. He described the situation after the race:

On lap 31, the same story from so many other races repeated itself: a heated dispute between Mansell and Senna, with the Britton trying to overtake. But the “Lion” made a mistake: he went wide on a corner and saw Berger steal his position once again. The Britton managed to take the third place back a couple laps later. As the unchallenged leader, 25 seconds ahead of Ayrton, Patrese made the mistake the Brazilian was waiting for: the Italian spun out on his own, got his two rear wheels stuck in the sand and was only able to come back after the marshalls pushed his car. By then, it was already too late for the Williams driver, who came back in seventh place. A few laps later, his Reanault engine blew-up, taking him out of the race for good. With the race coming to a close, and with his title secure if he finished in second place, Mansell started making a safe race and Ayrton took off in the lead.

“After everything I had done to get to that point, the only way the Lion could pass me was to go through me. Inside or outside wasn’t going to happen.”

Senna and Mansell dominated the race so thoroughly that both finished ahead of the rest even after making a pit-stop, unlike every other driver in the top six. The Brazilian crossed the finish line 40 seconds before the Britton, who won the 1992 title very early in the season. Berger was in third. It was the second time Senna climbed to the podium in the season. His other win had been in Monaco, where he also withstood Mansell’s pressure. At the endo of the Hungaroring race, the MCLaren driver confessed again that he wasn’t expecting a win in Budapest, which made the 35th victory in his career even more gratifying. “Their suspension generates a lot of grip on the corners, which allows them to go that much faster”, explained Senna. “What matters is that we scored another win in an extremely difficult year”, added Senna to reporters.

What did he say after the race
“After everything I had done to get to that point, the only way the Lion could pass was to go through me. Inside or outside wasn’t going to happen.” 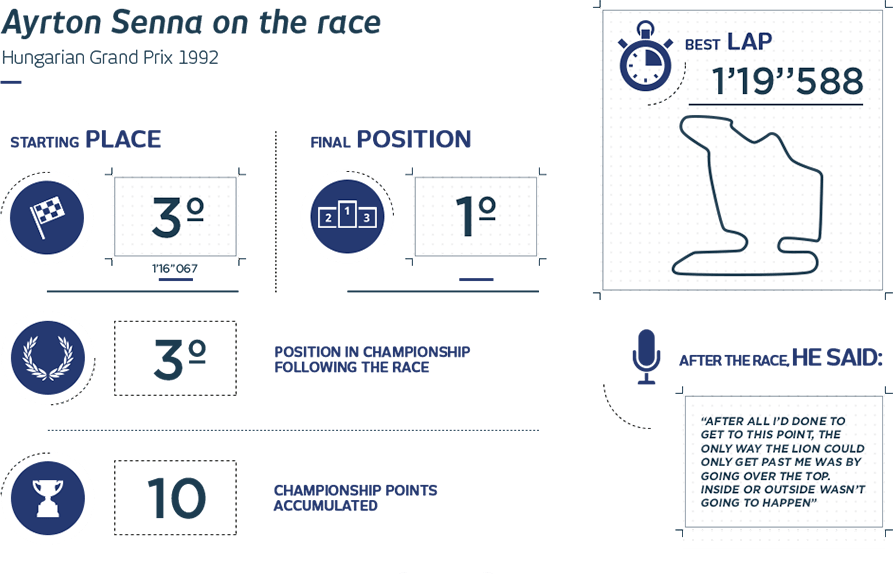