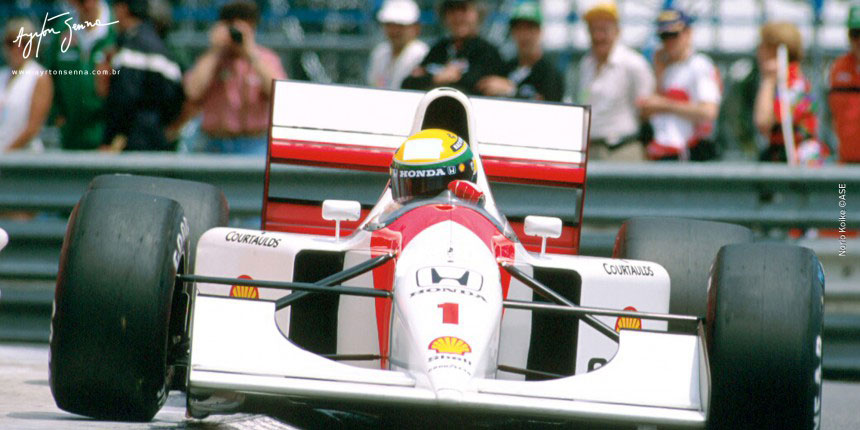 Problems continued on in Monaco. Nigel Mansell had won every race, starting at the pole-position, and Ayrton Senna, as hard as he tried, couldn’t keep up with the Williams at the free practice and qualifying sessions. With his FW14b “from out of this world” the Briton scored an incredible 1min19s495 lap, 1s1 faster than Ayrton, who started the race in third.

Senna wasn’t thrilled with his position, but he had a plan to beat Patrese at the start and, calling upon his experience of having four prior victories on the Monte Carlo circuit, put pressure on Mansell.

His strategy was to start strong and jump ahead of Patrese. Despite starting in third place, he had the advantage of being on the inside on the track’s first corner, the Saint Devote. At the green light, the Brazilian put his plan into practice: even without a great start he managed to overtake the Williams’ Italian driver thanks to his positioning on the track.

“To be honest, I could have passed Mansell as well at the braking point. I lacked the nerve. I never thought they would brake so early into the corner, so I only tried to pass Patrese.”

After that, Senna showed two distinctive sides during the race. At the beginning, he held back enough to be able to save his tires, which could potentially make a difference on the Monaco circuit. He drove the car with extreme caution.

“I screamed at myself: pay attention, concentrate, don’t get distracted, you idiot!”

Ayrton only became anxious when he encountered Michele Alboreto’s Footwork on the Mirabeau corner. The Brazilian had to try hard to keep Mansell from widening an already significant gap. He stopped and put the car in first gear, which cost him 10 seconds. Thankfully he was ahead enough of Patrese to hold on to the second position.

At the end, one of the most special tracks in Ayrton Senna’s career held another surprise – as it often happens in F1 Gran Prixes.

Another Mansell win was all but certain. However, things changed when a nut became loose in one of his wheels. That made him slow down dramatically and make a pit-stop to change his tires. The issue put Senna in the lead, and made him think: “Now, I’m going to race to win.”

The last few laps were the most exciting in Monaco’s history, with a spectacular finish. The Brazilian driver had to use his McLaren to hold back a much superior Williams equipped with new tires. Senna had to cut him off, change paths and do the impossible, all the while with Mansell glued to his rear-wing, managing to show up “on both of his rearview mirrors”, as the Brazilian would later say.

Senna was able to overcome the pressure and win at the Principality for the fifth time, equaling Graham Hill’s 22-year-old record. Riccardo Patrese finished in third, Michael Schumacher in fourth, Martin Brundle in fifth and Bertrand Gachot, driving a humble Larrousse, was the last to score any points.

“I was heartened by my fifth win in Monaco, but this car is still quite inferior to those of Williams”, said Senna. “The car was better at the race than at the qualifying sessions, but not enough to beat Nigel. So, I tried to keep as close as possible, because this track is very unpredictable, and I wanted to be in position to take advantage of that, as it ended up happening. When I took the lead my tires were very worn-out, and I expected Nigel, who had new tires, to catch up to me very quickly, even though I didn’t know how I would keep the lead. I had to use all my knowledge about Monaco, and it was really exciting. I knew Nigel was going to try everything to pass me, and he was faster everywhere in the circuit. So, I tried to stay inside the track and at the right place. At the straights, the car felt like a dragster, with the tires spinning in place on second, third and fourth gears. But I won anyway. It felt good to tame the Lion.”

What did he say after the race
“I revived things with my fifth win in Monaco, however, this car is still quite inferior to Williams’ car. But it made me feel good to tame the Lion.” 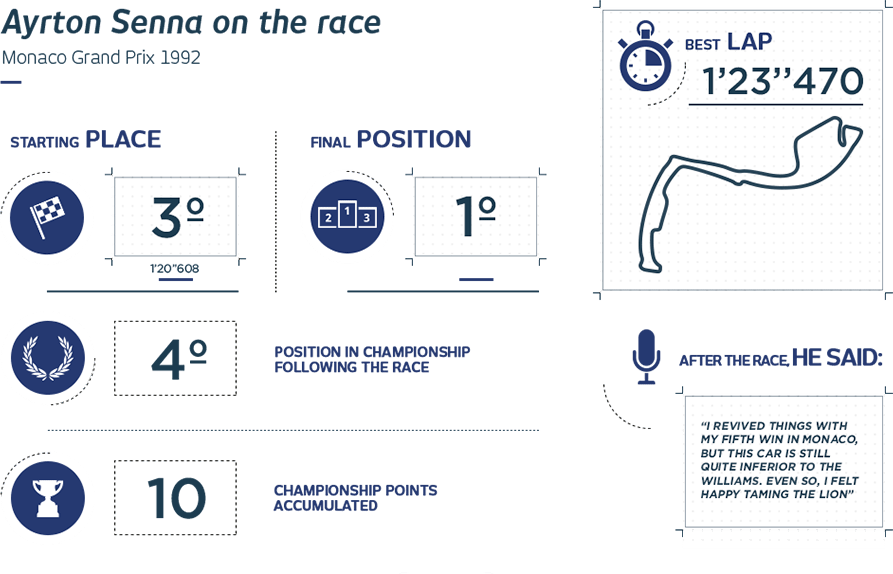