The majestic duels between Senna and Prost had returned to Formula 1. After the French driver’s absence during the 1992 season, he was back behind the wheel of a Williams, once again with a competitive for the season. Senna was beginning his final season with McLaren, now equipped with a Ford-Cosworth engine, after the end of the partnership with Honda.

During his off-season vacations, Ayrton Senna took the time to ponder his future in motor racing. The driver even tested a Penske Indy racecar, in Arizona, invited by Emerson Fittipaldi. The three-time champion also thought about taking a sabbatical year, just like Prost had just done, but his love for competing in Formula One spoke the loudest.

All eyes were on Prost and Ayrton, during the qualifying sessions for the South African Grand Prix, which would be opening the F1 season for the second consecutive year. Alain Prost took the pole position with a time of 1min15s696, only 0s088 faster than the Brazilian. Michael Schumacher would be starting in 3rd place with his Benetton, and Damon Hill – making his Williams debut – took the 4th spot.

At the start, Senna jumped ahead, followed by Hill and Prost. Prost took a while to get going, and was almost also overtaken by Schumacher. Still in the beginning of first lap, Hill spun out on his own and ended up facing the oncoming traffic. Nothing serious happened, and Schumacher took advantage of the accident, overtaking Prost, who had to make a maneuver to keep from hitting Damon Hill.

As the next few laps went by, Senna, Schumacher and Prost peeled away from the rest of the pack. On lap 13, the Frenchman finally passed the German in a bold move from the outside. Now, the duel was between both three-time champions at the time. Prost tried to overtake Senna several times at the same place where he had left Schumacher behind, but the McLaren driver always blocked his way.

After both leaders had completed 25 laps, the pressure got to Ayrton. Prost took the lead, followed by Schumacher. The McLaren was losing performance, and the Brazilian was called to the pit box. It was a sound strategy, and the Brazilian returned in 2nd place.  However, his McLaren presented problems, and the car’s performance kept declining.

The German hadn’t given up the 2nd place, and, with a more powerful engine, tried to jump ahead in the 40th lap, only to be cut off by Senna. Schumacher ended up spinning out after his left front wheel touched the Brazilian’s right rear one. The Benetton driver was forced to retire, and Senna had a clear path to a 2nd place finish.

On lap 69, rain started pouring on the Kyalami circuit, leading to several retirements. Unfortunately, for Ayrton, it started raining when there were only three laps left, and he was unable to reach his rival. The Williams dominance was so evident that only Ayrton was able to finish the race in the same lap as the winner. Prost won upon his F1 comeback, while also posting the quickest lap in the race: 1min19s492.

Second place wasn’t so bad, after all. Aside from problems during the race, his new Ford engine was weaker than Renault-Williams’. Additionally, the new McLaren had yet to be tested thoroughly.

he South African Grand Prix marked two firsts for Brazil: Christian Fittipaldi (Minardi) finished in a strong fourth – his best result ever in F1 – and Rubens Barrichello (Jordan) had his Formula 1 debut.

What did he say after the race
“It was a very interesting race up until the car became undrivable.” (FORIX) 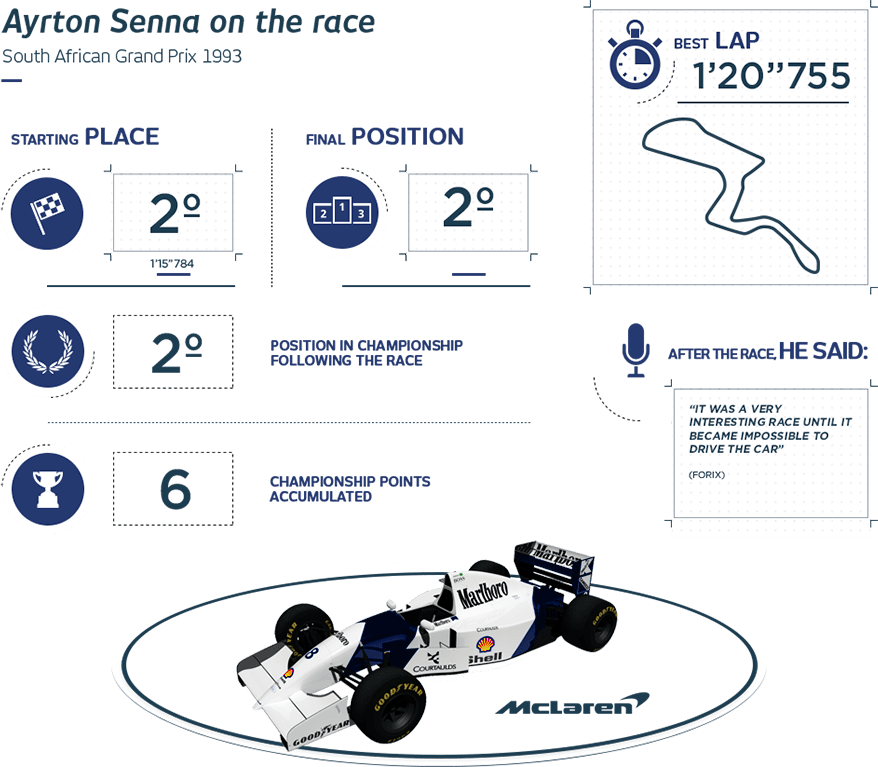