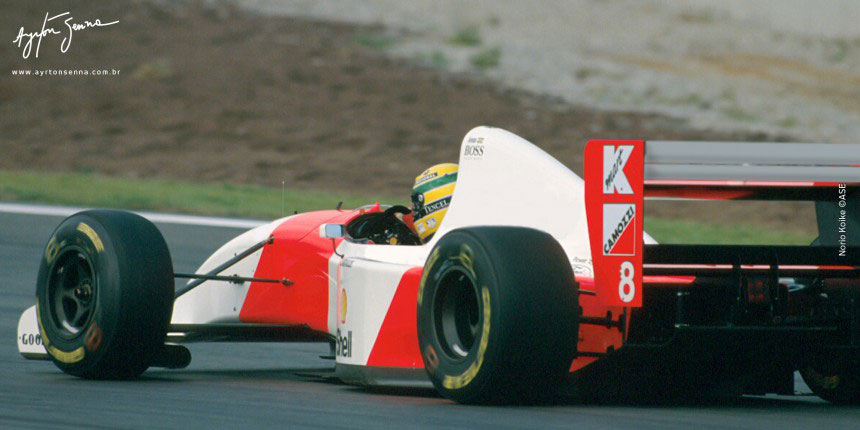 Ayrton Senna was not happy with his engine’s performance and arrived in Spain criticizing Ford. He couldn’t understand why he was getting engines up to 80cvs less powerful than those provided Benetton.

“I hope that they realize that they are undermining my chances to win.”

The Spanish GP was the season’s fifth race. Up until then, Alain Prost had two wins under “regular” conditions and Ayrton Senna had finished first in totally exceptional occasions, in which the Brazilian driver made history: Interlagos and Donington Park.

During the qualifying rounds, Ayrton secured the best possible position in a season completely dominated by Williams. He would start in third place, after being 0s798 quicker than Michael Schumacher – it was the German’s Benetton that was getting Ford’s best engines. No surprises on the first row: it would be shared by both Williams, driven by Alain Prost and Damon Hill, who seemed unbeatable at the Catalan racetrack.

At the start, Senna held on to third place and wasn’t threatened by Schumacher’s Benetton in the race’s first half. Ahead of him, Hill overtook Prost for the lead even before the first corner.

The Frenchman would take the lead back in the 11th lap, when Hill didn’t put up a fight with his teammate. Throughout the following laps, the future four-time champion secured a comfortable lead.

The race became a little tedious. Senna was almost 10 seconds ahead of Schumacher, who was having trouble keeping up with the McLaren. Meanwhile, Hill could only get closer to Prost when the Frenchman was held back trying to overtake backmarkers.

The Britton tried to overtake a few times, but, right when he seemed to have the upper hand in the race, on lap 41, he was let down his William’s Renault engine. Hill even managed to take his car to the boxes, but there was little his team could do and he was forced to retire.

That meant Ayrton Senna was in second and Schumacher in third, with Patrese in fourth. There was also an unusual presence in the points-scoring zone: American Michael Andretti, in fifth, who was doing his best F1 race so far, behind the wheel of a McLaren.

Senna’s only hope to get closer to Prost was skipping the pit-stop to change tires. The Frenchman didn’t have to take chances and, with a new set of tires, kept going fast until the race’s 65 laps were over. Senna finished in second, 16s8 after his rival. The podium was rounded out by Schumacher who, even after spinning out at the end of the race, finished in third.

Patrese and Andretti kept their positions, and Gerhard Berger (Ferrari) was the final driver to score points in Spain.

The results put Prost at the top of the standings. The Williams driver had 34 points to Senna’s 32 and Schumacher’s meager 14. That podium was shared by F1 legends, who would end up with 14 world titles, in total.

The English newspaper, Motoring News, summed up the race:

“Alain Prost has adopted the practice of minimum effort. He started poorly and wasted ten laps to overtake Damon Hill – who facilitated – and imposed himself over those poor drivers who did not have a Williams. It wasn’t pretty, but he won. That’s all.”

What did he say after the race
“I hope that they realize that they are undermining my chances to win.” (on the Ford supplier passing over McLaren, offering their best engines only to Benetton) 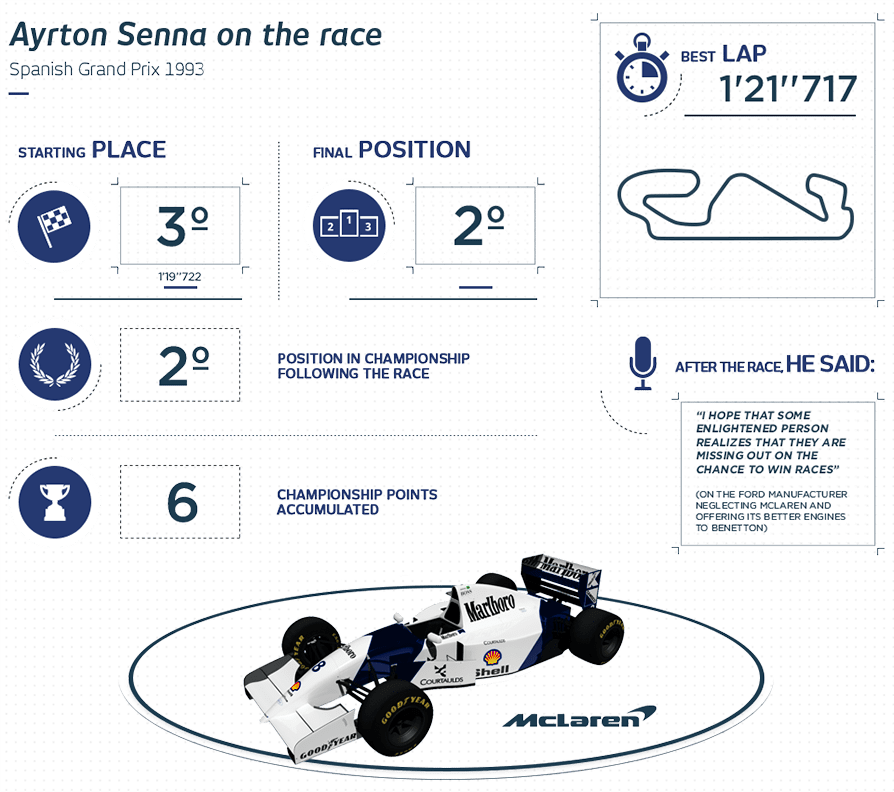