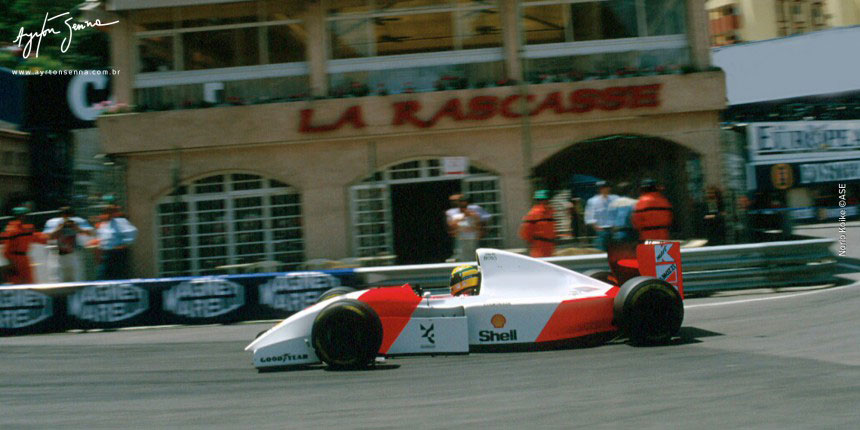 “Racing in Monaco is always different. The narrow streets are a constant challenge to drivers. You have to scrape the guard-rails with your tires to be fast. You can’t lose focus for even a second. Anyway, it’s a big challenge for drivers. Personally, I like racing here a lot. I was the first Brazilian to win in Monaco, and I did it in the last four races. It’s a great feeling, one that I’d like to recapture this year”, said Senna in an interview with the Brazilian press at the start of the Monaco GP week.

Despite the confidence before practice sessions began, the Brazilian knew that he had an even harder mission, that year, particularly because of the Williams good performance. During the first free practice session, which takes place on Thursday, at the Principality, Senna dislocated his left thumb, which ended up hurting his results: he had only the fifth best time, after crashing his McLaren against the guard-rail.

“Here’s what happened: I had completed just six laps, the track was dry and the car was performing well. At the end of the pit-lane straight, I was full-speed ahead, on sixth gear, at almost 170 mph, and the car’s rear-end touched the ground when passing a bump. I feel like my rear wheels left the ground, my car spun 90 degrees right and hit a guard-rail. It was a hard impact. Then, it ricocheted and hit the other side of the track, and then again, on the right side. I had three head-on collisions at maximum speed because at the pace I was going, it was impossible to brake. I was crashed while I was gaining speed, almost”, said the driver in an interview to Brazilian journalists.

During the free-practice sessions, the team’s physical-therapist, Austrian Joseph Leberer, applied ice, massaged and applied cortisone-based ointments, to reduce swelling in Senna’s thumb. Ayrton was going to give his all to recover for the session that would determine his place on the starting grid, on Saturday.

Senna did better in the qualifying session. Even after spinning at the exist of the tunnel, he ended up in third place. The first row belonged to Alain Prost, who had the pole-position and Michael Schumacher (Benetton). Damon Hill was going to share the second row with Senna until they all started the 78-lap race in Monte Carlo.

Before the race, the press warned Damon Hill that Ayrton Senna could win for the sixth time and take his father’s (Graham Hill) crown as “King of Monaco” – both having had five wins in Monte Carlo. The Williams driver just listened. He certainly didn’t think that a 24-year old record was going to be broken right in front of him. After all, the Brazilian was starting in third place and had a tough task ahead of him.

At the start, Senna kept his position, as did the rest of the front pack. Officials determined that Prost had had a false start, and the Frenchman was penalized with a 10-second stop. His bad luck continued at the exit of the pit-lane. His Williams’ engine gave out, and he only managed to make a pit-stop after being lapped by Schumacher, now in the lead.

The German pulled away from Senna, who was clearly not pushing his car too hard since a second place finish was enough to put him at the top of the overall standings.

In the 33rd lap, Schumacher’s Ford engine had a hydraulic system malfunction, ceding the lead to Senna. The three-time champion was 16 seconds ahead of Damon Hill and took the chance to step on it and pull away even further, changing tires for the second time in the 51st lap.

Ayrton came back to track still in the first place and, thanks to the crash between Hill and Berger on lap 70, he crossed the finish line 52 seconds ahead of the Britton. Berger ended up retiring because of the collision, and the podium was rounded out by Ferrari’s Jean Alesi.

At the end of the race, Senna made sure to say it was especially good to overtake Prost twice, besides finishing way ahead of his rival. The Frenchman took advantage of his competitors’ problems and finished in fourth place. Christian Fittipaldi finished in an excellent fifth place with his Minardi, and Martin Brundle rounded out the point-scoring zone, in sixth.

“I even went a little faster to avoid surprises.”

On the podium, Ayrton Senna was pleased with Damon Hill’s (second place) elegance, who said to him:

“Congratulations, King of Monaco. If my father were alive, he certainly would come to congratulate you.”

It was Senna’s 39th win, and his third in the 1993 season, which seemed unlikely in a year dominated by Williams – and which explains in part why so many experts pint this year as Senna’s peak in performance, even if he didn’t win the season. After the Monaco Grand Prix, however, he was the championship leader, with 42 points to Prost’s 37.

What did he say after the race
“I even went a little faster to avoid surprises.” (after passing Prost and gaining a one-lap lead) 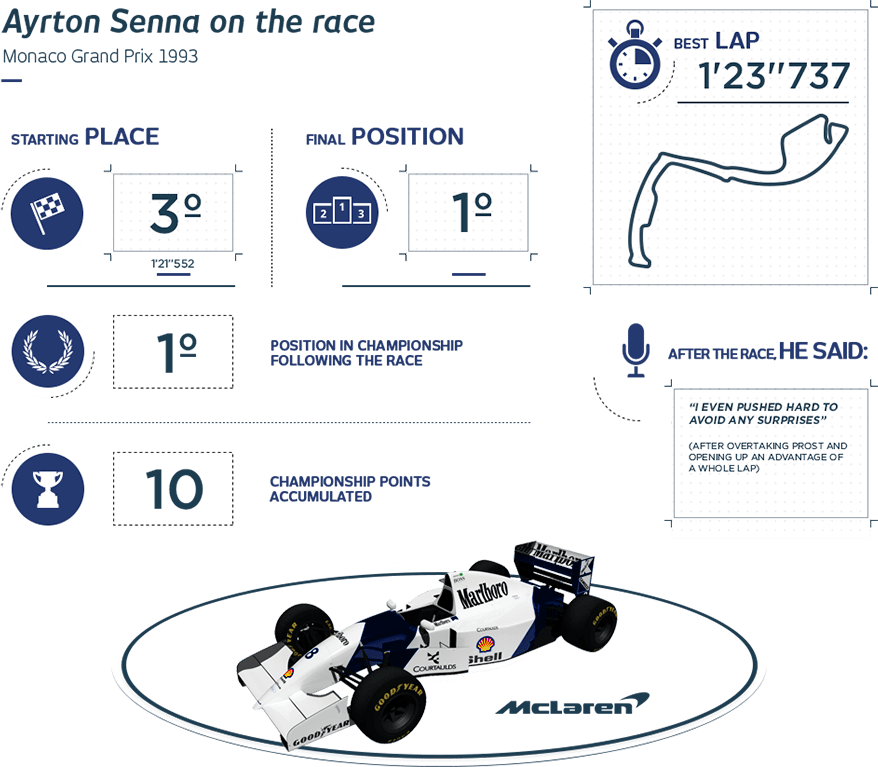