Ayrton Senna’s participation in the Brazilian Grand Prix was almost compromised due to misunderstandings concerning the signing of his contract with McLaren. To the team’s good fortune, the matter was settled.

“If it’s written in the stars, no one can change it.”

Senna had a difficult mission that weekend. Qualifying sessions had highlighted the superiority of the Williams cars. Alain Prost and Damon Hill came in almost two seconds ahead of the McLaren driver, who would start in third.

Brazilians hoped for a turnaround: a strong rainstorm was on its way. With the rain, Senna’s chances against the force of the Williams cars would increase.

With all the rain that fell on Interlagos that year, anything and everything happened: nine accidents, three collisions (one of them between Alain Prost and Christian Fittipaldi), changing from wet tires to slick tires and the debut of the Pace car (for eight laps) after it was officially instituted at F1.

Senna suffered a penalty for a risky move he made and lost more than 10 seconds in the boxes. When the rain stopped and the track began to dry, Senna passed Damon Hill and took his McLaren to the finish line.

But not without praying that the engine not go out on the final laps, when the oil pressure light on the panel came on. The car broke down 50 meters (160 ft) past the finish line.

The other drivers stopped as well, to watch the Brazilian fans celebrating, as they had completely invaded the circuit’s track. Senna’s last celebration at home.

What did he say after the race
“If it’s written in the stars, no one can change it.” (upon winning race in which he faced both car and track challenges) 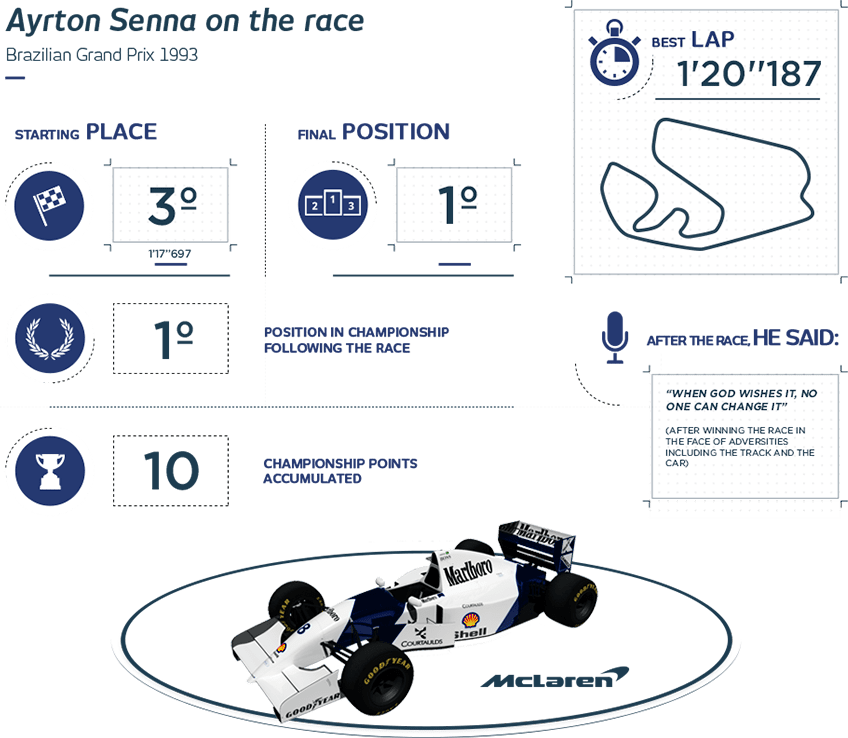