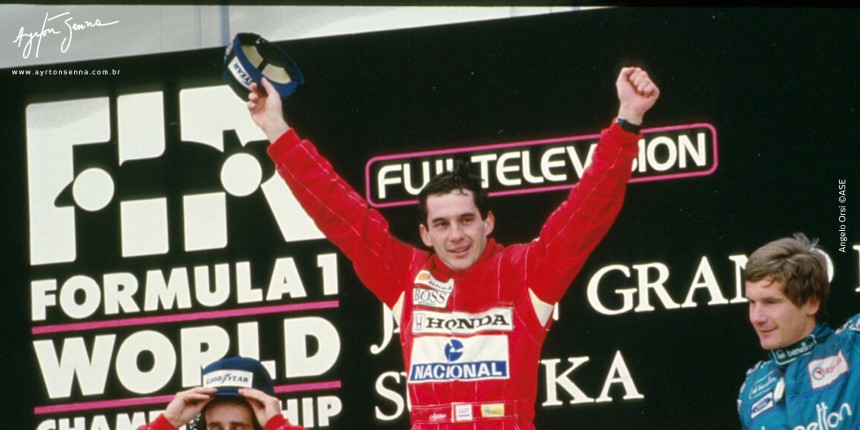 From an early age, Ayrton Senna looked for victory. He won titles in every category he passed through before reaching the Formula 1. After his first victories however, he lacked a good competitive sequence that could put him in direct contention for the top of the driver’s standings.

This was the how Ayrton Senna arrived at McLaren in 1988, with the experienced and until then, two-time champion Alain Prost, as team mate.

The first title happened in that same year after an epic win in the Japanese Grand Prix, when he recovered from an engine failure that left him in sixteenth position right at the start. One by one, his opponents were overtaken.

The second title could have happened in 1989 but he was disqualified after taking the checkered flag in first place in the Japanese Grand Prix. That victory was not to be and the title went to Alain Prost, who retired after colliding with the Brazilian and forcing him to make a maneuver to return to the track that resulted in Senna’s penalization.

The showdown came in 1990 when both collided in the first curve of the Suzuka circuit with the advantage to the Brazilian, who only needed to finish ahead of the Frenchman. The two-time championship was widely hailed even though the principle players weren’t on the track.

In 1991, the third championship came after much competition from the fast cars from Williams. Even given his McLaren disadvantage at the end of the season, Ayrton Senna raised the trophy once more in Japan after Nigel Mansell, pressured by the need to pass the Brazilian, retired from the race.

The three undisputed titles, remembered until today as great moments in auto racing, gave Ayrton Senna a firm place among the greatest sportsmen in history.