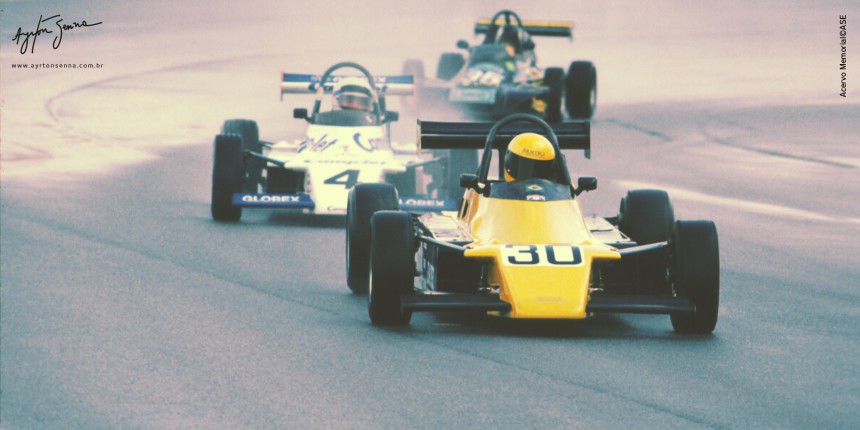 After consulting with his family and refusing an invitation to race in Formula Ford in 1980, Ayrton Senna decided to enter the category in the following year. The Brazilian driver arrived in England to make his debut as a Formula Ford 1600 driver and race for the best team in the European Championship, Van Diemen – the same one that had welcomed Emerson Fittipaldi in the late ‘60s. It was time for Ayrton to show everything he had learned in go-kart tracks around the world.

In his first year, he competed in 20 races in three competitions (Towsend Thoresen, EFDA Euroseries and RAC British), winning 12 of them. The Brazilian’s first triumph took place at Brands Hatch, on March 15th, 1981, the same place where he made his debut two weeks prior.

Ayrton Senna’s first trophy ever as a Formula driver can be found in Snetterton, England, in possession of team principal Ralph Firman, who commanded a team of Latin-Americans – besides de Brazilian, he also had Argentine Enrique Mansilla and Mexican Alfons Toledano in his roster.

The car driven by Ayrton in 1981 had 125 bhp, was equipped with a “Kent” Ford engine and, without aerodynamic wings, it had a lot less grip than the go-karts with which the Brazilian was used to. All competitors had similar cars, so that the driver could make the difference – as Senna Certainly did.

During his Formula Ford stint, the young driver – he was 20 years-old when he arrived in Europe – was mentored by Chico Serra, who was starting his F1 career at the time, and would later make history in Stock Car, the foremost category in Brazilian motor sports.

In the 1982 season, Ayrton took the natural step towards in an international motor racing career: he went to Formula Ford 2000.

During the break between the 1981 and 1982 championships, Senna had personal problems and considered ending his career. But as soon as he sat down inside the car – which was, on average, four seconds faster than the previous year’s, all his doubts were gone.

This time, racing in the British and in the European championships, Senna broke all possible records in both competitions. He scored the so-called grand chelem in the season’s first six races: the pole position, a victory from start to finish and the quickest lap.

On September 12, he set another unbreakable record, winning for the ninth time in a row in the category – a feat that remains unequalled to this day.

In 1982, Ayrton competed in other European tracks, such as Zolder (Belgium). Hockenheim (Germany), Zandvoort (the Netherlands), Osterreichring (Austria), Jyllandsring (Denmark), Mndello Park (Ireland), besides the more traditional ones where he had raced in the previous years.

With his amazing results, Ayrton da Silva – as he was affectionately called at the beginning of his career, in the UK – was being courted by Formula One teams. He decided, however, to stay on the path travelled by most of the sports’ greatest names: he signed on to race in the British F3, in 1983.