Even back then, Ayrton Senna already was perfectionist. Whenever he would come back from practice, late in the afternoon, he would insist on taking the entire go kart apart, cleaning and inspecting each and every piece.

It didn’t matter how long it took. He would work in his garage until the wee hours and would only rest once the work had been done.

Senna took part in several competitions in 1975, and he finished as the runner-up in one of the most important of them: the Youth Category of the Brazilian Championship, contested in Rolandia, in the state of Paraná.

At 15, the young driver won the most prestigious title in the entry category of Brazilian motor sports: the São Paulo Go-Kart Championship, which had recently started being covered by the media, since, at the time, motor sports were on the rise, in Brazil, thanks to Emerson Fittipaldi’s two F1 world titles (1972 and 1974) and to the country’s debut in the official F1 calendar, with the Brazilian Grand Prix (since 1973).

In a competition made up of ten rounds spread out throughout the year (a system very similar to the one used in Formula One), Ayrton won the São Paulo Championship by scoring five victories and three second-place finishes.

The 1975 season also brought other important go-kart titles to Ayrton Senna: he won two editions of the Canovas Tournament, the Go-Kart 50 Miles, a Summer Torunament and the Itacolomy National Tournament. 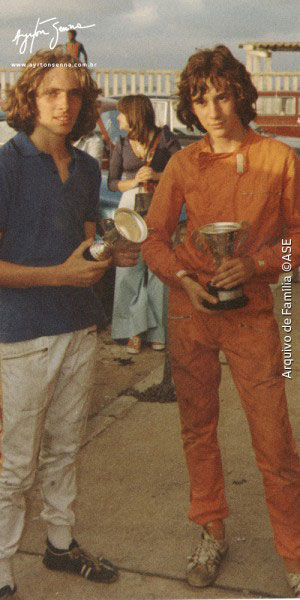