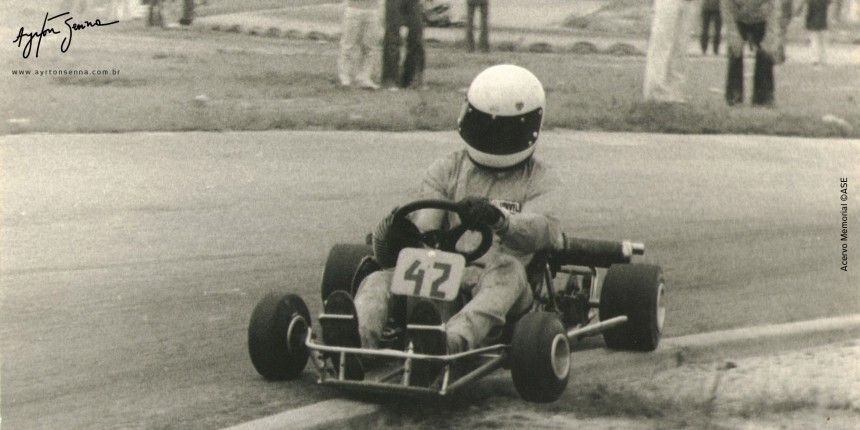 Senna’s 1976 season was marked by a special achievement: the São Paulo 3 Hours of Karting, contested at the Interlagos Go-Kart Track. Ayrton and Mário Sérgio de Carvalho took turns driving the #22 go-kart, but a victory by the team wasn’t considered very likely, since the competition featured other, more well-known duos: Chico Serra and Dyonisio Pastore; Walter Travaglini and Antônio Estellise, and Antônio Lopes and Affonso Giaffone.

At only 16, in a time when drivers didn’t start their careers as early as they do nowadays, Senna was in the 2nd category, 100cc. But, even though he was younger, he faced the more experienced drivers of the 1st category head on. The race had more than 180 laps, and Mário Sérgio and Ayrton captured everyone’s attention since the very start.

Driving a mini SS-Parilla for team Rheem, Mário Sérgio and Ayrton started the race fighting for fourth place. After seven laps, they were in second place and, on lap 39, the duo managed to take away the lead from Chico Serra and Dyonisio Pastore. After that, they dominated the race until receiving the checkered flag, on lap 182.

“Newcomers shined bright” was the headline of Gazeta Esportiva, the main Brazilian sports newspaper at the time. The race was one the most talked about in the country’s karting circles, and its trophy was awarded at the Grand Hall of Pacaembu Stadium, by Caio Pompeu de Toledo, then the city’s Sports Secretary.

In the Brazilian Go-kart Championship, which took place at the Maqui-Mundi racetrack, in Rio de Janeiro, Senna competed once again in the 2nd Category 100c. The driver from São Paulo scored the pole position with a time of 56s77 and jumped ahead of the competition during the first heat. Senna’s main adversary would be Rio de Janeiro-born Luiz Eduardo Lassance.

Right after the start, both drivers peeled away from the rest of the field. According to an Autoesporte Magazine article, Ayrton had hard rear tires, since his daring driving style would wear out soft tires too quickly. Lassance was the opposite, with a cleaner pace and a classic driving style.

Worried with a water puddle on the Hairpin, Ayrton avoided the stretch – which was where Lassance saw the opportunity to pass him and ended up winning the race. Senna finished second.

Before the second heat, Ayrton asked the race officials to clean up the corner. At the start, he got more traction than Lassance and took the lead. Believeing the stretch would be better, Ayrton followed the same path on the Hairpin, but Lassance was able to once again jump ahead. Right after that, Senna tried to retake the lead, but he bumped against his rival and ended up spinning out. The second heat winner was Emanuel de Brito, who defeated Lassance. In the final standings, Lassance finished on top, followed by Emanuel and the Senna.

“Dudu earned that title”, said Ayrton. “I was immature. If I had driven over that puddle he wouldn’t be able to beat me”, he told Autoesporte Magazine.

Also in the 1976 season, Senna was the runner-up of the São Paulo Championship in the 100cc category, won the Canovas Tournament, in the 2nd category 100cc, won the “Le Mans” race at the Interlagos Go-kart track and won the inaugural race of the Bauru Go-kart track, in the São Paulo countryside.