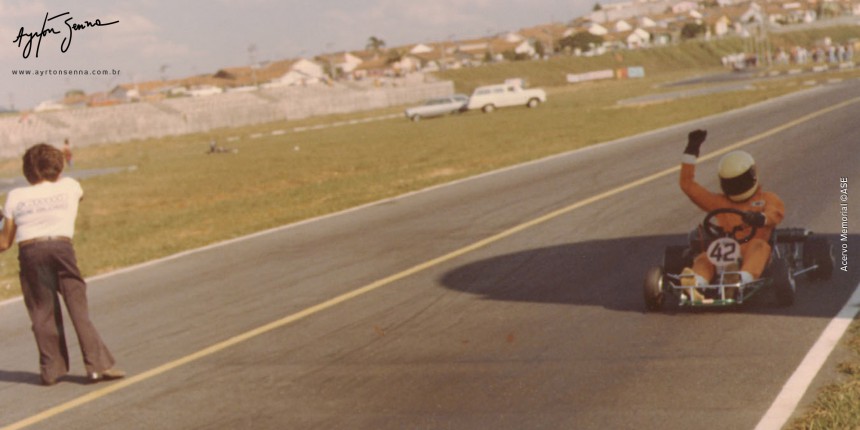 Ayrton Senna’s greatest achievement in the 1977 season was winning the South-American Go-Kart Championship, which took place at the Luis Pedro Serra Speedway, in San José, Uruguay. The runner-up was fellow São Paulo-born Walter Travaglini, who was one of the biggest rivals of the future three-time F1 world champion in his Go-Kart days.

Time trials began on Friday (April 22), when Senna got the fourth position. On Saturday, Senna won two knock-out rounds in his group, but Jorge Soler, an Uruguayan driver, ended up getting the pole position for the first final heat, which took place on Sunday, after winning three heats in his qualifying group.

During the first lap of the first heat on Sunday, Senna overtook the Uruguayan, opened up a considerable gap between them and kept the lead. Soler finished in second place and Walter Travaglini in third, after using tires lent by Ayrton in the second and defining heat. This gesture is an example of the friendship found in go-kart racing despite the intense rivalry on the track (in 1977, Senna was also the runner-up in the Brazilian Championship after a heated duel with Travaglini, who won in the 100cc category, the main one at the time).

The final race was utterly dominated by Senna, while Soler tried to hold Walter back. Close to the end, Travaglini overtook the Uruguayan and Ayrton Slowed down. Both Brazilians ended up crossing the finish line very close together, but with the Uruguayan in second place.

When asked about the World Go-Kart Championship after winning the South-American competition, Ayrton showed concern with the necessary preparation and also with his performance in school – he was 17 at the time.

“I’ll only compete in the World Championship if I have time to prepare. I have to get there at least a month before the competition, so I can choose the best go-karts and good engines. If I’m forced to bring my own stuff, like lots of Brazilian drivers had to do, it’s not worth the effort. But if I want to go early, I need an authorization from my school, allowing me to skip a few days of class, otherwise I’ll have to repeat the year. And I think that’s unlikely”, said Senna in an interview to Gazeta Esportiva, the country’s main sports publication, which covered a lot of go-kart racing back in the 70s.

In the end, Ayrton and his family decided that his debut in the World Championship could wait another year. Instead, Senna turned his focus to the other Brazilian tournaments, winning the “Go-Kart 3 Hours” for the second time, a race also known as “City of São Paulo Trophy”. Once again, he had Mário Sérgio de Carvalho as a teammate, with whom he had already won the year before, beating several of the biggest names at the time. Now, as the reigning champions, they were the favorites to win – and they did, after 189 exhaustive laps at the Interlagos Go-Kart track.

The race’s key moment came along 20 minutes before the end. Walter Travaglini – who had José Próspero “Zeca” Giaffone as his teammate – was in second place and was able to gain 17 seconds on Mário Sérgio. Soon after that, the leader blew a tire and had to race to the pit box so that Ayrton could take his place. The time-advantage fell down to 8 seconds, but Senna held on to the lead until his biggest rival in the season ran out of gas, saying good-bye to his chances of catching up with the winning duo.

At the endo of the three hours, Ayrton received the checkered flag with Giaffone in second place, one lap behind the leader. Also in 1977, Senna was the runner-up in the Paulista Championship once again, just like in the previous year. Take a look at his main achievements that year.