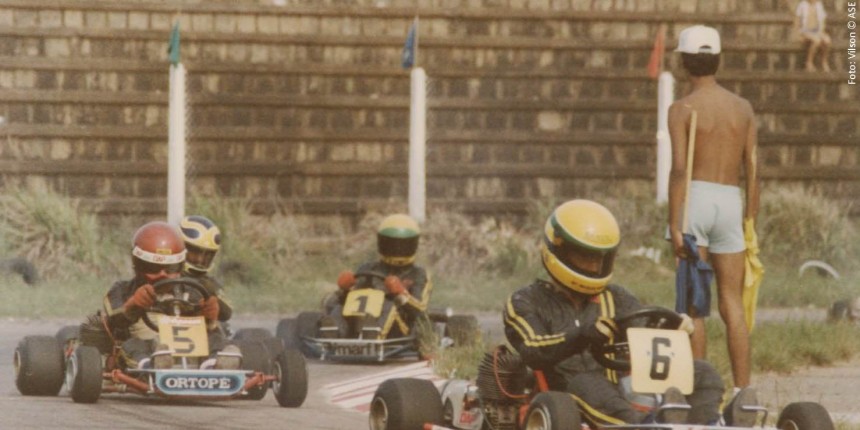 In December 1982, Ayrton Senna arrived in Rio Grande do Sul, Brazil, to pursue another go-kart title. This time, it was the South-American championship, which took place at the Tarumã International Go-Kart Track, in Viamão, a city in the greater Porto Alegre region.

That weekend, the driver thad was his biggest rival was Neco Fornari, a Porto Alegre-born driver. On Thursday’s first practice sessions, Ayrton beat the track’s former record in almost two seconds. While several drivers just watched in awe, Fornari tried his luck and managed to go faster than Senna, lowering the circuit’s fastest time from 35s to 34s. later that same day, when everyone was getting ready to leave, Senna decided to give it another try, and settled another new record.

On Friday and Saturday, more practice sessions and qualifying runs were held and Senna was going to start in second, with Renato Russo on pole – who still holds the record for most Brazilian go-kart championship titles.

But Ayrton landed a psychological blow as soon as the first race started, deploying a strategy that he had developed in Europe and became common place in go-kart racing. He regulated the air-fuel ratio in the engine, while using only his left hand to drive.

Neco Fornari, who started in third, didn’t give up, overtook Russo and was inching closer. They met at the U-shaped turn of Tarumã’s old layout. It went badly for Neco, who ended up pushing Ayrton forward by bumping on him.

Senna won all three rounds, putting up a show with his go-kart number 6 and making it clear why he was a two-time go-kart world champion.

The competition in Porto Alegre yielded one of Ayrton’s last international go-kart trophies before he immersed himself in the British Formula 3 – the natural path he would take in 1983 in his way to F1.